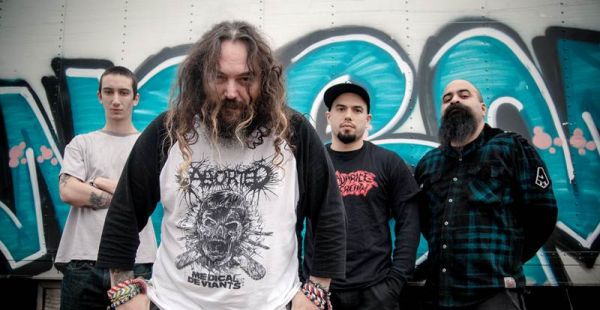 Since Soulfly’s creation in 1997 due to acrimony within Sepultura, lead singer and guitarist Max Cavalera has forged a solid career of ten albums worth of some of the best Metal a man can buy.

Max’s rock solid integrity has built a strong community of fans who drop everything when the Cavalera family tour bus comes to town. This is the beginning of the ‘Maximum Cavalera 2016’, a six week European tour beginning in Nottingham and ending in Moscow promoting their album, ‘Arcangel’ that was released last August. Check out the interview we did with Max last time he was in the city two years ago. https://louderthanwar.com/max-cavalera-interview/

Entering the venue, I manage to catch the end of Incite’s set which is pretty impressive. Richie Cavalera, Max’s step son fronts this tight metal outfit with three albums to their name. Richie is an impressive presence leading the fray, stoking up the metal fires with his passionate delivery. Next up are Aussie’s King Parrot who bring their Melbourne charm and humour to the stage. Funnily enough, lead singer Matt Young does sound like a squawking parrot for the most part but it’s a chunky musical affair with some seriously pummeling riffs. Most of the time, bands this heavy take themselves far too seriously but if you have seen any of their videos you know this band are some right funny fuckers, and they can put on a hell of a show too.

The crowd are really pumped up by the time Max and his Soulfly band mates arrive on stage. ‘We Sold Our Soul To Metal’ gets everyone shouting along to the chorus which a perfect slice of metallic thrash. ‘Arcangel’ & ‘Blood, Fire, War, Hate’ follow in quick succession sounding as powerful as ever. Despite Soulfy’s ability to keep giving their fans amazing new music, the older Sepultura such as, ‘Refuse/Resist’, ‘Roots’ & ‘Arise’ always go down well, straight from the horse’s mouth as it were.

Compared to the past, tonight’s set is relatively short at under an hour long. ‘Prophecy’ & ‘Sodomites’ give the typical groove to the thrash that Soulfly are renowned for and the set closes with fan favourite, ‘Jump Da Fuck Up/Eye For An Eye’. They don’t put a foot wrong musically and with Zyon, Max’s son biting at the heels of his father with his insane drum skills, the talent and musicianship is pleasure to watch.