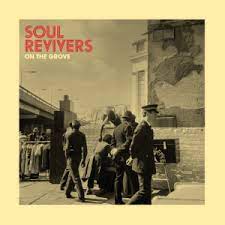 Soul Revivers – On The Grove

David Hill and Nick Manesseh are the minds behind Soul Revivers and have been carefully building up to On The Grove since meeting while working the soundtrack to the film Yardie back in 2017. The general idea the pair have hatched appears to be to make new music that takes as its base the reggae culture from the late 1970s onwards and mixes it with some cool jazz touches. They sought to achieve these ends by utilising the skills of many talented musicians and players, including big names from the history of Jamaican music.

Nick, the more hands-on of the two, has a long performing and recording career that stretches back to the 1990s and plays bass, guitar and percussion on this LP. Dave Hill, who produces On the Grove, for his part was a member of jazz funk act The Ballistic Brothers and has also worked for the Soul Jazz record label.

This duo clearly have a lot of experience in music and that is brought to bear here. Bringing in the help of legends like Ken Boothe and guitar ace Ernest Ranglin (who played with the inspiration for the Soul Revivers’ name, The Soul Vendors), as well as recruiting doyens of the jazz funk scene Ms Maurice, Dougal Caston and Alexia Coley, is a smart move too. On The Grove begins with the lilting, jazz-tinged guitar instrumental groove of No More Drama, with Ernest Ranglin’s fine taste as well as six string talent radiating through it.

It is at this early stage where one realises that Soul Revivers have got a lot right in terms of sound. Ken Boothe’s spoken intro to Tell Me Why gives way to a vocal full of real soul. This is all set to a skanking rhythm that recalls the mid-paced pulse of rocksteady where Ken got his start. Got To Live finds Earl 16 (who has often worked with Dreadzone) riding a righteous rhythm on an effort that just screams dub/roots. We’re again off to jazzier climbs with the opening of Look No Further, before some mellifluous brass work by Kokoroko’s Ms Maurice and Douglas Caston takes centre stage. Then comes Gone Are The Days, a deliciously full confection that is ably sung by Alexia Coley ex The Rotten Hill Gang. The result is beautiful dub reggae with a sharp pop edge and is performed just right.

Matic Horns endow Meanwhile Shuffle with a none-more languid beat and nicely rueful trombone power courtesy of Henry Tenyue. We slow even further on Cee Rocka, where the tenor saxophone of Dougal Caston plays a starring role. This is a neat downbeat sound, a reflective and relaxed instrumental that is boosted by the confidence and talent of the players, with the floating sax and trumpet bouncing off each other very effectively.

Originally recorded by soul giant Curtis Mayfield, The Underground is here sweetly sung by the late Devon Russell. He began his music career as part of vocal group The Tartans, alongside Cedric Myton and Prince Lincoln Thompson. Later in the 1980s he also sang with The Congos. His contribution to this track was recorded by Nick back in 1997, not long before he sadly passed away. This adds another emotional layer to what is a wonderfully soulful piece. Earl 16 returns for the roots-laced and spiritual Where The River and a very danceable Harder has more of Ernest Ranglin’s fluid and purposeful guitar playing.

Alexia Coley is back to imbue Futile Cause with some perfectly judged vocals – she never overdoes things, just lets the song naturally flow and it really works. Down River brings the On The Grove album to a conclusion with more fine, late night chills from the trumpet of Ms Maurice. The bass moves with a sureness and relentless calm that makes it sound unstoppable and keyboards flutter like leaves in the breeze. The whole thing is rock-solid and kept one rapt until the final note.

Nick and David have obviously put a lot of work and love into the Soul Revivers project and it mostly pays off. There is an understated but palpable sense of purpose at work here, one that powers On The Grove along. The production is right on the money and it lets the tunes develop slowly and help the participants shine, setting the scene to deliver a lowkey but absorbing collection. In plugging itself right into the golden history of reggae culture and also contemporary jazz, this record presents a sublime, at times ultra-laidback, listening experience.