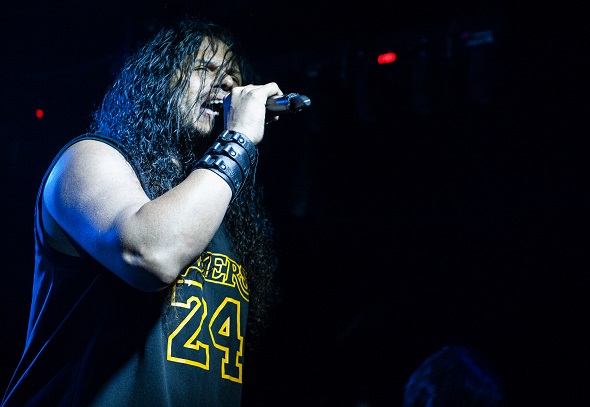 Triple bill of heaviness on a wet Monday evening in town.

Funny the things you hear as you stand at the tram stop on your way home from a metal gig. “I liked him with the long hair.” It didn’t help narrow things down but at least it was no longer raining as it was n the way over, but then, being a test match down the line at Old Trafford this week with the Ashes at stake, you wouldn’t expect anything less. “Rainy Manchester…again,” said Springsteen on his last visit in the middle of Summer a few years back. Schools are back too so imagine all the wet playtimes, accompanied of course by Peter Kay’s immortal “it’s spitting!” I digress. 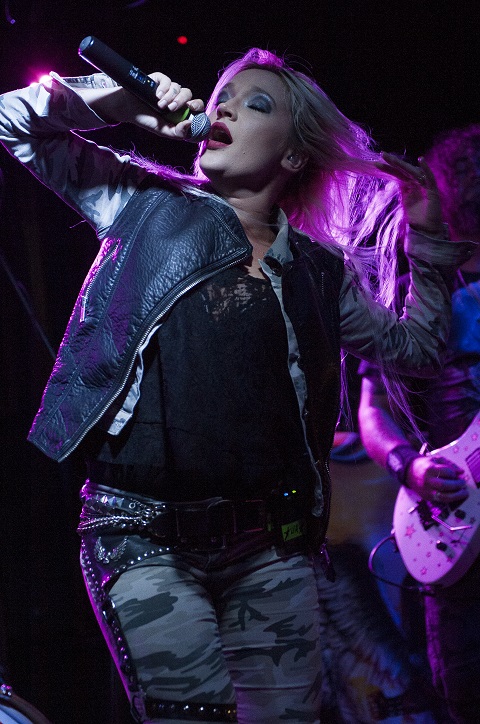 With a sparse crowd in for early doors, Romania’s Scarlet Aura was packed with energy yet getting a response from those who’d made the effort was like (choose from) pulling teeth – raising the dead – getting blood from a stone…etc.  Nothing much wrong with the banter (or the music) from Aura Danciulescu, just that they sadly seemed to fall on barren ground.

Now Stop Stop (or StOp sToP as they are sometimes labelled  – and how it plays havoc with any spelling or grammar checker which is probably what they enjoy) were a different beast. Arriving in the guise of the characters they play in the video for The Last Call. All grey wigs and rheumatics, they soon cast them aside to display a high kicking strut and swagger and weren’t going to let a comatose audience get away with general apathy. An amalgam of hard rock and glam thrust – think a cocktail of AC/DC, T.Rex, ZZTop and Glenn Hughes topped off with a shot of bravado and immeasurable self-belief. Songs like Renegade and Living A Lie saw a synched up guitar swaying and set of moves that were mesmerising. To round things up, off they went into the audience, charging around the venue all up close and personal before their signature tune and carefully rehearsed all fall down at the end. I’d deffo see them again! 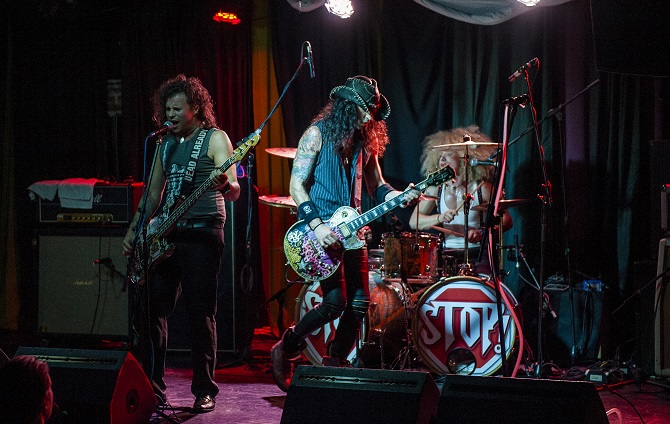 Warm-up duly done, the thought occurred that bands don’t go out anymore (as they once did) to blow each other off stage. It’s now more about camaraderie and support rather than competition, but Stop Stop left Jeff Scott Soto and his merry men some big boots to fill. It was obvious that the crowd was there for Soto. A slow influx from the bar and beer garden and the front of the stage occupied for the first time.

Soto with the Origami album (our review here) pretty fresh Soto took the bold option of not relying on the new material to carry the show. Of course, there big numbers from the album had to feature – the title track, Hypermania and Torn – but took the chance to celebrate the whole Soto oeuvre.  From the solo material to his days fronting the Soto branded band together with a whole host of different bands – the WET medley was excellent – there were very few Soto stones left unturned.  Freak Show, Wrath, Weight Of The World, World Gone Cold all weighed in. If there were a fan poll for the dream setlist, this might have been pretty close.

There was little respite from the constant barrage showing us that every night is a Friday (or Saturday) night. A shit hot band flanked by two outstanding guitarists with some South American gigs under their belts were ready to rock Europe for the next month.  Stage centre Jeff Scott Soto was a giant presence with his distinctive masses of black curls. It’s no surprise that his larger than life personality is in such demand yet his solo work often seems underrated and under-appreciated. There are some epic pieces of melodic prog metal in that library of work commanded by that authoritarian voice.  Perhaps it’s been a while in coming but maybe with this set and this band, Jeff Scott Soto has finally found his place.

All words and live photography (don’t use without permission please) by Mike Ainscoe. You can find more of Mike’s writing on Louder Than War at his author’s archive. He can be found on Facebook and is currently revamping his website…