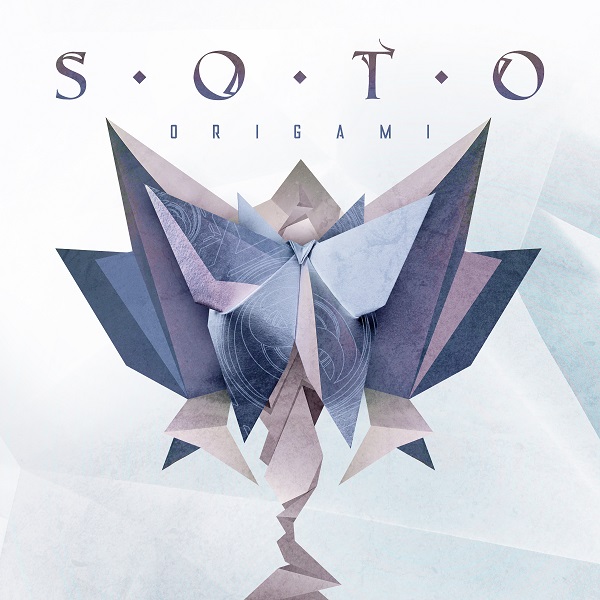 Soto: Origami (Inside Out Music)

Soto, fronted by Jeff Scott Soto, release album #3, one of a long line of releases that feature the dynamic and versatile rock vocalist.

Although he’s been a journeyman musician as the voice of Journey, Yngwie Malmsteen, W.E.T, Trans-Siberian Orchestra and more recently, Inside Out label mates, Sons Of Apollo, Jeff Scott Soto has managed to maintain a healthy solo career. There’s his solo material under his own name, and then the band that bears his name. So here’s the latest Soto offering with Jeff’s name on the label, although to be fair to his team, very much a band effort. It’s a four-piece that sees new bass player Tony Dickinson taking up the role, although the previous bassist, the late David Z has left his mark with his demo parts of sufficient quality to make the final cut on a couple of tracks.

Overall, Origami is jam-packed with big, bold chunks of metal that swing between the hard and fast variety and the more accessible and melodic. An initial electronic bounce that introduces HyperMania soon passes into familiar hard rock territory and a declaration that “this is the moment I’ve been waiting for.” The title track continues the incessant pace and could conceivably be a piece that would have suited the men from planet  Apollo. Talking of which, it’s fellow Apollonian, Bumblefoot, who heads over briefly with his guitar to deliver a fizzing solo full of swoops and dive bombs on the immediate hit of Dance With The Devil. The melodic side comes out particularly on the atmospheric Torn and the blasts of horns that give Afterglow an unexpected brassiness offer an alternative frame to the hard rock picture.

A piece of excellent sequencing has to be applauded as the album has a great finish which, if you’re listening on vinyl, proves to be a belter of a side two. Along with Dance With The Devil and Afterglow, a nod to the “welcome home!” big drama on Vanity Lane precedes an album-closing version of Michael Jackson’s Give In To Me. It may well divide opinion, but the band give it a real hard-edged polish and although instantly recognisable as a Jacko classic, the Soto version kicks and makes a more than passable listen. Better than, for example, what Avantasia did with Maniac from Flashdance on their recent Moonglow album.

Good to see and hear Jeff Scott Soto doing his own thing again and showing why he’s such a highly respected and in-demand singer in rock circles.

Watch  the video for the title track of the album here: