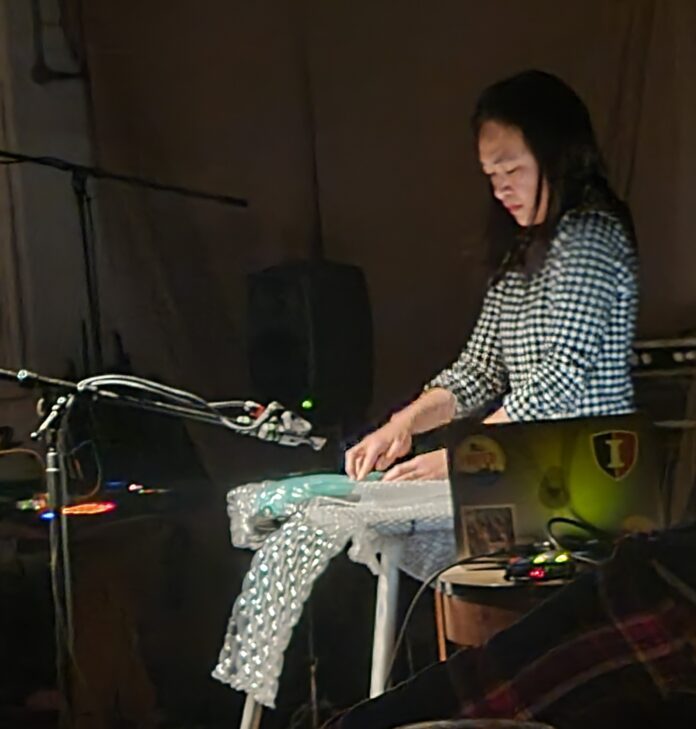 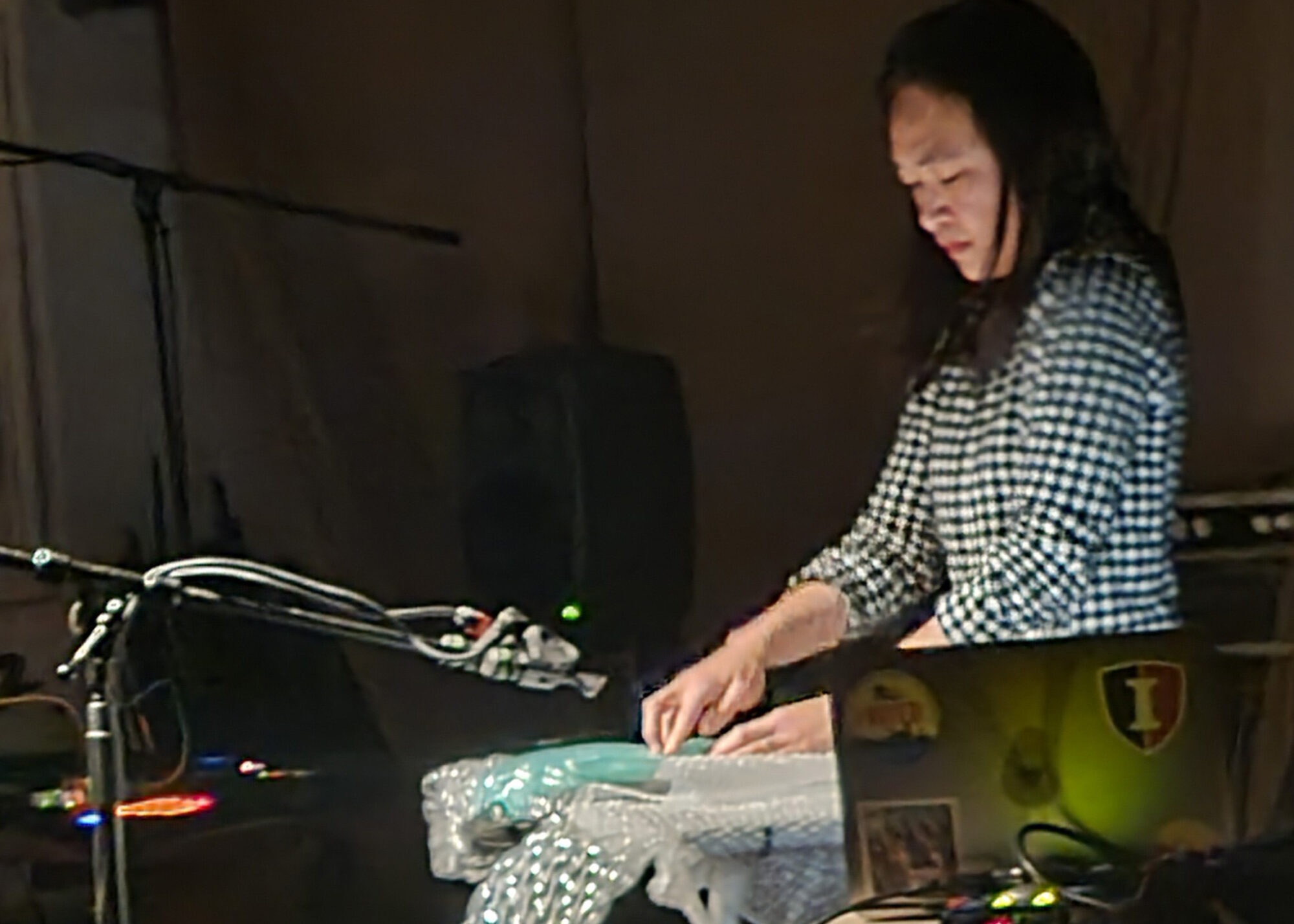 In the best part of 50 years of going to live events I’ve seen some weird and wacky things performed in the name of culture. I’ve seen a man eat lightbulbs and suspend paving stones from his most private parts (Jim Rose). I’ve seen a woman put yams up her bottom while reciting poems (Karen Finley). And a man walk barefoot up a ladder made of razorblades in an abbatoir in France (some Scottish bloke whose name I’ve forgotten).

No one was hurt and no orifices were probed at this event, but it was the first time I’d seen a concert in which the only instrument being played was bubblewrap as Tonia Ko opened a night of intriguing avant-garde experimentalism at a sold-out Cafe Oto in Dalston.

In an otherwise dark room lit only by a handful of candles, Ko was lit onstage, standing attentively with a laptop at her side, from which emitted a faint hum that occasionally changed pitch. In front of her: an illuminated table of bubblewrap in various lengths and sizes, and a large microphone, close enough to pick up the tiniest noise. She alternately scratched her sheets of plastic with her fingernails, drummed on them with her fingertips and stroked them with the tenderness of a particularly sensitive lover.

It made a satisfying sound with a hint of ASMR about it, and I especially liked the fact that in her geometrically patterned monochrome outfit, her costume mirrored the design of her chosen musical medium. I found myself wondering whether the Japanese-American composer, resident in London since 2019, lives in a flat made up entirely of the same design, much like Adam Driver’s girlfriend in the Jim Jarmusch film Paterson, who dresses entirely in monochrome and bakes black-and-white muffins in her black-and-white kitchen.

Ko’s beaming smile at the end, when her work was greeted by enthusiastic applause – and even a whoop or two – suggested she might have been apprehensive about how her minimalist palette might go down with a Saturday-night crowd in Dalston. She need not have worried: Cafe Oto is a haven for far-out experimental sounds and its audience is well-versed in the avant garde. 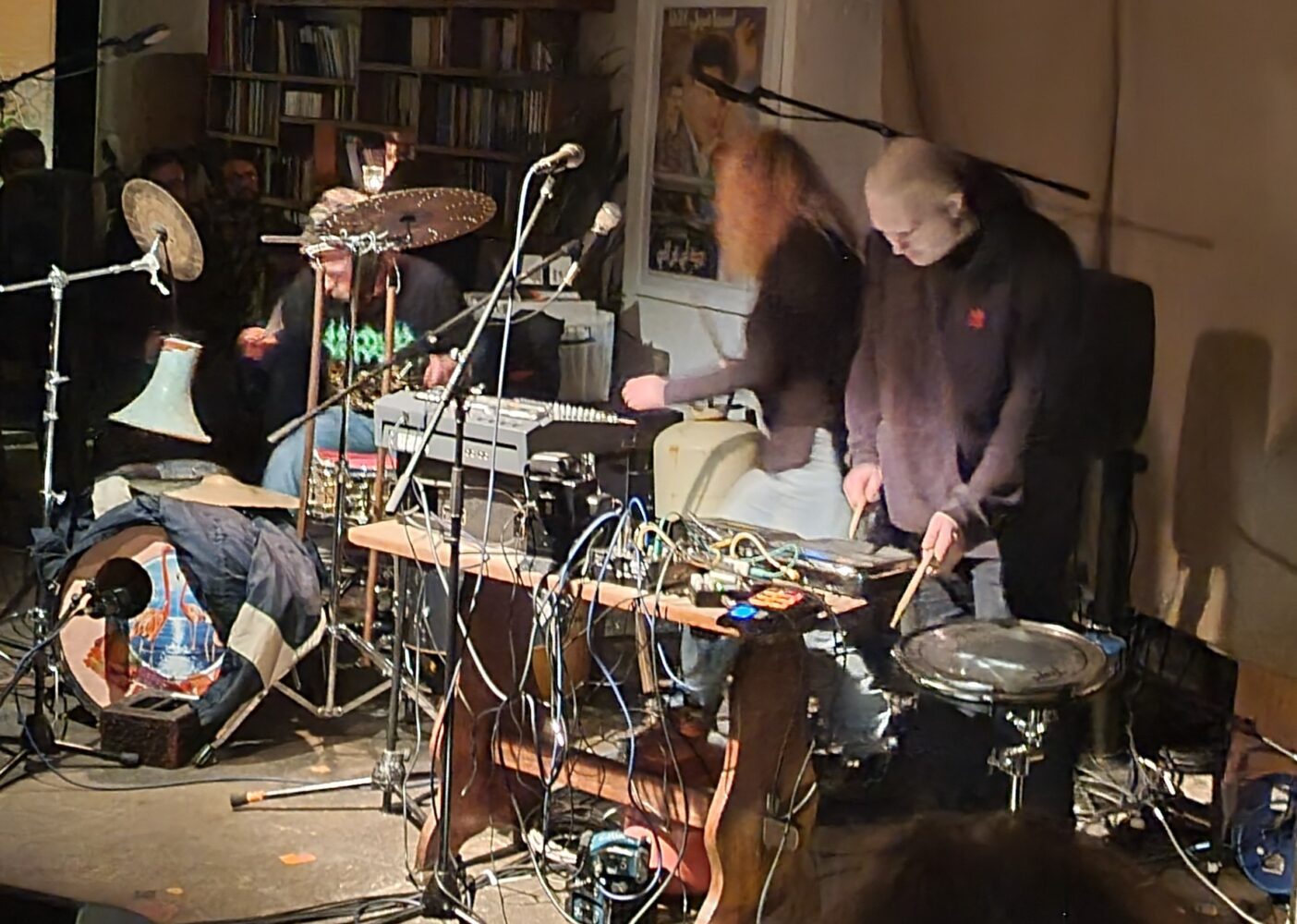 She was followed onstage by a trio from Rochdale called Prangers, who performed with an array of equipment from which dozens of leads protruded, lending the stage the look of a a particularly untidy junkyard, or a recycling centre for electronic equipment. All the more so when it became apparent that some of the equipment was not actually working, and frantic efforts had to be made by a man dressed as a World War One fighter pilot (flying cap, handlebar moustache) to plug things in with new cables. Thankfully, on a night dedicated to experimentalisation, such a glitch only added to the atmosphere.

Once fully connected, percussive sounds began to emerge and a large muslin bag at the front of the stage began to move around with a human shape silhouetted within, as if performing a slow-motion modern dance while trying to escape from its confines. In due course a wild-haired woman emerged from the bag to join the the fighter pilot and another man in a hoodie who was producing dub-like industrial rumbles from a now-fully-connected electronic pad and a pair of drumsticks.

All three attacked their equipment with gusto by beating anything they could find, creating a cacophony of percussive sounds, the woman stopping occasionally to murmer indistinct words into the microphone, and the fighter pilot thrashing at a drumkit to which many “found objects” were attached… at least until they fell off under his assault.

If you can imagine The Flintstones trying to invent Techno, you would find a sound close to the rattling percussive racket they made. And I mean that in a good way.

thriving experimental scene in Huddersfield and took an unusual approach to performance by taking a back seat. Literally. Leaving the stage empty, she sat in the middle of the audience, under the lowest of lights, with a couple of laptops on her knee, and introduced her self-composed immersive electronic piece that played through eight speakers in surroundsound.

It was a soothing, all-enveloping affair and the sort of thing that would probably blow your mind if you were on the right sort of drugs, and it was interspersed with overlapping spoken word sections – some involving ruminations on lockdown – which reminded me of Philip Glass’s Einstein On The Beach, as well as some unexpectedly lovely trombone playing. Alas, having spent a week creating and shaping the piece as Artist in Residence at Cafe Oto, one might have hoped for a visual aspect – some film footage or graphics, perhaps, of the kind favoured by fellow sound artist Ryoji Ikeda, who makes spectacular audio-visual experiences out of his work.

Even with her low-key approach, what would have elevated the performance would have been if Sophie had played her trombone live instead of using a pre-recorded tape; the impact of a spotlight on her as she raised it to her lips in the centre of the darkened room would have been truly dramatic. It would also have been helpful had she given some sort of explanation of the themes and intent behind the piece before it began. Instead I had to resort to the Cafe Oto website to learn that it “ruminates on broken family structures and the unspoken estrangement issue.”

Nonetheless, the alternative – sitting in the dark, eyes closed, letting the soundscape wash over us – was a calming, serene experience; and a welcome antidote to the tensions of the last two years. And for that we should be truly grateful.

More about Sophie Cooper here, and at Soundcloud.

More about Prangers at Bandcamp, and Tonia Ko at her website.