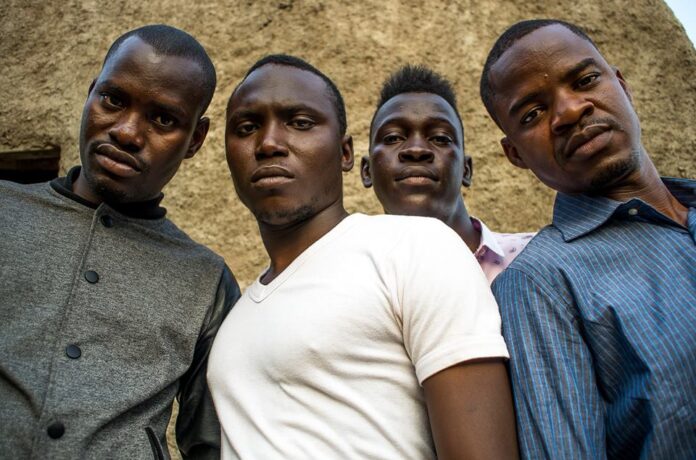 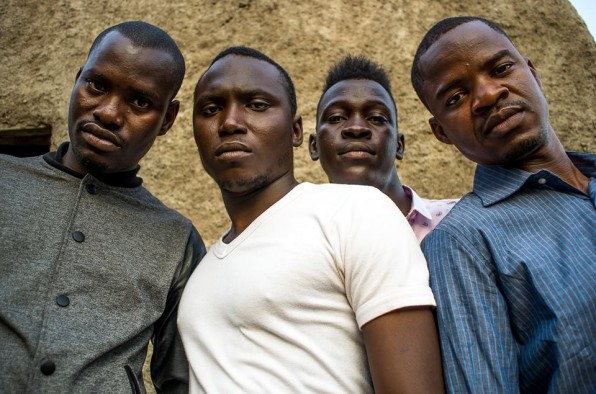 Next time some young upstart appears on our telly telling a bunch of over paid talentless pop stars that singing is all they ever dreamed of doing just before being patronised by some middle aged lard arse who earns a living “predicting riots” from the safety of a big arena stage, point them in the direction of SONGHOY BLUES.

Songhoy Blues exist because they’re not meant to.

This band were forced by civil unrest to leave their home in central Mali when things were so bad that even existing within earshot of a guitar, drum or tin whistle became a life threatening risk. OK, there were other factors as well but we’ll concentrate on the music for the purpose of this page.

Three years ago these chaps relocated to the relatively safety of a town called Bamako in the south of the country leaving behind their friends and family.

They felt they couldn’t wake up every morning and go to sleep at night without (amongst other factors) music in their lives.

It makes the reasons for the existence of our favorite punk rock bands in the mid 70’s seem churlish by comparison.

They formed because they love music and along the way witnessed first hand what they could achieve by simply relocating and giving other refugees some happiness in their lives. Just as you and I (but to a much lesser degree) need it to boost our own moral during our day to day existence wherever we happen to be.

Thanks to The African Express project (Damon Albarn) who introduced them into the UK, and XFM (This is another John Kennedy Xposure evening) we reach the point in this bands existence this evening when we can celebrate the introduction of their debut album release and what an utterly joyous event this turns out to be.

The aptly titled “Music In Exile” gets aired live tonight and one is easilly impressed with the uplifting rythmic hour we witness and glance around this room wondering if we’ve ever seen such a greater reaction from the Barfly crowd crammed in here on a cold Monday winters evening.

Guitar licks that come from a diet of Hendrix, harmonised vocals, basic tribal drumming and over an hours worth of thumping great African blues/rock that the UK’s Transgressive record label deserve a big pat on the back for as a reward for bringing this into our lives. Twice tonight we get to hear “Al Hassidi Terei”, The Nick Zinner (Yeah Yeah Yeah’s) produced track that first set the seed in getting some of us here and we leave happy and almost delerious as we wander from what feels like the heat of a summer’s evening back into the cold chill of Camden Town on a February evening.

We can’t decipher much in the way of what these chaps are singing about and we don’t sense any anger or bitterness, just a joyful sense of celebration as well as some incredible dancing up on the stage that an appreciative audience struggles to let leave the spotlight even after the encore they thoroughly deserved. One feels by the end of the evening this reaction must be a lot more deserved and justified than what our ears are more used to hearing whether in the company of mates down the pub or in front of our TV’s witnessing more and more people attempting to achieve everything by committing next to nothing.