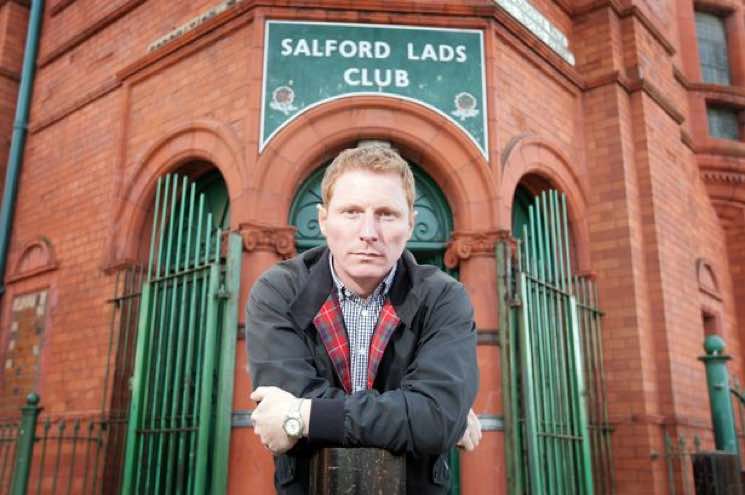 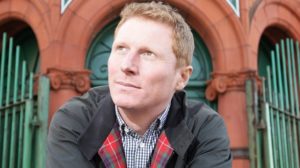 The last couple of weeks have been an overwhelming sad time for the family, friends and fans of the late Inspiral Carpets drummer Craig Gill.  Gone too soon is the oft heard cry and in the wake of Craig’s passing the friends of Craig have pulled together to achieve unprecedented support for Craig’s family to get Inspiral’s hit Saturn 5 to the Christmas No.1 slot. Here we have the personal story from the people behind the campaign and why the whole world should get behind this campaign on behalf of Craig and his family.

Craig Gill. Husband, Father, Son, Brother, Friend and the multi talented drummer of Inspiral Carpets. Add to that Manchester music expert, with a gritted determination to give the absolute best limelight and support to the Manchester music he and we all grew up with, know and love. There have been thousands of tributes left to Craig and his family since his shock passing, none more poignant is the tribute being lead by Craig’s childhood friend Rob McCoy to get Saturn 5 to No.1. With over 30k followers on Facebook at present, it all looks set for the single to lift off to the No.1 spot. I catch up with Rob and other admin members of the team behind this inspiring personal campaign.

With Rob being a childhood friend of Craig’s he was obviously shocked and saddened by Craig’s sudden passing and wanted to do something in support of his friend. Rob ‘I started the group shortly after hearing the shocking news about the death of Craig. I was speaking with my childhood best friend Paul Nichols about it and we were talking about our childhood and knowing him. I recall a few of us going up to his bedroom once which was dominated by his drum kit. As soon as he joined the band (Inspirals) we knew they would be big. We were and still are all very proud of him. We will all miss him as well. Amongst this discussion about Craig I had my Facebook open and received a notification of Fairy tale of New York for number one and said “Lets try to get Inspiral Carpets to Number 1 for Christmas”. The rest is current history as the saying goes. Saturn 5 is a great number by the Inspirals and on discussion we felt it was a fitting song that would be great as a Number 1’ Rob soon drafted in other friends to help out with the campaign. Paul Williams, member of The Rainkings was one of the first to join ‘I caught wind of it on the Thursday (after Craig’s passing) with a couple of hundred members.  More people started to join and it seemed to be chaos with everyone saying download the track there and then.’ Another friend of Craig’s, Dante Friend, was also drafted in ‘We were on Craig’s Facebook timeline all supporting each other (after Craig’s passing). Rob McCoy first went with it, I said yeah absolutely lets do it. We are Mancunians we think we can do anything. Obviously it’s not just a Manchester thing, they (Inspirals) have a worldwide appeal but Craig is a “Madcheser” hero so to speak.’ Joni McDonnell was one of the first fans to get involved and subsequently became a admin for the Facebook page ‘I joined the Facebook group due to being a fan and felt strongly about it and wanted it to happen to honour Gilly and for the Inspirals. I had been quite vocal on Twitter and Facebook about it and I think the admins had seen this. I feel really touched that they asked me and felt that they could trust me to help them to help the fans do this for the band.. for Gilly. For his memory.’ 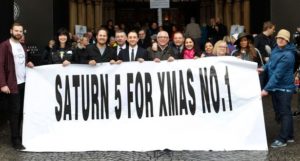 With the Facebook group created it didn’t take long for the Facebook group to build a mass audience. Rob ‘When i started the group i hadn’t realised just how many people out there loved him and was overwhelmed with the love and messages we got. The group got bigger and the current admin team evolved with it. Part of the admin team met in Manchester last week to meet up and get to know each other. We even got to meet Clint Boon as we went to his gig later on.’ Dante ‘It just seemed the right thing to do. It’s a tragic loss. People immediately got involved. We had a spike on the first weekend when word that we’d set up a campaign got out online.’ Paul ‘I quickly got involved knowing that downloading now would have no effect on the Christmas No.1 and was made one of the admins for the site. By Thursday night we had 8,000 members and 13,000 members by Saturday morning.  There are currently 11 admins on the site with fingers in all sorts of pies up and down the country.  The response from everyone who has joined has been phenomenal.  Tweets going everywhere, requests to radio stations, celebs retweeting, buses and trains with ‘Saturn 5 for No 1’, banners at Man Utd and City games. Had a couple of features too in the MEN, Metro and NME‘.

Without taking anything away from all the fans that have joined and supported the campaign, there’s has been hundreds of celebs who have caught the vision of the campaign, including; Liam and Noel Gallagher, The Charlatans, Alan McGee, Blossoms, England Cricketers Graham Swan, David Lloyd, Football’s World Cup referee Howard Webb, Manchester City County Council members and also ITV and BBC TV have shown reports about the campaign, but the campaign is so much more than just getting famous faces in for the ride. Rob’ There are a few famous faces behind the campaign but we are doing this for the fans and people who knew him and loved him.’ 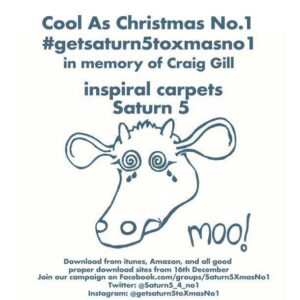 Obviously to try and tackle the No.1 slot will take some doing, what with the usual suspects vying for the top spot, X Factor, Cliff and the novelty corporate Christmas songs, but there is a plan in place to make Saturn 5 the biggest hit of the lot. Rob ‘The plan from the 16th December is to get as many people as possible to download the song and do our utmost to get the number 1 slot. We are hoping for 150k+ but the sky is the limit to be honest.’ Dante ‘We’ll Possibly need around 150K downloads. Maybe more depending on who wins X Factor. We need fans of credible music across the UK to make this their Christmas single and buy it multiple times. If Craig’s kids can understand their Daddy got to No.1 that would be job done. We need Primal Scream fans in Glasgow to download it, the Roses fans, the Oasis fans, the Smiths and James fans, we need people nationwide and across the world to get on this with us and download like crazy from December 16th for that whole week. We CAN do it. David Bowie and Prince fans put them back in the charts when they died but they all went for 3 or 4 different songs. We just need everybody to pick just this one song and back it to the hilt.’ Paul ‘the plan for the week is get downloading.  Even buy a download for your friends and family.  Sales have been drastically different over the past years so there’s no set figure that we are looking at. Just as many as possible. If we get as many as we possibly can, we can’t do better than that.’

Finally, and whatever happens Craig Gill has left a legacy not only to his family but also to his audience. Family man? Inspirals drummer? Manchester Music man? Great friend? All of the above? Paul ‘All of the above. I’ve known Craig through being an Inspirals fan from the age of 15.  The Inspirals have a great relationship with their fans.  We would regularly be invited for a bit of green room/dressing room shenanigans at the gigs.  Craig was always the laid back joker of the band. For me personally its the drummer of a band I had a special relationship with for nearly 30 years.  He will always be the driving beat behind my life soundtrack.’  Joni ”The band are loved.  That is evident at gigs when you see the turn out. Inspiral Carpets have always been a huge game player in the music scene. I’ve always been a fan of the Inspiral Carpets from a teen and now into my mature years shall we say. I actually got to know Clint. I met Craig after one of their Birmingham gigs. I popped down for a brew during the day whilst I was at work. It’s like popping round your neighbours house with these guys because they make you so welcome. The gig got done and it was a chance then to wind down, have a gossip and a dance. They made sure my impending birthday was a decent one. Craig danced me feet off and I had the blisters to show for it the next day. It’s evident that Craig Gill is and will always be very well thought of, notable on the music scene not only for his contribution with his music in the band but for his knowledge too. He really was a lovely guy… kind and so enthusiastic about music. An historian. He is loved. He will be missed.’ Rob ‘Craig’s legacy is to be remembered for “all of the above” Just read some of the posts in the group and you will see just how many lives he touched in his time with the band. Manchester has lost a fantastic talent and we are hoping that this group helps the beat go on!’

I dedicate this article to Craig, his Wife, children and family and anyone that is involved in raising awareness in regards to this wonderful cause. 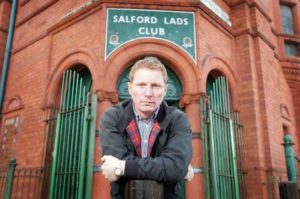