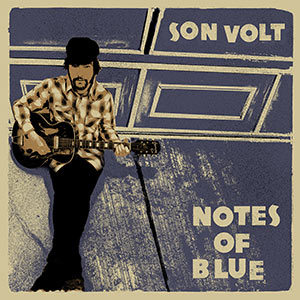 The return of Jay Farrar’s Americana originals with an album that heavily references the amplified blues. Louder Than War’s Joe Whyte reviews.

Following the split of Uncle Tupelo, the band that the whole No Depression/Alt. Country scene was initially centered around, Jay Farrar stayed on very much the same course as his previous band while Jeff Tweedy’s Wilco expanded and experimented to varying success and considerable press plaudits. There’s something about Farrar’s single-minded approach that has always been more appealing to this writer; there’s nothing wrong with Wilco, in fact I’ve loved many of their records, but Farrar has somehow plugged away on a quest to make soulful, rootsy albums that have rarely strayed into AOR territory, keeping the original vision alive.  Last years “Honky Tonk” was a foray into a more down-home, straight country type of writing and was one of Farrar’s more earthy and likeable albums of late.

“Notes Of Blue” is being portrayed (slightly) by its press release as being a record influenced by the blues. It’s certainly not a straight blues album by any means; a few of the songs are played in the open tuning favoured by Mississippi Fred McDowell and Skip James (and there’s a touch of Tim’s Hardin and Buckley at times) but the heart and soul of Son Volt remains intact throughout. It also contains some of the best material that Farrar has birthed in some years; given his pedigree that’s quite an achievement.

Thinking and talking about the blues always seems to suggest something dysthymic and down-at-heel; this album is quite the opposite. “Back Against the Wall”, for example,  is a soaring, uplifting song that has the best of Farrar’s typically clever writing and his world weary, smoky voice against a backdrop of climbing chords and a Crazy Horse-style guitar break or two that simply elevates the song. The honeyed pedal steel flourishes over opener “Promise The World” are a neat counterpoint to Farrar’s bittersweet vocals and the bands chiming chords.

“Midnight” is a smoky, bourbon-soaked skeletal piece with Farrar’s gritty voice atop a fuzzy guitar and sparse drums. “It’s always midnight, way down in hell” is the lament and there’s a huge dose of the sound and feel of New Orleans woven through the song.

“Cherokee Street” is a gleeful stomp and in a fairer world would be a massive hit single. It reminds me a little of Steve Earle or Springsteen in it’s deceptively simple yet clever changes and word-weary lyrics. Farrar sounds a lot like he’s enjoying himself and that’s great to hear. “Static” has the feel of The Gun Club or The Cramps at times; Farrar is clearly having a ball on “Notes Of Blue” and it’s nice to witness a guy playing and recording something that means so much to him whilst enjoying the freedom of being his own man.

Notes Of Blue is released on 17/2/17 on Thirty Tigers on all of the usual formats. The band are on Facebook.