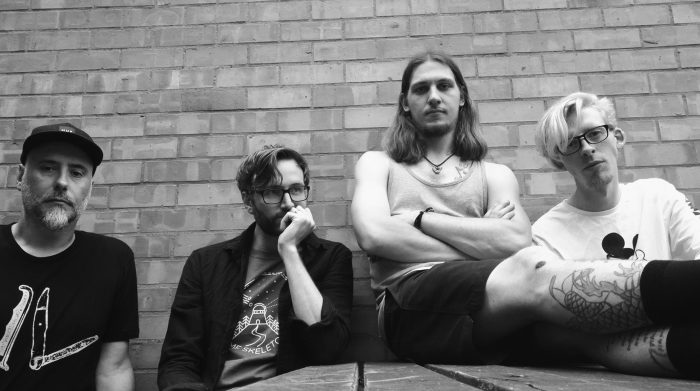 In these chaotic and turbulent days, when anyone with any wit whatsoever is living in sweaty fear of inevitable environmental catastrophe or new school nuclear apocalypse, you need something that shines. One might posit that music has an emotionally instaurative power for we, the huddled masses, more today than for well over a goddam generation. Music has a power to heal. A power to warm. A power to distract and the power to inspire. The ability to make you feel like you are not entirely alone howling at the void that envelops us all. Yadda yadda yadda.

So when you find something that actually shines like a lamp in the whistling dark you cherish it. Or at least you damn well should if you have any fading, one shred of humanity left in your bile-pickled, post-truth, post-shitting-everything soul.

So here’s a four piece band from Worcester – Britain’s most average place (official. it’s a fucking fact. Look – the BBC says so) – that may just do that. They are called Navajo Ace. They use guitars, drums and the human voice and maybe some good old fashioned, gods-honest blues harp. They write songs that are about everything and about nothing. They have American ’90s emo in the Texas is the Reason vein actually in their veins, and make infectious and richly harmonic college rock that makes you smile without a whiff of self-consciousness. They build walls of shimmering shoegaze guitars, with deep foundations sunk into a powerhouse rhythm section that drenches with fucking light. They even recall Frank Turner and the Sleeping Souls… or rather Frank Turner and the Sleeping Souls without the folksy pretensions but with all the limpid songwriting.

They make stuff that lingers on after listening. And that – you can hope – promises more to come. They even make their own videos. Look.

Apparently named after an obscure character in an obscure if pleasingly leftfield 70s War comic, Navajo Ace have various previous form in Nottingham’s Some Skeletons, the long-lost UK luminaries of 90s emotional hardcore Shutdown – and the Andy Cairns-collaborating Thirty Six Strategies. They are sans label, sans distro, and very much Dee-Eye-Why.

With their deep roots in the provincial DIY universe and support slots for the likes of Moose Blood, a reformed Bivouac and the mighty Mike Watt under their belts since their formation in early 2016, Navajo Ace have begun to carve a name for themselves with their soulful and layered indie rock sound. They also have their first full release, Five Turnings, offering some very finely-wrought songs and released on CD this month (August 2017).

We had a little chat with Adam Barnes (Vocals, Guitar) and Chris Burton (Bass) to talk influences – and the place and power of DIY.

“It’s fair to say we have some degree of influence from US indie rock bands such as The Get Up Kids and Texas is the Reason – basically a lot of bands from the “golden days” of 90’s Emo before it became a commercial fashion statement. There are plenty of influences from outside Emo & hardcore, such as US colle, in particular, , shoegaze and post rock. Big influences on Adam in particular growing up were Smashing Pumpkins, Pearl Jam, Idlewild, Death Cab for Cutie, and branching out more into folk like Kris Drever, post rock such as Explosions in the sky, Cougar, Mogwai – and the more interesting end of indie rock. Mew and Jet Plane Landing springing readily to mind.

“The EP – Five Turnings – was recorded at JT Soar in Nottingham – an awesome DIY venue Adam’s old band (Some Skeletons) used to play at all the time without realising that there was a studio upstairs. It was engineered by a guy called Phil Booth, a man well known on the UK DIY music scene. I’m not sure we have a whole lot of choice about whether we release the EP ourselves, but doing so means we have total control over how it is released and how people hear it.

“The guy in NYC who mastered it, Jesse Cannon, is a bit of an authority on the modern music industry and he gave us some pretty sage advice. His view was very much: release stuff yourself, keep control, build a fan base so you’re a decent prospect for a label for album one or two if that’s the way you want to go. But with more and more kick-starter projects and the power of the internet to reach people bands are doing more and more themselves. Not many labels take a punt on a brand new band these days, and generally speaking you probably need to prove you’re decent and that (enough) people are interested in your music before you go down that route – if it’s something you want, that is.

“As we said, although not overtly political there is a definitely a political undercurrent to some of the songs …music can be a very effective way of venting frustration and disappointment at the actions and attitudes of people in positions of power. I guess themes include: nostalgia vs regression and how easily the two are confused, family, class and generational divides, politics of fear / control, death, grief, hope. You know, the usual..!

“A good song can be completely liberating. It can lift you instantly from feeling isolated or misunderstood… and that’s a really powerful thing.”