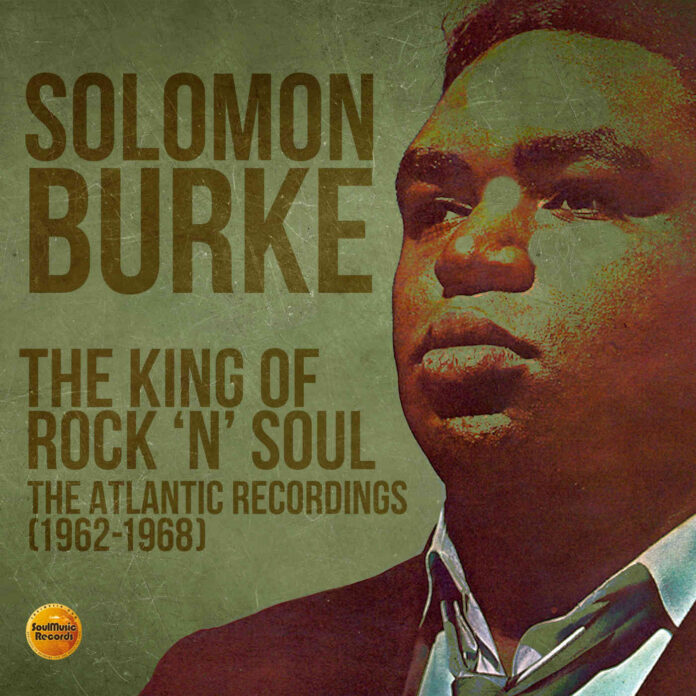 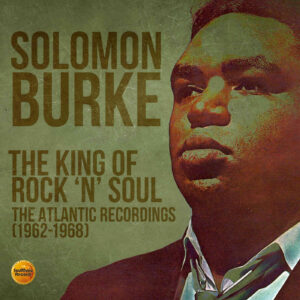 Subtitled The Atlantic Recordings 1962-1968, the title a bit of a misnomer as whilst primarily his key 1960s works, the first disc reaches back to Solomon Burke’s session in 1959 cut for Singular Records, plus some 1960/1 recordings later released by Atlantic….Ian Canty hears the soulful application of Burke’s Law….

Philadelphia native Solomon Burke had a difficult start to life in the tough Black Bottom area of the city, with his father having deserted the household by the time of his arrival. Burke’s mother Josephine Moore worked both as a nurse and a teacher, but she also combined this workload preaching as a pastor, meaning Solomon was born into a deeply religious household.

The matriarch of the family was his grandmother, who had a dream/premonition about Solomon twelve years before he was even born. Acting on this reverie, she founded Solomon’s Temple in preparation for his birth. When the child did finally arrive she quickly set about instilling her religious faith into the youngster. This resulted in him preaching at a very early age and he was involved in community work through Solomon’s Temple for a large part of his life. These early endeavours in front of audiences would stand him in good stead as the years passed.

Granny Moore was also Solomon’s initial musical influence. She taught him to sing in a variety of different styles by helping him copy the voices he heard on the radio. During the early years of his singing career the music and religious sides of his life would sometimes seem at odds and cause him a deal of anxiety, with Solomon wondering if he had taken the wrong path. For now though he began to show both a natural singing and performing talent. When Solomon was nine his mother married Rabbi Vincent Burke and the youngster’s name was changed to Solomon Vincent MacDonald Burke

Being the older brother to six siblings, Solomon helped support the family with a variety of different jobs and schemes. This gave him a strong business ethic for making a fast buck, something that later on would occasionally managed to rub fellow performers up the wrong way. Now though, the money that he raised would keep the wolf from the door, while Burke developed his singing skills in a group called the Gospel Cavaliers. By the time they split, young Solomon was already a coveted talent, with many record record companies looking to pounce. In the end he signed with Apollo in 1955, issuing his first record Christmas Presents perhaps a little unwisely on Christmas Eve of the same year.

Unfortunately this wasn’t a case of instant success, as his mainly gospel based material struggled to make headway. Between 1955 and the end of the decade Burke almost gave up on his dreams. Problems with his manager Kae Williams over unpaid royalties meant he was effectively prevented from working in music. Because of this he enrolled in college in order to study for a new career. In 1959 he had the chance to put his past behind him when offered a contract by the Singular record company. The session he undertook for the label in the winter of 1959 only saw release later, but brought him to the attention of larger concerns.

Burke signed to Atlantic Records in 1960 at what was an opportune time for both him and the label. Atlantic had recently lost some of their big names in blues so needed someone to bolster their roster and their big-time set up would be able to push Solomon to new heights. His mix of natural talent and charisma would work wonders, bringing many years of solid success for Atlantic in the r&b and the US pop charts.

The first disc here kicks off with the three tracks cut for Singular from that November 1959 session. Be Bop Grandma is pure rock & roll with Solomon’s typically warm vocal and It’s Alright a jumping piece of r&b dance. The early breakthrough for Burke was Just Out Of Reach (Of My Two Empty Arms), a very accessible pop/blues item that made the top 30 of the US national chart. From there on in he had a run of medium-sized successes to the end of the decade, when things started to tail off.

By the middle of this first disc Solomon had really found his feet, perfectly voicing a fair range of material in a confident and passionate manner. Self-penned tune Stupidity wasn’t one of his biggest hits but became one of his classics, covered by Dr Feelgood among others. It’s a good example of him at his best early on, with a “shout and response” vocal and brass making for something very cool indeed. Down The Valley, later covered by Otis Redding, even has some proto-freak guitar, an instrument Solomon clearly favoured as it features as lead on a lot of his 1960s work. His gospel roots show through in his full-on vocal style, like on If You Need Me and the carefree, driving r&b of Home In Your Heart shows him at his best. In addition to all this single action he also issued his classy Rock ‘N’ Soul album in 1963, which he was crowned king of at the Royal Theatre in Baltimore the year after.

As we go on further in this set to disc two, we reach the mid-60s when Solomon Burke was at his prime. Great female backing vocals possibly from Cissy Houston and Dee Dee Warwick make an impact on You’re Good For Me, another minor hit single. The much-covered Everybody Needs Somebody is here, but this is the original of a song Burke claimed to have written himself (it is credited to Solomon, Jerry Wexler and Bert Berns). Not a huge hit, but this take is performed with a subtlety lost in the many other versions. Peepin’ is a moving dance groove that was only a b side, showing what strength in depth Burke had at this time. You couldn’t argue with the fact that the short and sharp Got To Get You Off My Mind deserved to be the top side though – a sunny feelgood drift with piano and vocals that are charming. This resulted in his biggest hit ever hit, topping the r&b charts and reaching number 22 nationally in early 1965.

Tender slowie Tonight’s The Night almost repeated the feat as Burke was at his commercial zenith. It is fun to hear him tackle Dylan’s Maggie’s Farm that was on the reverse too. The last two tracks on this disc are ace – Mountain Of Pride is beautifully delicate and Suddenly, a single that made number 19 in the Cashbox r&b charts, is a smooth soul groover that has a little of Time Is Tight in its structure.

Though the final disc here catches Solomon as his commercial profile was beginning to dip in 1966 when a few of his singles missed the charts altogether, this is still an eminently pleasing collection. He has another go at a yuletide record with Presents For Christmas, which as you might imagine comes complete with sleigh bells and an impassioned vocal. 1967 7 inch Detroit City shows the growing influence of funk in soul with some cool guitar and Party People has a similar kind of happening atmosphere as Wynder K. Frog’s Green Door cover, full of good-time energy.

Apart from his solo recordings Solomon also found time to issue a single as part of the Soul Clan – a glittering array of talent that also featured Joe Tex, Arthur Conley, Ben E. King and Don Covay. Soul Meeting, the a side, is a fast moving and irresistible dance soul number and the flip side That’s How I Feel a contrasting country blues number. Both are included and hugely enjoyable.

It’s staggering that a sure-fire dance tune like Save It never made the impact it should have and the deep, soulful pop Why, Why, Why surely deserved a single release. The funk had truly arrived by the time of the Get Out Of My Life Woman/What Did I Say single. Female backing vocals keenly take the rise out of the former’s lyric and some fine and funky guitar and organ power the latter. This disc brings The King Of Rock ‘N’ Soul to a bright conclusion, pretty much wall-to wall greatness.

Solomon Burke’s star dipped in the 1970s, but he made a well-received good comeback in the early part of the 21st century with the Don’t Give Up on Me album on Fat Possum, which won a Grammy. By this time his health was a major concern. He struggled with his weight from his youth and by 2008 he was wheelchair-bound. He died two years later on 10th October 2010.

The King Of Rock ‘N’ Soul shows Solomon Burke at the very peak of his powers. His backing band on these records was often stuffed with legends like saxophonist King Curtis and Bobby Womack, ensuring a vivid landscape for his soulful and perfectly judged vocal performances. The songs he was furnished with were first-rate, plus he himself was no mean tunesmith too. This is a great selection from one of soul music’s key architects, full of heavy-duty charisma, pure talent and dynamism. Just simply wonderful listening that had me itching for the dancefloor too.