Home Music Bands Dream Wife, Girli, The Tuts and Dream Nails team up for a... 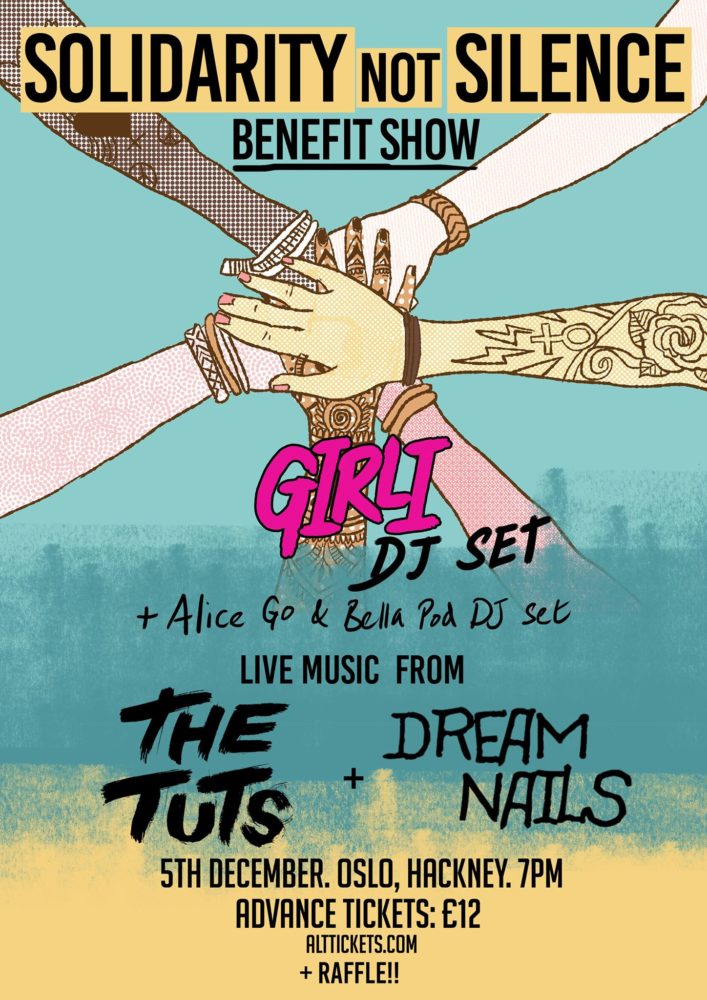 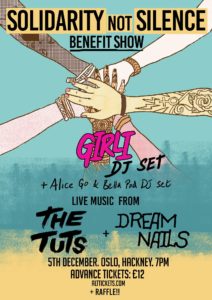 Here’s a beautiful example of badass musical sisterhood in action.

London’s Oslo will host a benefit show on 5 December, featuring live performances from super-sheroes of the DIY punk scene The Tuts and Dream Nails, plus DJ sets from Girli, and Alice Go of Dream Wife.

Proceeds for this not-to-be-missed event will go to the Solidarity Not Silence Campaign, which seeks to help a group of women defend themselves against defamation claim made by a man in music industry for statements that they made concerning his treatment of women.

In the wake of #metoo, with women coming together online to share their experiences of abuse, the campaign has received strong support – with over £20,000 raised so far.

What better way to fight back against the silencing of women than a night of badass women with guitars and turntables.

Tickets on sale here from 11am on Monday 5 November.

Here’s the statement from the Solidarity Not Silence campaign site:

We are a group of women who are fighting a claim of defamation made against us by a well-known musician (hereon referred to as A). We refuse to be silenced and we need your solidarity to fight this case. Read on to find out more.

Our group includes one of A’s ex-girlfriends, one of several of his former partners who are facing a libel claim, and feminist musicians who spoke out in support of these women. Legal papers have been served against all of us. By coming together as a group, we have managed to personally fund our legal defence through the various stages up until the claim was finally served against us in court on 2 August 2017. Not only has this lengthy process been very expensive, there has also been tremendous emotional and psychological impact. Most of us have suffered severely with our mental health as a result, but we refuse to give up.

This is why we are reaching out to you for support. We risk losing everything and potentially bankrupting ourselves in the process. If you help us, we can continue with proper legal representation which will give us a strong chance of winning this case.

In 2016 we each independently made a number of public statements about A’s behaviour towards women. This was in protest against unacceptable behaviour in the music community, a cause we all speak about regularly, and to promote safety. Soon afterwards, we received letters from A’s solicitor and came together as a group in order to support each other.

The nature of this legal battle means that we are already limited in what we can share with you, and we would encourage our supporters not to publish anything more than is in this statement for the time being.

What is defamation and why are we being accused of it?

A defamation claim is a claim brought in a civil court for compensation for publications which are said to cause serious harm to someone’s reputation.  We will be defending our statements as we believe they were in the public interest. We are represented by Bindmans LLP – a well established legal firm with expertise in defamation claims.

What are A’s demands?

A week before Christmas we received the first correspondence from his solicitor where we were advised to find legal representation and ordered to comply with a series of demands by 4 January 2017 (over the holiday period), including demands for compensation, legal costs, removal of our statements, apologies, and agreement not to repeat these allegations, or similar ones, even when they concerned our own experiences.

Why can’t we get legal aid?

Sadly there is no legal aid for defamation cases.

Why do we need so much money?

Our initial target of £9,000 will contribute towards the cost of drafting our defences: the stretch target would cover our legal costs for the next stages of our defence.

Why don’t we just give up?

We cannot agree to these terms and do not want our case to set a precedent for silencing marginalised voices in the music industry and beyond. We need to keep fighting even though we do not have the same power, fame or financial backing as A, as we do not believe that money should be a barrier to accessing justice. We refuse to be silenced and we believe we must pursue justice.

Please help us and support if you are able.

Contact solidaritynotsilence@gmail.com if you would like to set up a benefit for us or have any questions.