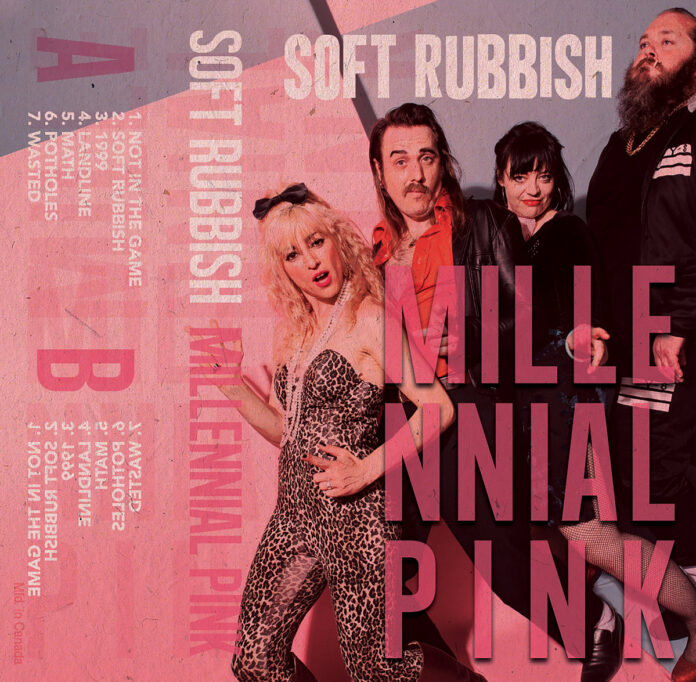 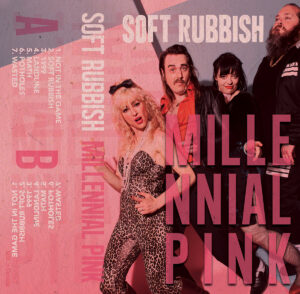 Half of this album is sheer magnificence.  Seven wayward, considered, stream of consciousness pop songs in a post-punk, lo-fi grunge, nursery-psych style but full of charm, ideas, belief and magic.  Soft Rubbish are Australia’s Best Kept Secret, an eco-pop, boho-outsider rock band like no other.

The driving force behind the project, a solo performer when it began, now front-person of the band, Julie Montan tried to explain the concept, at length… it’s a strange, symmetrical product designed to mirror the unusual world we live in and spark questions regarding what we are presented and how we consume..’   The socio-political poetry of the songs become unintelligible experimentation, a yin/yang…  ‘ and will create a dreamlike feeling, reinforcing this desire to question reality and truth – not unlike the feeling of walking through the city centre in our now distorted world.

(In my opinion) it works on the sparser, airy-er songs, but not on the denser, rockin’ ones…

Of the seven songs, four have been released already -so the album is a story-so-far and traces the bands development.  If you’ve never heard them before though it sounds like a complete work.  There are echoes of Siouxsie and the Banshees, 90’s grunge pop, and the kind of kooky boho psych oddness which separates them from more obvious, commercial bands.

The newest tracks: Potholes is a swirling, spiralling piece played by the latest line-up of the band, with some great guitar.  Math too with it’s Banshees gait and lyrics about paranoia and self-analysis is a disorientating delight.

I have written about Soft Rubbish (and the other songs) several times: in Oct 2017 I reviewed the song Wasted a song about Death, obsolescence and love… It’s just a cool, sad song. But it marks the point where you say to yourself; ‘Right, I’m getting my shit together now.  Just piano and voice, it’s still stark, delicate and fabulous. And I never noticed the Patti Smith-isms before

In Sept 2018, the follow-up Landline,  a nursery-psych aperitif – off-kilter. lackadaisical music but with a lot of thought, daydreams and conflicting emotions contained therein.

In April 2019, the quite brilliant Not In The Game – an absolute cracker of a song – and one with which the band could make its mark. One of my favourite songs of the year… an anthem to freedom through non-competitiveness.

and finally in December 2019    1999 where their sound has toughened up in tandem with increased politicisation of the songs. A great song with a brilliant tumbling stream of lyrics.

I do love Soft Rubbish (hence following them every step of the way) – the music, the torrent of mad ideas and enthusiasm from a beautifully crazy woman from the other side of the planet.

Soft Rubbish encapsulates rage against late stage capitalism and it’s failings. We want people to be kind. For power to be put in its place. For air and water to be clear and clean. We want justice for the oppressed. We want exploiters of the underclass and their lands, to be divested of the power to harm. We want animals and nature to be recognised as expressions of “the Goddess” and break away from all regressive patriarchal systems. We are not here to make friends we are here to speak truth to power.

There’s so much pressure on artists today, to create the next big hit, or sound, or following, but fuck all that shit. Soft Rubbish do not subscribe to being told how to fit our eccentricities into some temporary manmade ticky-boxes. This is our album. Take it or leave it but we hope you take it because it’s fucking cool!

The band initially thought putting the tracks-reversed on the album was the first time it had been done but soon discovered Mudhoney put reverse songs on ‘My Brother The Cow’ in 1994 – a 34-minute hidden track named “woC eht rehtorB yM” not included on re-issues.  And the (Jonathan King) Napoleon XIV’s single from 1966 “They’re Coming to Take Me Away, Ha-Haaa!  had the track in reverse on the flip.

If you the hear the songs the right way round, the idea (aedi eht !) won’t put you off buying the album.  It is a homemade work of outsider-rock full of love and ideas… and great tunes. The culmination of years of work and self-expression … and worth every second.

I’ve said it before: Soft Rubbish are Australia’s Best Kept Secret…. but you are allowed to tell everybody.

A launch gig -with ten support acts had to all be cancelled due to the pandemic. The band have no label backing and had spent all their funds on promotion including merch and a special Millennial Pink wine from a local winemaker.  So if you like what you hear… I’m sure they’d be grateful for every purchase. (GB)