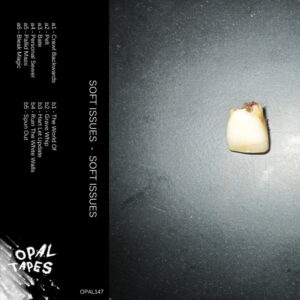 I’m not new to Soft Issues. I reviewed their first EP here and have been a big fan of theirs ever since. Linked to Soft Issues are the brilliant Cattle, which also features Soft Issues’ Chris, who I’ve reviewed several times before here and here. Just to add to this gloriously incestuous Leeds-based soup, I’ve also recently reviewed the brilliant Hoof Glove here that features Cattles’ Steve Myles. So bloody hell does Leeds have a fertile music scene.

Anyway, I digress. Back to Soft Issues.

Soft Issues are a power-noise two-piece from Leeds. Formed in 2017 and influenced primarily by noise artists and hardcore punk, the band opts for a minimal approach from artwork, to release schedules, through to live setup. They’ve released one self-titled EP in December 2017 so far and April 26th 2019 sees the release of the band’s first full length Soft Issues on Opal Tapes (pre orders available now).

Since their inception, Soft Issues have played a number of shows in the UK and throughout mainland Europe, supporting Godflesh, Vibracathedral Orchestra and Mick Harris (Napalm Death) among others. Recent sets have focused on more rhythm-based music. And the album certainly strikes a balance between their first, harsh noise-based EP, and more rhythmic qualities that the band have been influenced by such as techno and beat-orientated industrial music.

Follow-up Pelt has a more beat-driven bent with a throbbing pulse throughout that is punctuated with piercing stabs of noise and creeping electronica. It’s unsettling to say the least. Personal Sewer (fuck these two have a knack for song titles) starts off a more experimental affair with what sounds like recordings of them stamping on sheet metal. This, however, is a prelude to an almighty harsh noise racket replete with harrowing vocals and equally disturbing imagery.

Pallid Mass has a more industrial electronic feel with a rhythmic einstürzende neubauten esque feel to it. Barking, other worldly vocals slowly seep in over the top and soon engulf the racket. Pummelling, unrelenting and unapologetically nasty. This is a stand out track and one of the best tracks I’ve heard this year so far, full stop.

Bleak Magic is as far removed from its tongue-in-cheek track name as you could imagine. It’s a deeply unpleasant and densely layered barrage of throbbing electronica and distorted vocals. Just an unrelenting bombardment of sounds, effects and harsh noise. Another stand out track.

The World Of is a more measured piece that holds back on the ferocity of noise, and layers on a more ambient, atmospheric feel.  And even though it has moments of a harsh racket and (nearly buried) vocals, it shows the softer side of Soft Issues.

Hart Let Update is a throbbing beast of a track. Unrelenting in its pounding hammering and yet again it’s unapologetically noisy and abrasive. The band even went as far as making a video (below) for it. Yet another standout track.

The brilliantly titled Ruin The White Walls is an all out 5.32 minute wall of harsh noise that is punctuated (quite creepily) right at the end of the track by spoken word vocals. Again, it’s a great example of the brilliance of this band and their ability to evoke a spectrum of feelings and emotions through a set of songs.

Final track, Spun Out is another industrial-influenced piece filled with the sound of banging metal, noise reminiscent of a generator’s hum and the continuous immediate and instructive vocals. An unsettling end to a genuinely disturbing journey.

I’ve never taken Soft Issues lightly. The talent that these two are linked to, and the amount of sheer noise that the whole collective make, is quite astonishing. But on their own, they stand out head and shoulders above a lot of noise bands out there at the moment. The reason why? They have a ferocity and love for all out harsh noise that is hardly containable, yet they mangle other genres to suit their degenerative purpose. I think Soft Issues have barely scratched the surface of what is possible with their oeuvre and I personally cannot wait to catch them live. Just brilliant stuff.

Soft Issues can be found via their Facebook page and Bandcamp.