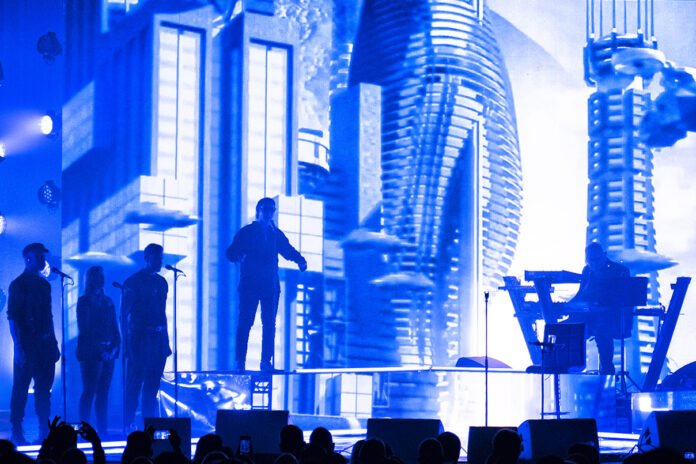 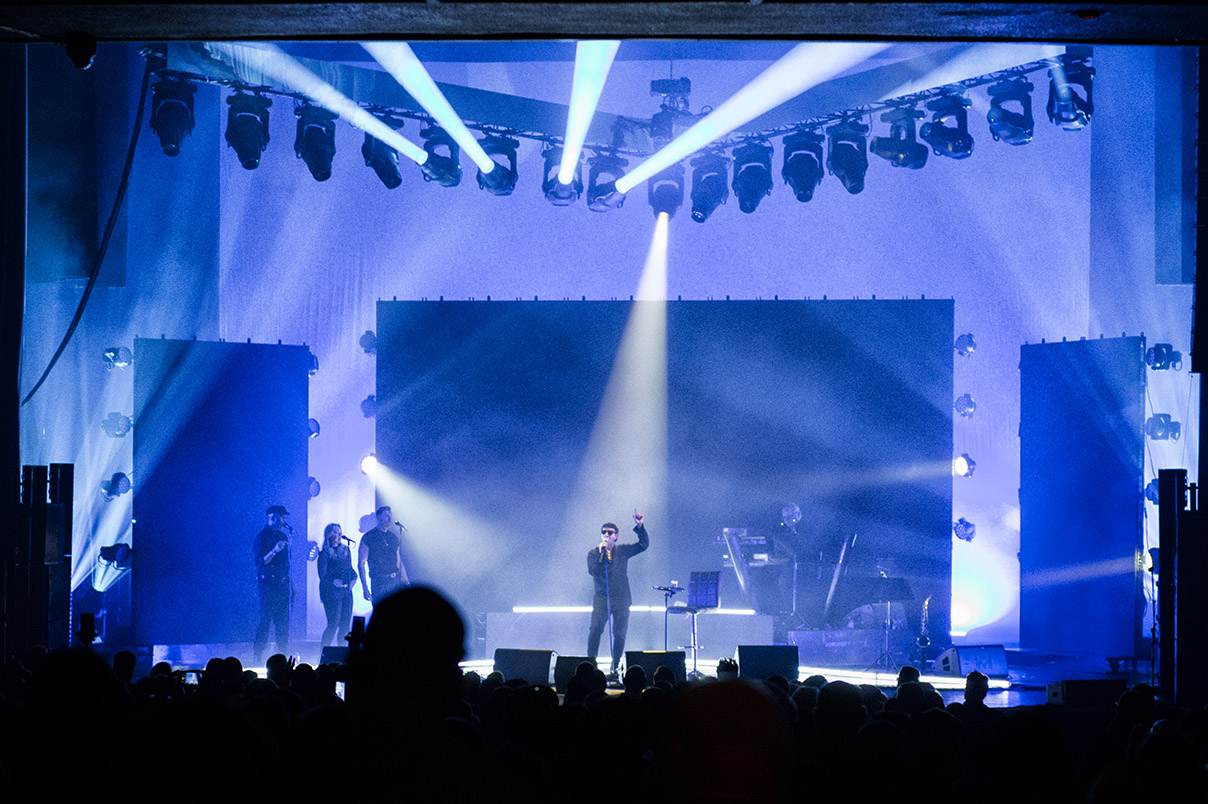 They open with the energetic and pulsating Torch. Its familiarity brings an immediate audience response and proves a great way to start. A spotlight picks out Marc Almond centre stage, wearing shades and conservatively dressed in black. Shrouded in shadows stage right is Dave Ball, surrounded by a bank of keyboards. Alongside him stands sax and flautist Gary Barnacle. To the left are three backing singers. Visually, it’s a very clean looking stage set. There’s no sign of stage clutter; no wiring, no visible amps. 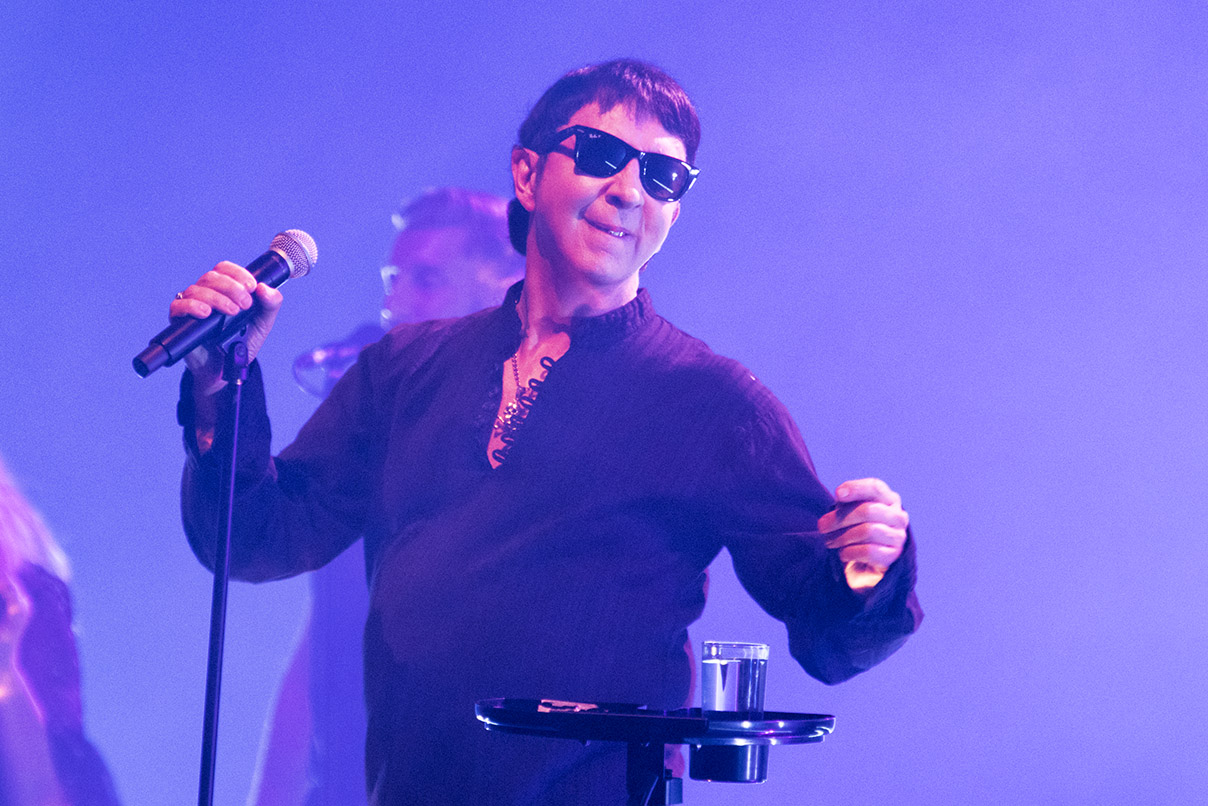 As the applause dies down Marc speaks for one of the few times this evening. He thanks us for coming and remarking that, “It’s good to be back in the North where we belong.” From here onward the tone changes abruptly as we’re immersed in the bleak and forbidding universe of their new album. The brooding Bruises On All My Illusions introduces us to a world of disillusionment in which reality bruises our dreams. It’s lyrically downbeat but the incessant rhythm of the track propels us on, with the lyrics offering just a hint of optimism but it doesn’t last.

Happy Happy Happy dispels any hope of positivity but provides the first glimpse of the audiovisual spectacle to come. Multiple screens burst into life; all reds and yellows depicting images of urban decay. Lyrically, the song clearly references 1970s cult science fiction film classic, Soylent Green. It’s a dystopian world of overpopulation, environmental catastrophe with forced euthanasia where the dead are recycled to feed the living.

Older song Monoculture picks up the pace. Superficially upbeat, it stirs us into life but its message is bleak. We’re living in a society that’s an embodiment of mediocrity and repetition. Heart Like Chernobyl, from the new album, almost speaks for itself. The pace slows as our narrator introduces us to his toxic touch; he’s someone to avoid. He’s living in a world of societal insensitivity where commonplace death surrounds us and the media instil and generate fear and it’s all having an impact. Nostalgia Machine harks back to better times with its classic upbeat electronica accompanied by bright visuals depicting flashy, shiny sports cars. It’s quite a jolt from what’s gone before that works perfectly as a release from the prevailing doom-laden tone. 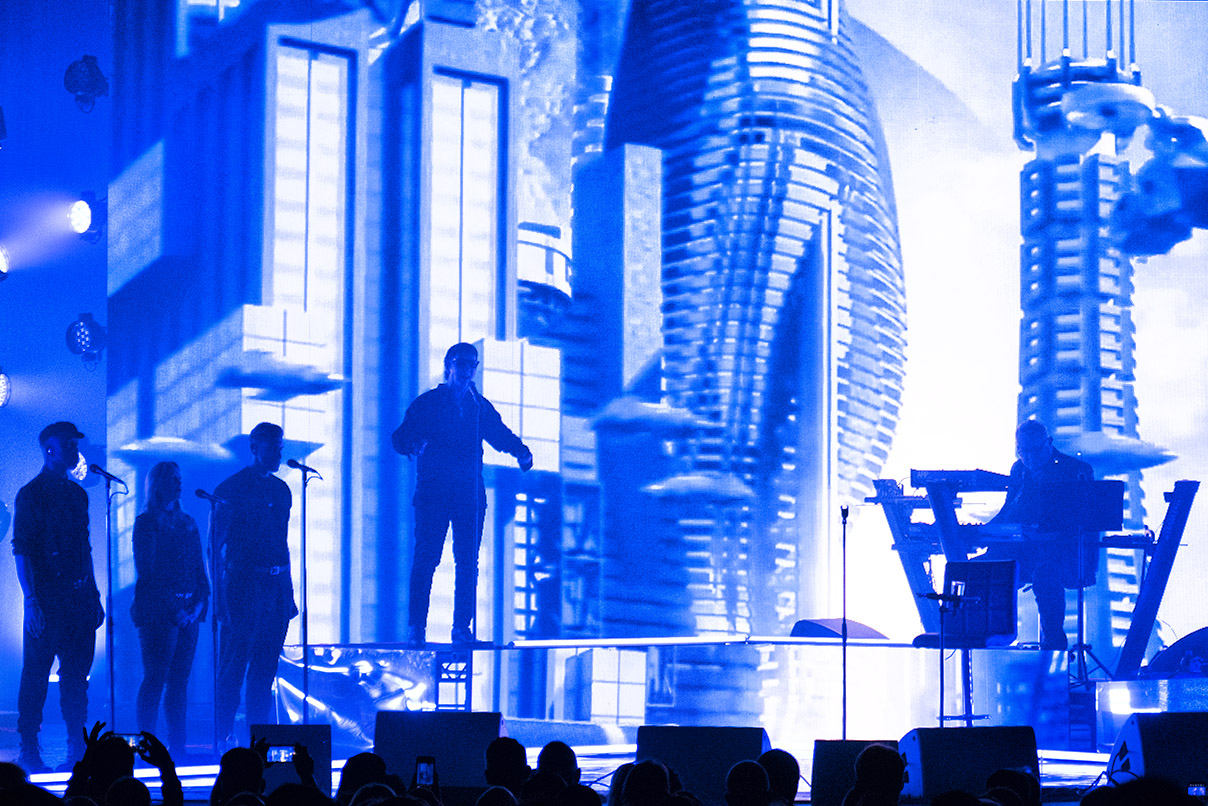 For me, the intensity drops a little over the next couple of songs, but things come back on track with L’Esqualita. Mid paced Latin rhythms transport us into a South American world of sultry sleaze in a tale of lives wasted amid drugs and gangsters. The chorus line, “We could go out to dinner but we’re always on drugs”, says it all. The visual accompaniment is stunning. It’s actually comprised of extracts extracted from the original video but when it’s so effective, why change it.

As COP 26 draws to a close in the world outside, Marc pauses briefly before introducing Heat as a song relating to climate change. His link’s very tenuous, but that does nothing to diminish the quality of the song’s performance. And so we come to Martin. . . Musically and visually it’s a tour de force and the pinnacle of the set. This initially sad tale of mental health builds in momentum into a spectacle of violence and horror as music, lyrics and visuals all combine and escalate into a frenzied climax. It’s incredibly disturbing and atmospheric, and impossible to follow. We need an interval. 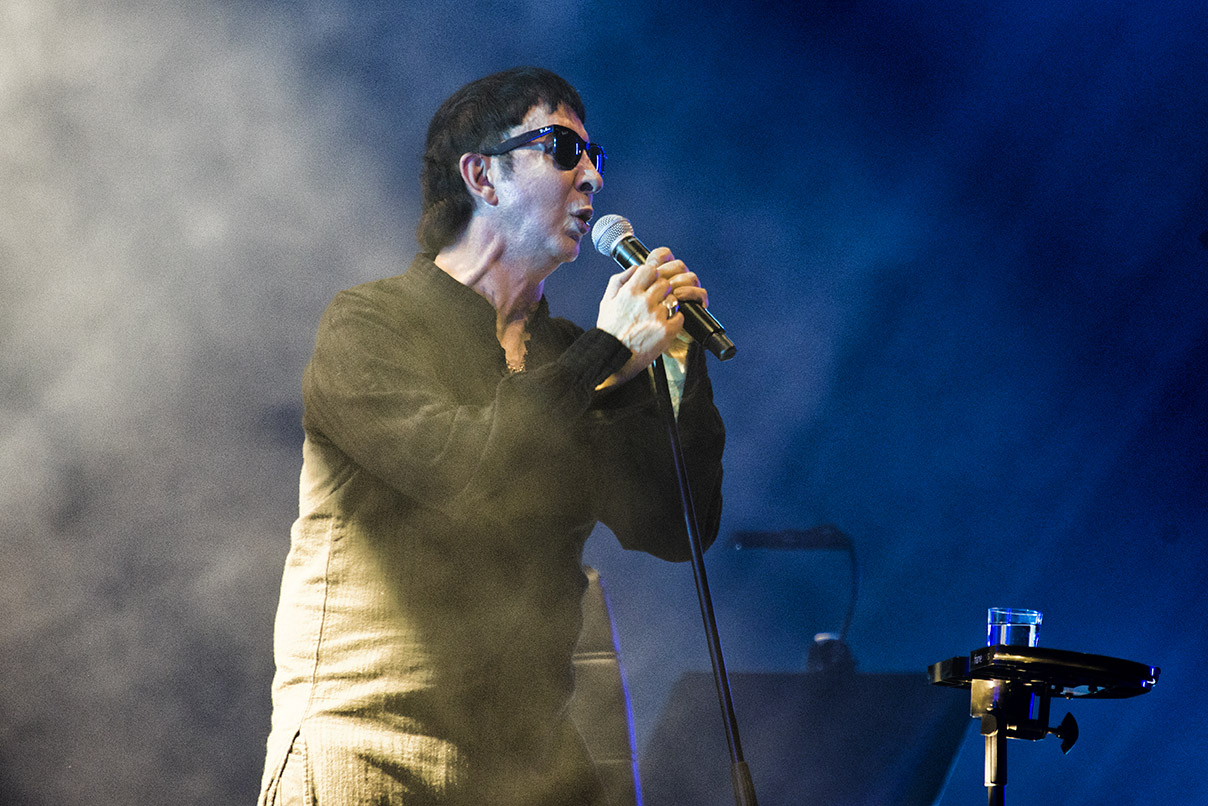 It’s time for us to be transported back to Erotic Cabaret’s world of 1980s Soho sleaze and sexual deviance. Out of the darkness Marc’s repeated screeches of Frustration, Frustration fills the air. Bleeps of electronica build as the song’s pace becomes increasingly urgent, while visually we’re drawn to scenes of suburban domesticity, office boredom that evoke a growing sense of frustration and rage. The track’s generated from a keyboard’s base, but the real power lies in Gary Barnacle’s increasingly frenetic sax. His performance here is stunning but it’s no one-off and it’s no understatement to say that the colour his playing brings to so many songs really elevates the evening to another level musically. 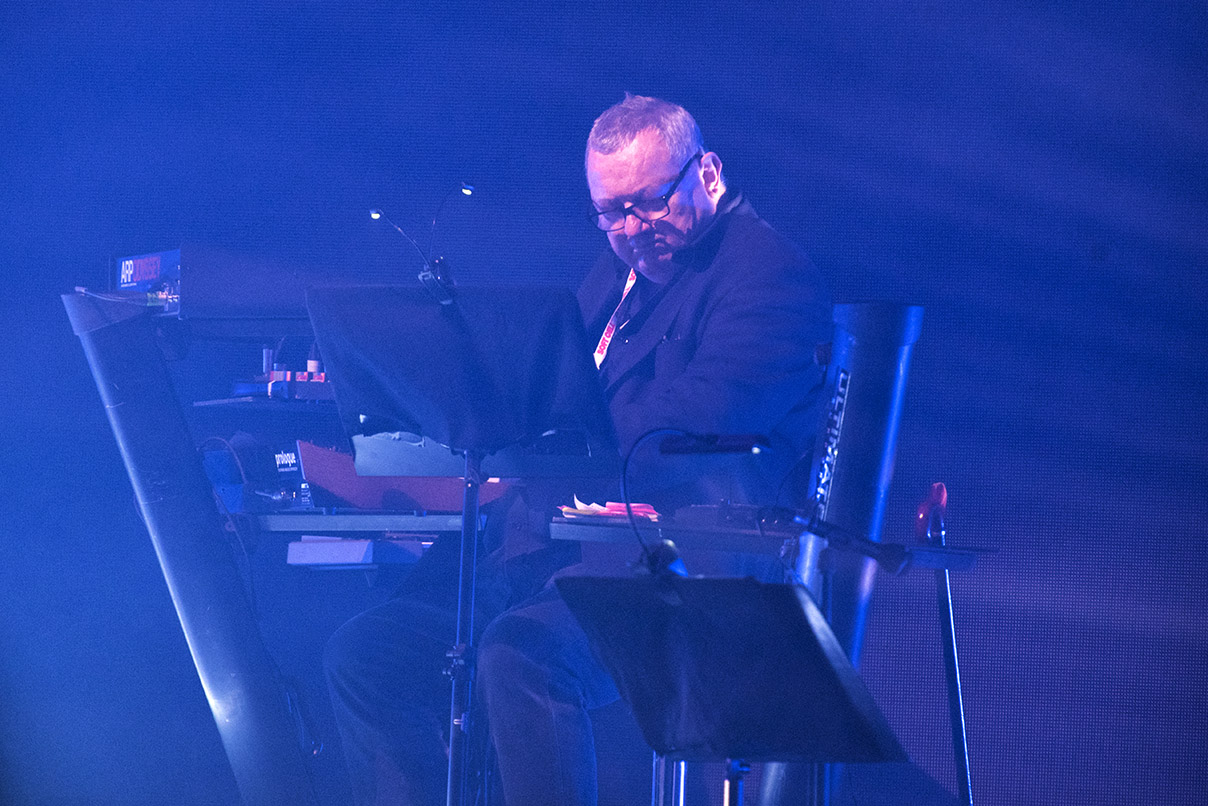 The unmistakable notes of Tainted Love unleash our frustration and transport us to a wholly different place. Inevitably, there’s a great audience response, but visually it’s probably the most understated performance of the evening. The screens fall dark and we’re left with Marc singing in a faintly violet haze. It doesn’t really matter though, his delivery’s impeccable and it’s such a great song that there’s no need for embellishment.

When the applause dies down neon strip lighting illuminates the stage and we’re drawn into the heart of the album. Screens burst back into life advertising Peep Shows and Erotic Dancing amid grainy street scenes from 1980’s Soho. Seedy Films brings to life Soho’s sleazy people, blue films, illicit meetings and groping hands in darkened cinemas and alleyways. Slow in pace with jazz-tinged sax to the fore, it’s a triumph of storytelling. Sex Dwarf draws us further into Soft Cell’s world of sexual deviance. With its nagging, repetitive, woozy keyboards and pulsating beat that gradually accelerates, lyrically and musically it becomes the embodiment of deviant sex as it inexorably pulsates toward a climax. With it comes the best crowd response of the night. We’re at a seated gig but Sex Dwarf’s climax brings many out of their closets and onto their feet. There’s a sense of reality imitating art as people throw off their frustrations and inhibitions, resulting in a concerted outbreak of Dad Dancing.

The theme of sexual deviance continues with Entertain Me. Screens flash with a plethora of giant cards advertising sexual services and accompanying phone numbers. They’re facsimiles of those that surrounded almost every Soho phone box from the 1970s to the ’90s. Marc punctuates the song’s call and response structure with salacious suggestions regarding his backing singer’s sexual proclivities. Bedsitter is the perfect comedown song, relatively slow in pace and a reflection on the night before. Backing visuals make it all the more evocative; taking us on a sombre journey home through rain-lashed London in the blue hour before dawn. 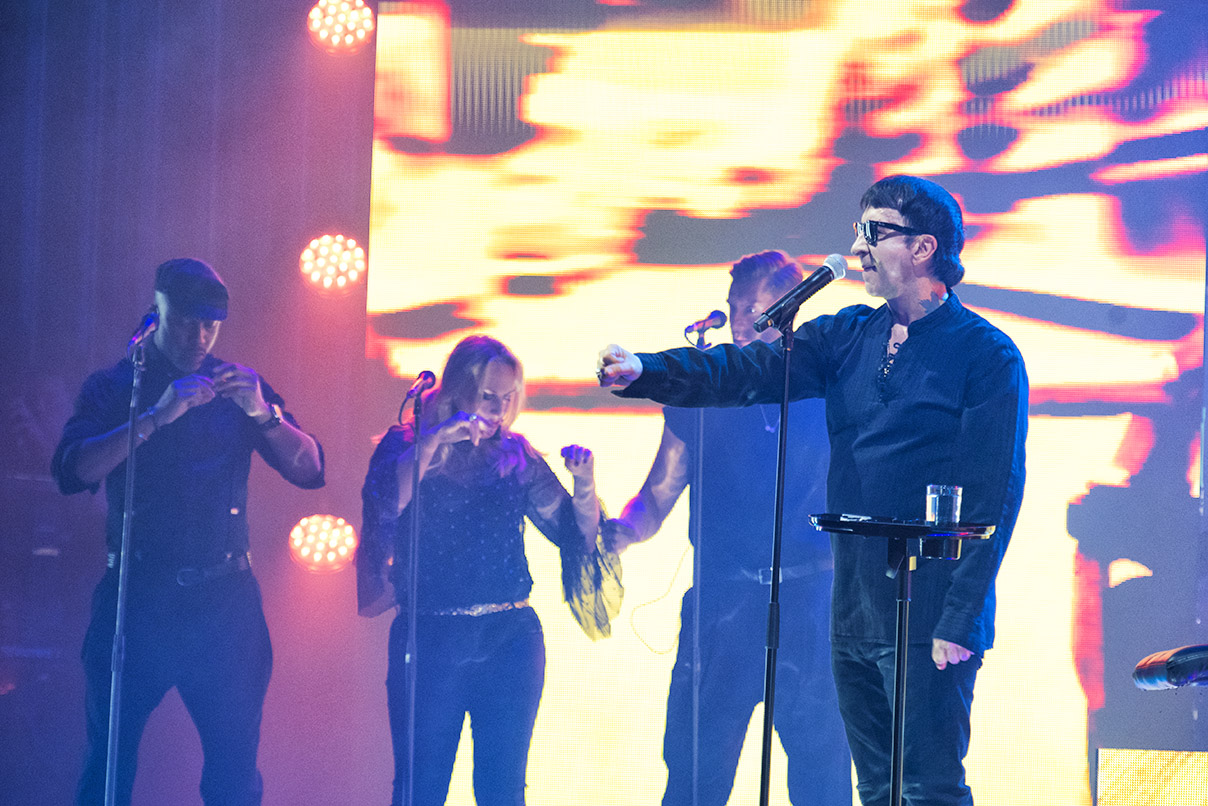 Inevitably, we eventually wind our way toward the climax. When images of pink flamingos flash onto the screens they’re greeted with roars of approval as everyone acknowledges what’s coming next. Marc’s singing has been exquisite all night, but it’s sublime as he croons his way through Say Hello, Wave Goodbye’s tale of failed love. We’re encouraged to join in and the Apollo rings to the sound of massed voices. As the lights gradually fade Marc stands centre stage repeating the chorus for one last time while poignantly waving goodbye. That would have been a perfect way to end but there’s more to come. A quick run-through of Purple Zone brings us to a frenetic closer, Memorabilia. Accompanied by blinding, pulsating red lights directed toward the audience, it’s a euphoric way to finish and a reminder of the band’s place in club culture.

This show has been a real triumph, an almost perfect combination of vocal prowess, musical dexterity and visual choreography. Sometimes you emerge from heritage anniversary gigs wishing you’d witnessed the music when it was conceived. Tonight proves this isn’t always the case. We’ve been treated to a great body of songs, that have not only stood the test of time but live, have seen their impact enhanced by current technology and visuals.

Words by Trev Eales. More work by Trev on Louder Than War can be found at his author’s profile.