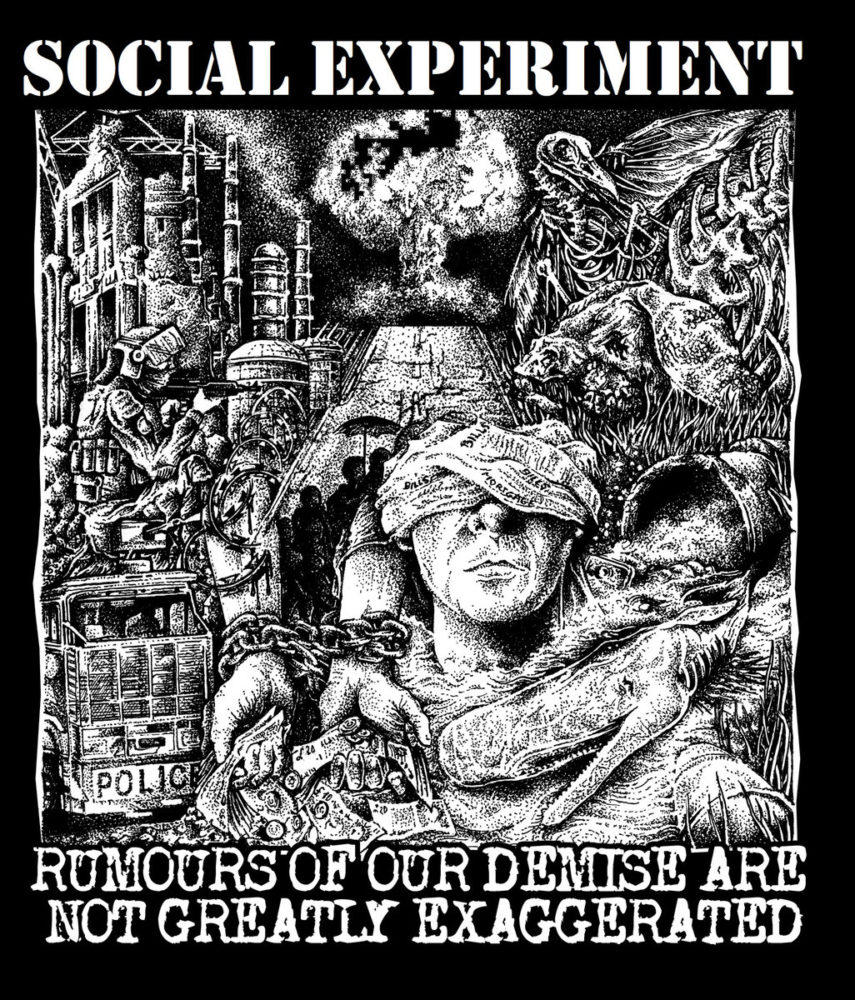 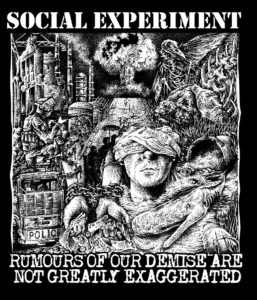 Rumours Of Our Demise Are Not Greatly Exaggerated (Blind Destruction, Moloka, Missing The Point, Mass Prod)

A new band made up of veterans of the Welsh punk scene deliver up a relentless tirade of social commentary wrapped in well played hardcore punk, says Nathan Brown

Taking the old Mark Twain saying and turning it on its head, the cover of Social Experiment’s album gives a fair indication of the message the vinyl inside delivers. Our world is in a state of demise – just look at the way humans treat each other, animals and the environment…it ain’t humane. The lyric sheet, which folds out into a poster, makes the case in well written songs that pack in plenty of words and anger, not taking any short cuts or pulling any punches. At times prosaic, the lyrics have the forcefulness of Conflict when they were at the top of their game.

As the title track summarises: “Look at the world we have become, look at the damage we have done, this is our home, our only one, so why do we seem so intent killing this planet that we rent, the time to act has reached the point of no return”.  Other songs dissect the individual issues that make up this whole.  Like Conflict, animal liberation is a cause close to their hearts.  Unlock The Cage decries the use of animals for testing and ingredients, Tilikum tells the sorry story of a killer whale’s 34 years in captivity , and Bloody Traditions targets hunting.  They don’t just talk about problems, they highlight solutions “Traditions are old and need to end, support the sabs who protect and defend”.  The title of Production Line Soldier is a give away and Box of Lies is a great synonym for your TV.

Meanwhile, It Makes no Sense to Me is a reasonable response to racism.  And while most of these songs could well have been written in the 1980s, Clones is an inditement of the anti-social impact of social media “Humans evolving, there’s an army of clones, just millions of people, staring down at their phones, there’s no real conversation, it’s all updates or tweets, over two thousand friends, but nobody speaks”.

For most of the album the vocal delivery is relentless, much like many US anarcho bands. The obvious comparison would be Aus Rotten, but with a modern hardcore edge and I would even go so far as to suggest Crucifix.  There is also something of Rage Against the Machine at times. And rage they do. You hear it as the words are spewed out – a voice so hoarse it almost reaches a scream – balanced by deeper, gruff backing vocals.  You could be forgiven for thinking this lot are from over the pond rather than over the Severn bridge.

Punctuating songs with nifty little key changes or tempo changes, stops, starts and breaks, Social Experiment draw on lots of styles – anarcho, hardcore, crust, it’s all seeping out. I can hear similarities with Final Conflict, a cleaned up Misery and everybody’s fave stadium crust purveyors, Tragedy. Given that the band have all been around long enough and in various other respected outfits (including Rectify, In The Shit, This System Kills, Rejected, Bring To Ruin and Regret) this all makes sense. We’re all made up of what we’ve listened to over the years. The more I listen, the more I think “Ooh yeah, and that bit is like…” The guitar sounds big, ranging from razor edge heaviness, damping and classic punk 2 string solos to delicate picking and atmospheric melodies with a touch of echo. Some of those atmospheric parts remind me of old Welsh anarcho band Shrapnel or maybe even the Dead Kennedys (Cardigan Bay Ray?). The drumming is of that unstoppable nature, tempo increasing and decreasing but always lots of beats going down, working in partnership with a gnarly bass to underpin the whole sound.

You can get yours from bandcamp and check out more videos via the band’s Facebook page.

All words by Nathan Brown. You can read more from Nathan on his Louder Than War archive over here