Home Music Reviews Album Reviews Social Experiment: Everything Is Connected To Everything Else – album review 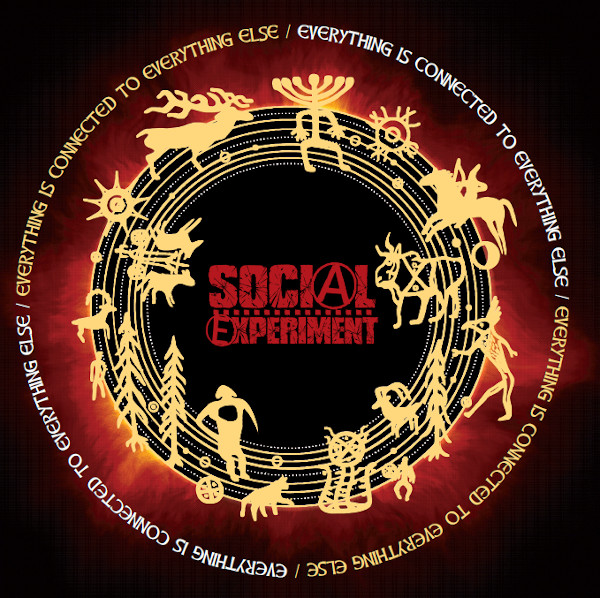 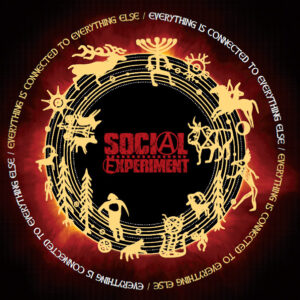 Social Experiment – Everything Is Connected To Everything Else (Blind Destruction)

The second album from South Wales anarchists Social Experiment picks up where the last one left off but mixes more melody into its angry delivery. Nathan Brown says it is a powerful, thoughtful, well executed album that is worth checking out.

Picking up from their previous album, Social Experiment release another bout of socio-political messages. This time round there is a touch more of a melodic twist, but they still retain a heavy hardcore punk sound. Above all, the ranting nature of the vocal delivery still dominates the sound.

The cover by Welly Artcore is also striking, with dramatic cave art motifs adorning a burning eclipse. Combined with the “viking” font, there is a definite pagan feel to the record. A city skyline imposed over cave art accompanies the lyrics. However, Social Experiment are very much in the here and now. They report back on an economic system that is destroying people and planet, a society that is full of hatred, intolerance and cruelty. The album takes us through a series of wrongs that, as the title says, are all connected.

This album has something of a “big sound” to it, which will have been helped by being mastered at the Blasting Room by Jason Livermore (the studio he co-owns with Bill Stevenson of Descendents, All and Black Flag fame). That said, this doesn’t play down the band’s ability to craft good songs that flow properly.

Writing about the last album three years ago I commented on a similarity in the relentless vocals to both Aus Rotten and Rage Against The Machine. That comment still stands for this release. As does “nifty little key changes or tempo changes, stops, starts and breaks, Social Experiment draw on lots of styles – anarcho, hardcore, crust, it’s all seeping out.” In the process of refining their sound, what has changed is there’s a slightly more melodic edge. Many of the songs are fairly technical with tempo changes, stops and complex arrangements.

The lead vocal, as before, is at times angry, exasperated but also breaks into melodic singing which is reminiscent of South Wales DIY punk alumni Four Letter Word (who Welly Artcore sang for) or Rectify. The listener is left in no doubt how singer Puddle feels about the various issues under scrutiny. These are not mere words to fit a tune; emotion drives these words that clearly matter. The doomy backing vocals are an angry raw roar and amplify the anger.

Guitar playing ranges from heavy downstrokes, chuggy palm damping to speedy riffs, pitch harmonics and lead breaks. The drums are heavy and precise. The rumbling, crunchy, rattling, bass fills up the bottom end for a well rounded sound although I’d prefer it to be higher in the mix myself.

Many of the songs follow a pattern of starting out with a problem, rising in pitch and ferocity, and setting out the solution or response.  Towards the end of environmental opener Take A Look Around, it sounds as if you, the listener, are being asked, no – demanded – to answer the question. “So when you look around are you ok with what you see? Are you so self absorbed and ignorant to the debris? At what stage does it get before you start to give a fuck? How long will it take before you change the way you act?”

On the second song, I Don’t Like Your Attitude, the attitude they pour scorn on is “The words you speak, your racist views. Your bigotry, your hateful spew” that a former friend spouts. Stockholm Syndrome is the name for how kidnapped people start to empathise with their captors, and the song draws a parallel with how we can become complicit with the system that oppresses us. It breaks into a beat down halfway through the song with a rhythmic punchy style typically associated with the likes of RATM.

System Failure is very much akin to Behind Enemy Lines when they ramp up the speed. It lays out many of the wrongs in the current “system” which is such an anarcho trope that it risks desensitisation. But there is a system and it is killing people. Social Experiment put a human scale and face on it. Ultimately, though, the politicians can’t be blamed alone. Someone put them there. “Is this what you voted for? Strong and stable, kill the poor?”.

Same Shit Different Day is a hammering bounce-along tune with situationist undertones in its ‘fuck work’ ethic. “Is this what your life’s become?/ Endless misery with no fun/ Forty hour working week/ Always skint cos ends don’t meet”. The hamster wheel slog of what work means to most people is well described “Then repeat five days a week until you’re dead”.

State of Affairs about racist, sexist and homphobic norms that abound in the country. Destitution describes a grim scenario of zero hours contracts, factory closures and job losses as part of the mass exodus arising from Brexit. “Unemployment rises along with food prices”.

Fashion Accessory tackles the problem of people fuelling the puppy farms when they pay for designer breeds while thousands of “unwanted” dogs are euthanized. Social Experiment remind us there is a simple solution – “Think, adopt, don’t buy”.

Thank You – Fuck You is a frank expose of the true attitude of the government to health workers. Clapping on doorsteps while people had to use bin bags for aprons and faulty face masks and the government were plotting the health service’s sale to the USA . The whole situation is neatly summed up in a pair of lines: “Thank you, working 12 hours a day. Fuck you, don’t expect extra pay”

Listen to Thank You – Fuck You on bandcamp or Spotify

Time Waits For No-one is a tale as old as time itself. Age comes hurtling at you and before you know it you feel disconnected. Almost as a summing up, the song Social Experiment questions the lack of resistance to many of the problems outlined in the rest of the album. Puddle screams “We are all a Social Experiment” before observing how we are being manipulated. “Where’s the riots, where are the protests? Where’s the justified unrest? Where’s the vote of no confidence? Are we living in pretence? Are we really putting up with this? The whole charade stinks of piss.”

To finish an album of fairly “heavy” subjects Drinking After The Bell is a fun number. It tells the tale of a post-gig all nighter lock-in and is proclaimed as “a song written for fun times in these dark times.” It even breaks into ska and an echoey reggae drop out before (thankfully) returning to the heavy sounds that Social Experiment are best at.

All in all, Everything Is Connected To Everything Else is a powerful, throughtful, well executed album that is worth checking out.  I’m ordering one myself.

Digital downloads available from the band

Labels who co-released the album: