Home Music So, Who Were The Real Wreckers Of Civilsation? 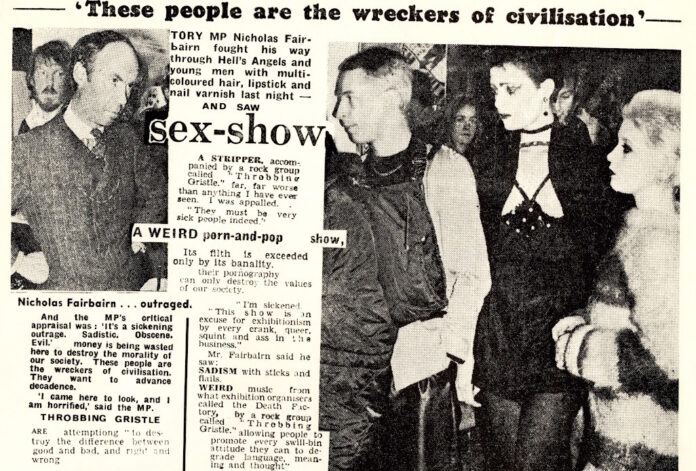 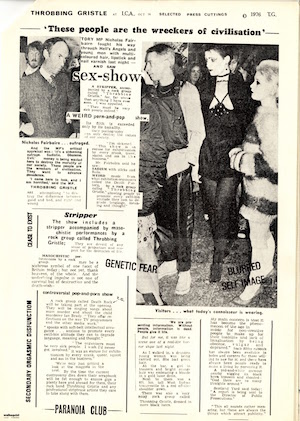 In a typically hard-hitting, to the point and anti-establishment essay, Ami Britton looks at the link between the impact of mid 70s COUM Transmissions exhibition Prostitution in relation to the current news stories of alleged child abuse from government figures and wonders if it may be time for a new extreme art movement.

Once upon a time, one pre-Thatcherite autumn – October 1976, to be precise – an art exhibition took place at the ICA that probably made the mainstream think Carl Andre’s bricks weren’t such a bad idea after all. That exhibition was the now infamous “Prostitution” from COUM Transmissions, the extreme art group who would become better known for their industrial music as the band Throbbing Gristle.

The impact of COUM Transmissions work has not been lost over time. No matter what else appears in contemporary art, their frequently pornographic, unflinching, often blood-spattered (“Cease to Exist”, a feast of sexualised mutilation is particularly stomach-churning even by today’s desensitised standards), and “Prosititution” remains the pivotal moment perhaps not just of their career but of the history of the ICA. It fulfilled all the aspects of what avant-garde is supposed to be, provoking the mainstream, and involving sublimation (using shots from Cosey Fanni Tutti’s pornographic modelling career).

Not only was COUM Transmissions a pivotal moment – it was also their last art exhibition before focusing on Throbbing Gristle – but the fact that it was intended to act as a swansong of sorts did little to quell the hysteria, encouraged by the disdain of Conservative MP Nicholas Fairburn, who visited the exhibition and made his disgust quite clear, labelling COUM Transmissions as “the wreckers of civilisation” spawning laughable shock-horror tabloid articles, and questions being raised in parliament about the nature of tax funded avant garde art.

The ICA stands close to the Houses of Parliament; arts and the establishment physically close but miles apart in terms of understanding. The fact that Conservative MP’s would be so disgusted to think that degenerate art was worth raising as an issue in Parliament has obviously gained new weight in light of the current news story of alleged child abuse from government figures (the Conservatives obviously coming to power three years after the “Prostitution” furore). Perhaps (and I MUST stress I am not making any allegations against Fairburn here, just the general Conservative mentality at the time) there is something in seeing your darker side reflected through art that is simply so unbearable that the issue must be taken further. Oscar Wilde famously wrote in “The Soul of Man Under Socialism” that “the nineteenth century dislike of realism is the rage of Caliban seeing his own face in a glass.” Well, that applies to the twentieth century too – and in this case it wasn’t so much “realism” as a very extreme, sexualised, frequently depraved reality that some government figures allegedly included in their own lives. This essay of Wilde’s also dealt with human masks, clearly something worn by many when it came to the contrast between the upstanding politicians appalled by “degenerate” art, and the degenerate themselves – in the same body. Clearly, the human condition did not change much in a hundred years.

Unlike some other extreme art groups (like the excellent, though admittedly less graphic Vienna Actionists), COUM Transmissions controversially never incorporated any kind of moral intervention, something they continued with their discomfiting detachment in the taboo subjects dealt with in Throbbing Gristle’s frequently disturbing lyrics. This just served to make them more morally reprehensible to some, but perhaps also more effective in the long term – without telling you “this is wrong”, the group merely took analysis, rather than judgement, of taboos which simply forced the viewer to have to make up their own mind – which, of their was a degenerate side to the viewer, would simply force them to confront that. As a fellow controversy-courter, JG Ballard said about his novel “Crash”, it is “rubbing the human face in its own vomit, and forcing it to look in the mirror.” The allegations against these anonymous government figures are getting darker and more disturbing the more that is revealed. The latest horrific story that a boy was strangled to death by an MP during a depraved paedophilia-driven sex party is the stuff of boundary stretching old Gothic novels, and the use of the word “historic” child abuse while these victims will still be suffering today is ridiculously euphemistic. This story seems a little lower down the news reels and people’s consciousness than it ought to be. There is also little causing a stir in the art world of late. Given that, with hindsight we can see a kind of power in the way COUM Transmissions got the press they wanted, and perhaps a few more mirrors need holding up to a few more Calibans, it is time for a new extreme art movement?

All words by Ami Britton. More writing by Ami on Louder Than War can be found at her author’s archive.