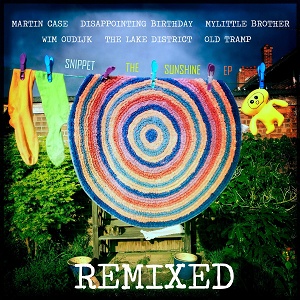 Perfect popster Johnno returns as Snippet with a remixed version of his Sunshine EP. Louder Than War’s Paul Scott-Bates reviews.

When I’ve expressed that my five year old daughter loves We Luv The Sunshine, it’s a huge compliment. Children have no preconceptions about music, they don’t care about haircuts and low-cut jeans, and they know what they like. In the same way that she wriggled and shook to Nine Inch Nails at eighteen months, and she bopped her head to La Roux as a three year old, so she now says “Daddy, play the sunshine song”.

Maybe it’s the catchy chorus of the equally addictive whistle, maybe it’s the thought of the big yellow ball in the sky coming out once more, who knows? Maybe we never will know, or maybe it’s just the art and craft of one of those incredibly gifted people that write pop songs so perfect that it’s almost a crime. Johnno Casson is one such person.

Brought up on a diet of classic pop songs from the early 80s, believe me I know one when I hear one. In Johnno’s case it’s far more than one.

The Sunshine EP from earlier this year proved what an amazing talent he is. Here the six tracks are remixed and given another angle. Misplaced Youth remixed by long-time producer/arranger pal of Casson, Wim Oudijk is one such beast. More several new angles than just one. Violins are added to create a neo-jazz, sometimes Bond theme, Burundi beaten extravaganza which takes the track to another level.

Instrumentals fLIP (remixed by Johnno’s alter ego Old Tramp) and This Way Up are spiced up with added effects and crunching percussion. Lead track We Luv The Sunshine has a superb snare drum effect which almost cuts off before the noise is out, it’s often simpler than the original showing that a great song will always shine through. That whistle is SO addictive.

Run For Your Life is haunting and provoking. A lovely semi-ambient beginning breaking into a base lead meander with gorgeous keys and echoing voices. Highlight of the EP is Can I Luv You remixed by Cumbria’s finest, mylittlebrother where the piano is brought right up to the fore with some subtle handclaps and maybe even your school favourite, the triangle!

The fantastic British Summer continues with this remixed venture. Time to hang your washing out on the line again!