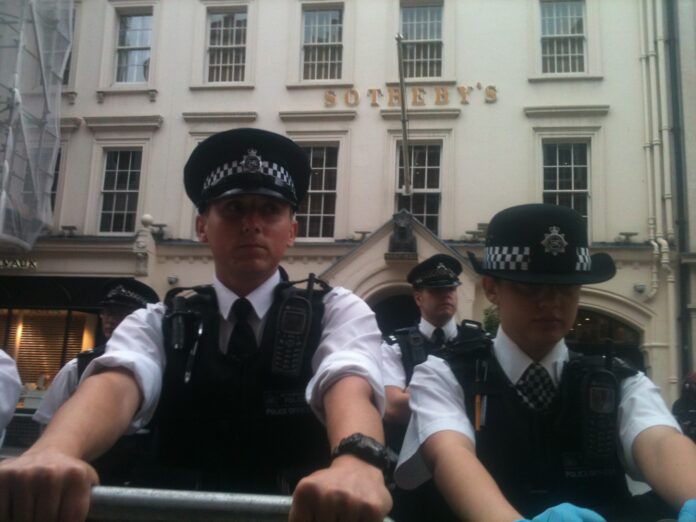 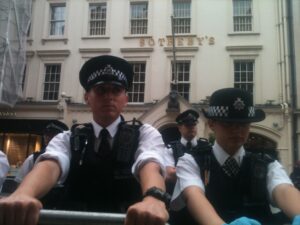 The rozzers were ready. Temporary railings lined both sides of New Bond Street. In the wrong corner Sothebys, a deep establishment corporation with a multi-billion pound turnover and offices in 40 countries. On the other side of the street, the United Voices of the World (UVW), a small self organising union of mostly migrant hospitality workers with no professional staff and the use of one community hall in the East End.

Previously the UVW won a living wage for the cleaners and porters at Sothebys. When they decided to push for some proper sick pay the union organisers were sacked. See elsewhere for details.

We demonstrators arrived as a din and continued as a din. At first we blocked the road trying to get to Sotheby’s door. The coppers, presumably a decision made over a House of Lords luncheon, were not having it and eventually corralled us on the far side of the road. We were a non-stop racket of maybe 150 banging drums, clanging pans, whistling whistles, sounding sirens, honking horns, blowing vuvuzelas, screaming voices. A relentless hoi paloi screw-you to the well heeled of New Bond Street. Beautiful. The coppers passed around ear plugs.

Sothebys have been fencing fancy goods for generations. The loot of Empire and the loot of criminal gangs. It’s called the international antiquities market. Some examples I found with a quick search:

In 1897 British forces looted the African city of Benin. Part of the booty, a 16th century mask, was offered for sale by Sothebys in 2010. The sellers, descendents of a British commander Sir Henry Galway, hopes to pocket a small fortune were dashed by an international uproar that forced the withdrawal of the sale. Like other similarly stolen Benin artefacts in the British Museum, the mask remains unreturned. The spoils of empire. Talking of which, at the turn of the century there was a booming market, which included Sothebys, for Iraqi war plunder such as cuneiform tablets and cylinder seals.

In 2010 Sothebys tried to knock out a 10th century Khmer statue, ripped from it’s feet in the 1970s. The seller, “a noble European lady”, claims she “rightfully” acquired it from a “respected London dealer”. That was good enough for Sothebys who spent years and a fortune failing to retain the statue which was eventually returned to Cambodia. Sothebys certainly knew this was stolen but all threatened charges were dropped. A study showed that over a 22 year period 71% of Khmer antiquities sold at Sothebys had no provenance at all and the remainder had weak histories sometimes amounting to nothing more than previous sales by Sothebys. Basically, it had all been nicked.

These are the rule not the exception. Another academic study showed 60-70% of antiquities going through London auction houses have no provenance. Yes, it is mostly nicked. The examples go on and on. Decades of Sothebys knowingly flogging looted antiquities from Italy, Greece, Syria and Egypt. More stuff pinched from Peru, Lebanon, Turkey, New Zealand and Mexico. Sothebys will even refuse to identify the seller of robbed stuff claiming client confidentiality. Again, as always, with total impunity.

At one point we broke free of the Sotheby’s pen, free of the copper’s kettle, to walk around the block and straight back in again. I guess we hadn’t really thought it through. A smoke bomb was let off. The young, handsome UVW General Secretary ushered some quiet so he could tell us, estuary accent, why we were there. Our attention wavered and the beautiful screw-you din quickly returned. The coppers started getting narky with anyone daring to not enjoy being cooped up in the Sotheby’s pen. People were man handled. Reinforcements arrived. One passerby told me she had tweeted her MP to sign an Early Day Motion on the matter.

Sothebys, exploring ‘multiple revenue streams’, is moving online to sell contemporary art alongside matching furniture. This new direction will see the decline of an expensive sales force hustling the super wealthy at celebrity auction events. In their last efficiency drive Sothebys were partners to a grand price fixing fiddle that eventually cost a $45m fine and over $150m in compensation. They “make markets” and they fake bids, called “taking from the chandelier”. Other Sotheby scams are just hilarious. They sold a box for $28,000 that allegedly contained Duke And Duchess of Windsor wedding cake. The buyers said they would never open it.

Some of us sang Spanish slogans we didn’t understand. The General Secretary led us on another breakout attempt. “I’m not pushing” he yelled in the face of the coppers. Turning round like a pantomime villain “Push” he encouraged us. So we did. Trade-unionists, artists, communists, anarchists and whatnotists all pushed and pushed and pushed as the coppers, arms linked several deep, pushed back until we all fell down in one big non-sectarian heap on the pavement. We helped each other up, gathering lost flip flops and nursing slightly bruised elbows.

A PCS Union rep took the mic. She chastised the coppers for not supporting our right to not be kettled in the Sotheby’s pen. She has been suspended from the National Gallery for union organising. She has a hearing coming up. Could we lend her our support.

A couple of hours after we all arrived the coppers let us out on agreement that we simply marched away. They didn’t follow as we noisily marched the streets around Oxford Circus. A stark indication of their job for the evening: to make sure the staff party, possibly attended by top toff Sotheby’s Chairman the Duke of Devonshire, went ahead unmolested. The party goers remained molested but they were certainly disturbed. They had to sneak in the back door these harried servants to criminal power.