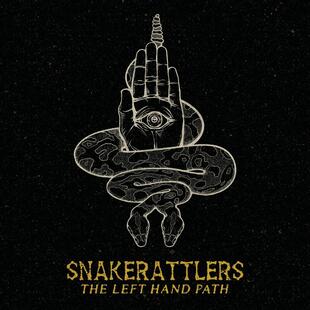 Third album from ‘Out of control, trash rock & roll’ two-piece from York following 2017’s This Is Rattlerock and  2018’s All Heads Will Roll. Still raw, still rocking a primitive live sound, the devilishly devoted couple are musically darker than ever says Ged Babey.

There will never come a time in Snakerattler Dan Gotts life when his wife Naomi says to him – You think more of the band than you do me! You gotta choose – the band or our marriage!  She IS the band – The Band is their Sacred Bond – united in love and rock & roll. They even got married onstage. ‘Do you, take this drummer….?‘

There are a few bands like this: dynamic duos made up of couples – and they always seem to be brilliant.  The Lovely Eggs are probably the best known husband and wife band.  AlterModerns are another musical and romantic partnership.

But surely there is added pressure: what happens when you have ‘musical differences’ let alone marital arguments? I asked Dan, Snakerattlers singer and guitarist.

The thing is we don’t argue about anything! I’m not even joking. It’s pretty miraculous. So it’s not really something that applies to us. We’re basically the other half to each other’s personalities.

Judging by all the arcane symbols on the sleeve art and voodoo rhythms and rhymes in the music there must be some kinda black magic at play here.  No relationship is that perfect. One of them must have put the other under a spell. Tis the Devils work I say!

Probably no coincidence that Snakerattlers are behind dark Scented Candle business The Room Spell.

The Left Hand Path is not available digitally and it’s not been released by an actual record label. I asked Dan why.

We simply didn’t want to release it digitally. That’s the best part of self-releasing. You can do it however you want!

It’s ‘unavailability’ will hopefully make it even more desirable as a physical release and it is a fantastic addition to the bands bone-shakin’ catalogue.

Musically, it is a small step on from Heads Will Roll but the ethos of ‘recorded in a day’, no over-dubs, special effects, brass section etc means the Snakerattlers haven’t ‘progressed’ as perhaps they might have, despite an enforced two-year lay-off.  If they sound this good after a single day in a studio though, just imagine what they could sound like if they spent a week recording!

The more light-hearted songs like the cartoonish Cramps-y Ooga-Booga from the previous album have been replaced with a new-found seriousness and Gun Club like intensity.  Titles like I Remain, All Hope Is Lost, I Want To Leave and We Are Your Hell mark out the territory.  Snakerattlers have a Gothic underbelly beneath their rockabilly hide.

The title track is an almost instrumental with a B-52’s on a ghost-train vocal hook from Naomi and the odd growl from Dan.  A fully instrumental Wolf Dance is Peter Gunn transmogrified and made for chicken-dancing.

Probably my favourite track should be called ‘You Make Me Feel So Small’ – but they chose to abbreviate the melodramatic epic to just ‘Small’.  It’s a massive Ronettes From Hell showstopper which ends with some throat-shredding howls of ‘How-ow?!!’ from the bear-like Dan.

There are plenty of fast, shake, rattle and rollers ( No Friend of Mine, Spooked…) but the more mid-paced, slow-build barnstormers like I Remain are when the Snakerattlers are at their best to my mind.   That said, In The Ground is pacey and dramatic with Naomi’s woo-oo backing vocals increasingly becoming a noticeable trademark.

Hopefully the Snakerattlers will be back on the road again soon bringing their own take on dark rockabilly and garage punk trash to a small venue near you.

In the meantime you should make sure you get to hear the Left Hand Path – it’s the route out of this real-life Hell into a Rock’n’Roll enclave where primitive love rituals are enacted with a twangy guitar, primal drums and a whole lot of whoopin’ and hollerin’. The darkness is exorcised and it’s a whole lot of spooked-out fun.