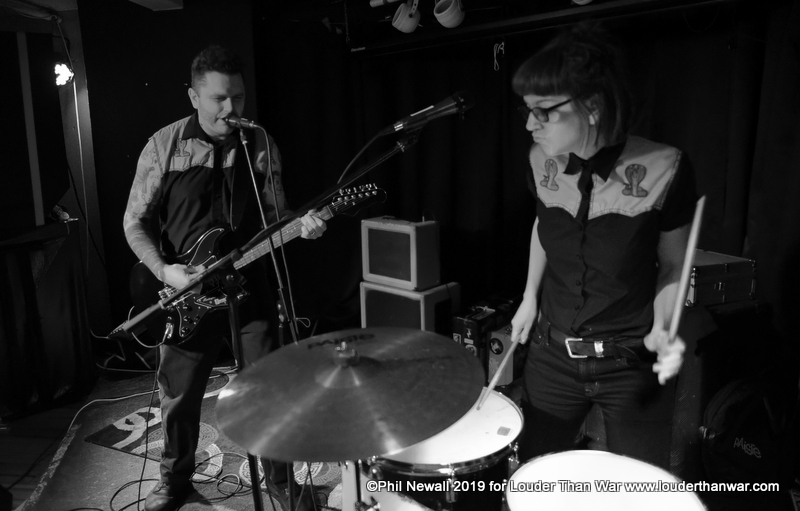 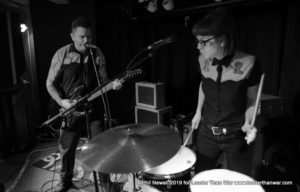 The Snakerattlers brought their ‘All Heads Will Roll’ album (LTW Review) to basement of The Peer Hat, Manchester, the single step up stage and the tight confines of the venue entirely befitting their in your face delivery of born bad rock ‘n’ roll; Dan Gott continues to look like a man on prescription medication, while wife Naomi has transitioned from carer to nonchalant accomplice, they are both dressed in sleeveless Snakerattlers branded 50’s work shirts, both in black jeans and oversized stomping boots, which are ideal when the tunes you are cranking out draw their DNA from the likes of Link Wray, Dwight Pullen and Charlie Feathers.

However, Snakerattlers only draw inspiration from such warped luminaries, there are no covers in the set, this is not a nostalgia trip, as we were about to witness!

Dan stands 90° to the crowd, looking directly at Naomi, stood in front of a simple 2-piece drum kit, adorned with a Snakerattlers banner, she commences the slow drum retort of instrumental ‘Aithers Theme’ the opening track from ‘Heads’ as Dan’s guitar begins to twang, the sound reverberating around the entire room, ahead of quickening pace; within moments Dan is lost within the song, bug-eyed, his body jerking in time to the rhythms, similarly for ‘Lose My Mind’ which sees Naomi pummel her kit, the perfect melt of Mo Tucker and Slim Jim Phantom whilst delivering some sweet vocal harmonies, Dan hollers out a sad tale of isolation during the self-mythology of ‘Do The Rattle Rock’ which has got a guitar lick Poison Ivy herself would have been proud to coax from her Gretsch.

‘All Heads Will Roll’ oozes twisted sexual menace, it’s blackened garage blues, that hints at Jack and Meg but travels to the way more interesting recesses, the places you know are going to be trouble where you will find ‘Rattlerock Rumble’ an energised stomper that sees Dan into the crowd, twisting his way through the startled audience pausing occasionally to yelp the title…

‘Rattlerock Stomp’ borrows a guitar riff from The Cramps ‘Save It’ itself a cover of a Mel Robbins number from 1959… Dan’s psychotic vocal more akin to One Flew Over The Cuckoo’s Nest, all the while, Naomi with a metronomic beat oozing uber cool that is rewarded with ‘She’s Strange’ – a paean from her husband as he offers up “I go weak at the knees when she comes my way”

‘Ooga Booga’ is a full-on highway blazer, a ritualistic hellfire sermon, though even that pales against ‘Snake Rattle Rock, Snake Rattle Roll’… a lean hip fuck of incendiary rock ‘n’ roll, feedback drenched guitar; that solid beat and more of those sweet harmonies.

Snakerattlers delivered their feral rock ‘n’ roll to a grateful and at times shell shocked audience, such is the intensity of the performance; the challenge now is to reach a wider audience.