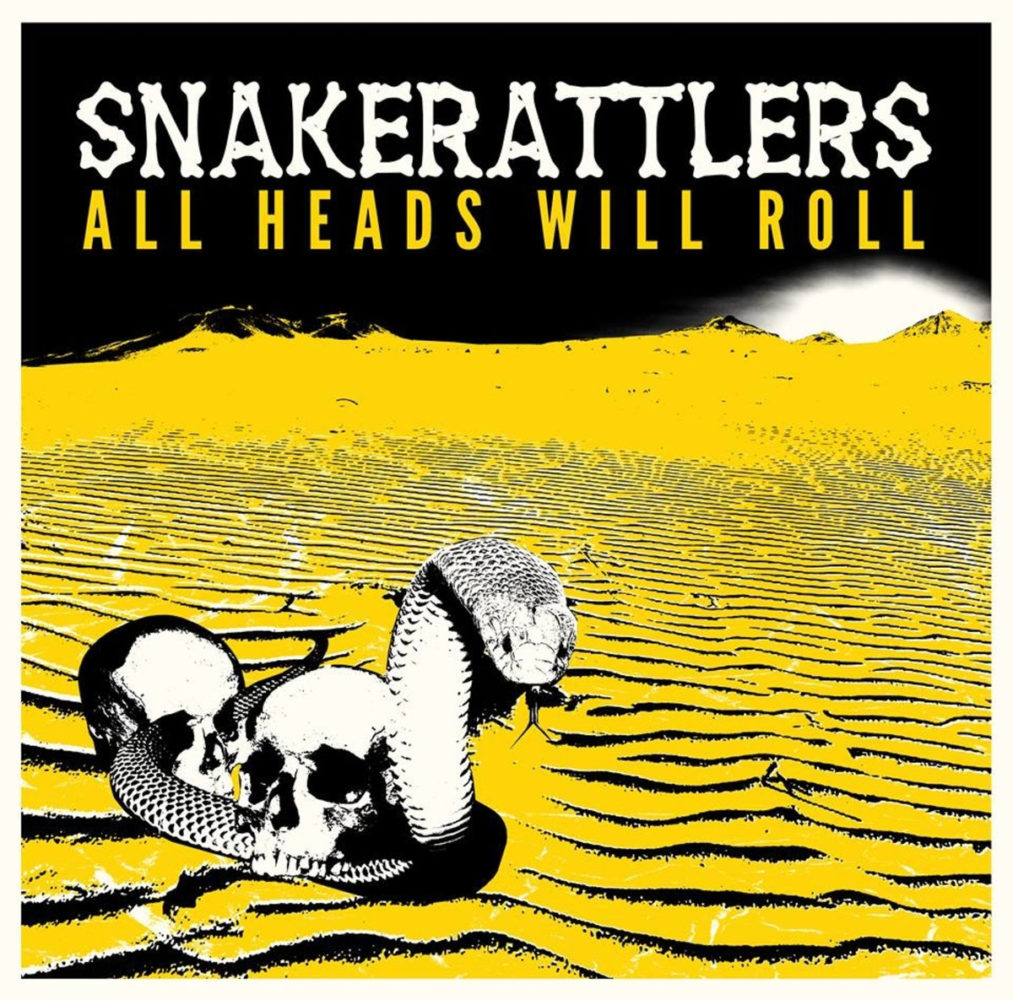 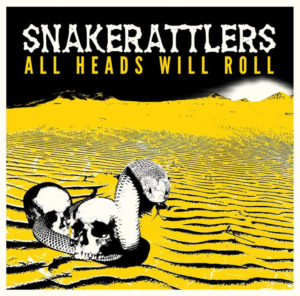 The Future (of Rock’n’Roll) is (Black and white and) Yellow.

They are the colours of the new international flag of Rattle Rock’n’Roll.  Wear them with pride!

This is gonna be a lot of peoples favourite album of the year… it’s back-to-basics, it rocks and it’s a love story.

I would dispute the ‘rockabilly’ tag to some extent as there is no ker-plunk, ker-plunk bass and its more a garage rock’n’roll,  50’s melodrama, Blues-surf-punk sound.   Whatever – it’s just a great, primal, screaming mix of minimalist, maximum rock’n’roll.  “Bit like the Cramps….” is a common comparison.

There will never be another band quite like The Cramps though ..So when people say Snakerattlers are like a two-person version it’s just a rough guide to the area they work in, that’s all.  Dan (guitar/vocals) and Naomi (drums) are husband and wife -partners in crime – Til Death Do Them Part, like Lux and Poison Ivy – but the similarity should end there really…

But, then again, we are talking about a band who make rock’n’roll a fun, cartoonish horrorshow and Alive again!  It’s a back-to-basics by-necessity (the mother of invention) thing.  A duo on the road is far more economically viable than a four piece band,  This is Austerity rock’n’roll.  But packed with dark, leering, gurning, FUN and energy rather than po-faced seriousness and politico-protest.

The difficulty for Snakeratlers is translating their live show – a full-on  sweat-soaked experience – into an album format.  They are so immediate, scary and energising live that its a kind of magic that can be hard to capture in the studio.

The bands first album was OK, but a low budget affair which we reviewed here… but more a blurry snapshot of where they were then, than a full colour, high definition picture, which All Heads Will Roll is.

It opens with Aithers Theme – a twangy  spy theme-tune instrumental which bares a passing resemblance to the Our Man Flint theme tune -and ending with the wild-thing stomp and grind of Wild!  Inbetween it is all killer, no filler:  less than thirty minutes of sheer primal joy.

Standing On My Own is arguably the 24 carat classic in a Town Without Pity kinda style. She’s Strange is pure Tarantino in three minutes fifteen.  Ooga-Booga -a burnout dance-craze monster that’s over before you know it.

The title track – I hesitate to say – reminds me of the White Stripes!  The reason I hesitate is that I, selfishly, don’t want Snakerattlers to become THAT big!  It would spoil the magic of the small venue -intimacy of what they do.

The buzz about Snakerattlers, which has been getting louder and louder for the past year or more is nothing to do with record or promotions company hype. It’s purely down to gigging hard, engaging with the audiences and then word-of-mouth from the gobs of rock’n’roll yobs and aficionado’s as they tell everyone they know, who’d give a shit, about this grrrrrrrrrrrrrreeeeat new rock’n’roll band …. (as I said before)

Dan Gott is a bear of a man , the Blutto to Naomi’s Olive Oyl. She is the coolest stand-up drummer since Mo Tucker. With specs and bobbed-hair she looks like a shy librarian or swotty book-worm but she is possessed with the evil spirit of rock’n’roll and can actually kill a man with one hard-stare over the top of her glasses. Daniel (born in a lions den, lived on raw meat as a child…) can do a fantastic man-insane, teeth-gritted look too… in-between picking out twangy tunes that reverberate and echo as if they were coming from the bottom of a well… or indeed the depths of hell.

I love this part of their biography…

A couple who became eternally bound, when they married on their hometown venue’s stage, a week after their first gig. Snakerattlers is much more than just a band. It’s a symbol of unity and equality between a couple of lost souls, who have been lucky enough to find each other in this mortal existence. A couple who live to make the music they love. Together.

All Heads Will Roll is a raw but crafted piece of work which will appeal to anyone and everyone who loves visceral rockin’ blues.  It is normally the Americans who do this kinda stuff really well, the like of Jon Spencer, the (Surfer Rosa era) Pixies, so it is good to see a British band setting a standard this high with such low-down and dirty rock’n’roll.

Buy from the bands Bandcamp please…