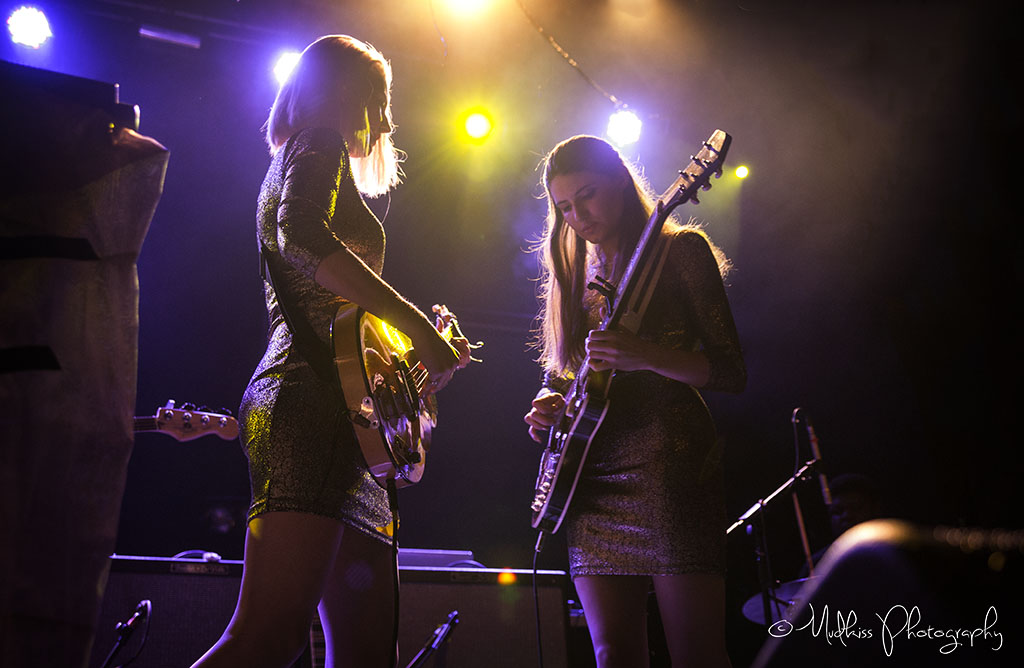 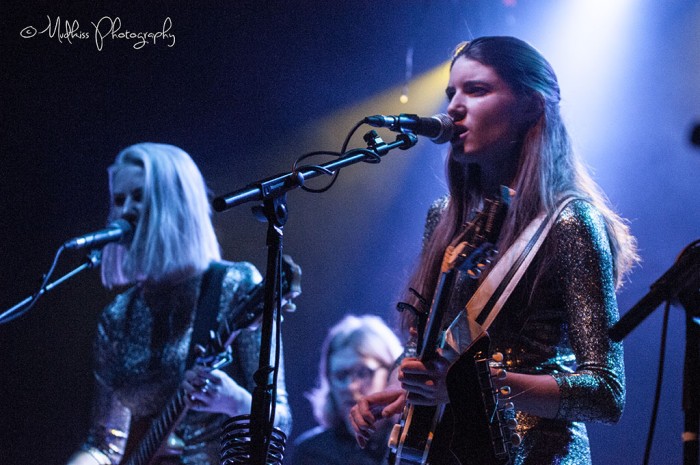 Teaming up again are Melanie Smith (photos) and Clive K Hammond (words) who this week check out Chichester’s finest duo Smoke Fairies. Louder Than War reports back from their support slot with London’s Public Service Broadcasting.

The landscape of modern folk is moving. Electro wizardry is touching it now at a bewildering rate. Behind this shift sits Smoke Fairies. A duo so in awe of it, they decided to become Britain’s finest at it. Here at The Ritz they demonstrate why this ‘unwanted’ fusion is a thing of the past.

Intimate friends of iconic American performer Jack White – to such an extent The White Stripes songwriter featured on their 2009 collaboration ‘Gastown’ (Third Man Records), they were the first UK act signed to Jack White’s label and most recently he flew them to L.A to perform with him at the MusiCares Person Of The Year gala in honour of Bob Dylan. The duo resemble an outfit aligned with the unconventional principles he demands; slinky glowing attire. A spaceship against the generic.

With Jessica Davies – notable for her commanding vocals that are coloured with shadings of Christie McVie and St Vincent – and Katherine Blamire – who’s crafted her voice with darkened tinges of Inouwee’s Kaare Hansen – the explosions of illuminating melodies that resound throughout the auditorium is almost celestial; both bringing damaged enchantment.

‘Solar Eclipse’ – reflective within its feedback bitten guitars with a real saddened energy that filtrates through the barren grooves – was Davies’ chance to disturbingly mutter out her strain. ‘Hotel Room’ allowed Blamire to oppose this lowering temper; twisted within its Ben Howard ‘The Burgh Island’-era depth, Blamire’s vocals explode and interlock with the psychedelic euphoria from the supporting band.

Behind Smoke Fairies’ albums resonates a dreamier, youthful allure. Their tracks often display attested sentiments to the sound of a brighter Wolf Alice meets First Aid Kit temper. On stage – unshackled and buoyantly backed by their championing entourage – the Smoke Fairies beast becomes even more extensive. ‘Let Me Know’ explored within the realms of HAIM; snapping beats blasted against Blamire’s blues fuelled guitar that bodied the skeleton of Davies’ elementary folk progressions. ‘Want It Forever’ – a warped scripting of unrequited warmth – was typically haunting; nuances of Lila Rose complexities rained through alarming synth padding, it introduced a jerking ambience that saw the duo begin shifting across the stage.

The shimmering ‘Living With Ghosts’ felt triumphant against the dimming melancholy; fracturing through its rejuvenated Arctic Monkeys distorted riff, the brittle sound conflicted the angelic vocal collages that towered aloft the marching beats behind it.

‘Awake’ emitted the union that has become a cornerstone of Smoke Fairies’ work. Guitars blinking, driving bass, muttering vocals; all the hallmarks of a blueprint shoe-gaze composition. But by its chaotic climax, the rushing psychedelia that filtrated through the bruising organ and battering drums, the marriage of two incompatible genres became imaginable. ‘Strange Moon Rising’ only intensified this formula.

Supporting Public Service Broadcasting – a group of technical electro pioneers from London that create visionary music through public archive splicing, a hipsters wet dream – is a natural progression for where the Chichester born act are at. In a charming touch, the West Sussex pair joined them to add vocals to the Londoners’ track ‘Valentina’ – a celebratory track considering the first woman ever in space.

Glory beckons for the Southern pairing. For a duo so distant from the headliner, Smoke Fairies’ response was towering. Expect them up North before any other ‘unwanted’ folk groups. 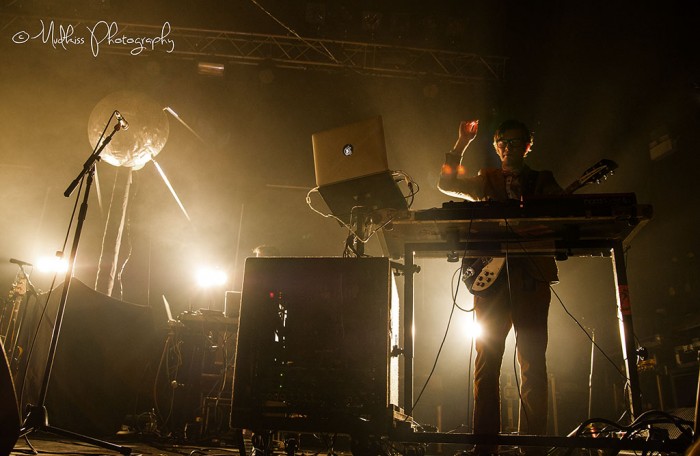 The Sandwitches: Our Toast – album review

May 27, 2015
We use cookies to ensure that we give you the best experience on our website. If you continue to use this site we will assume that you are happy with it.Ok