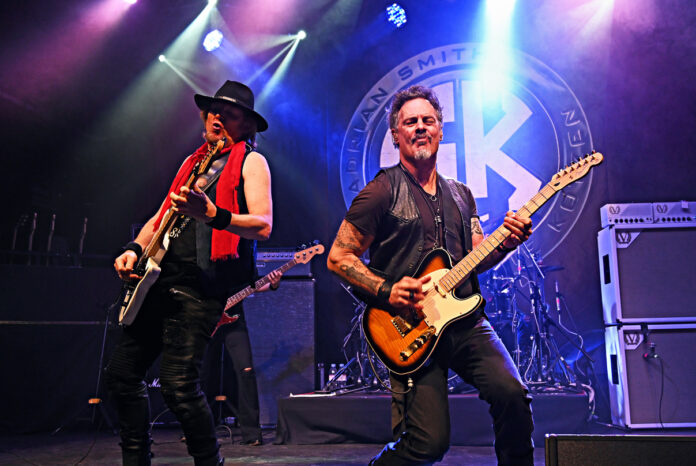 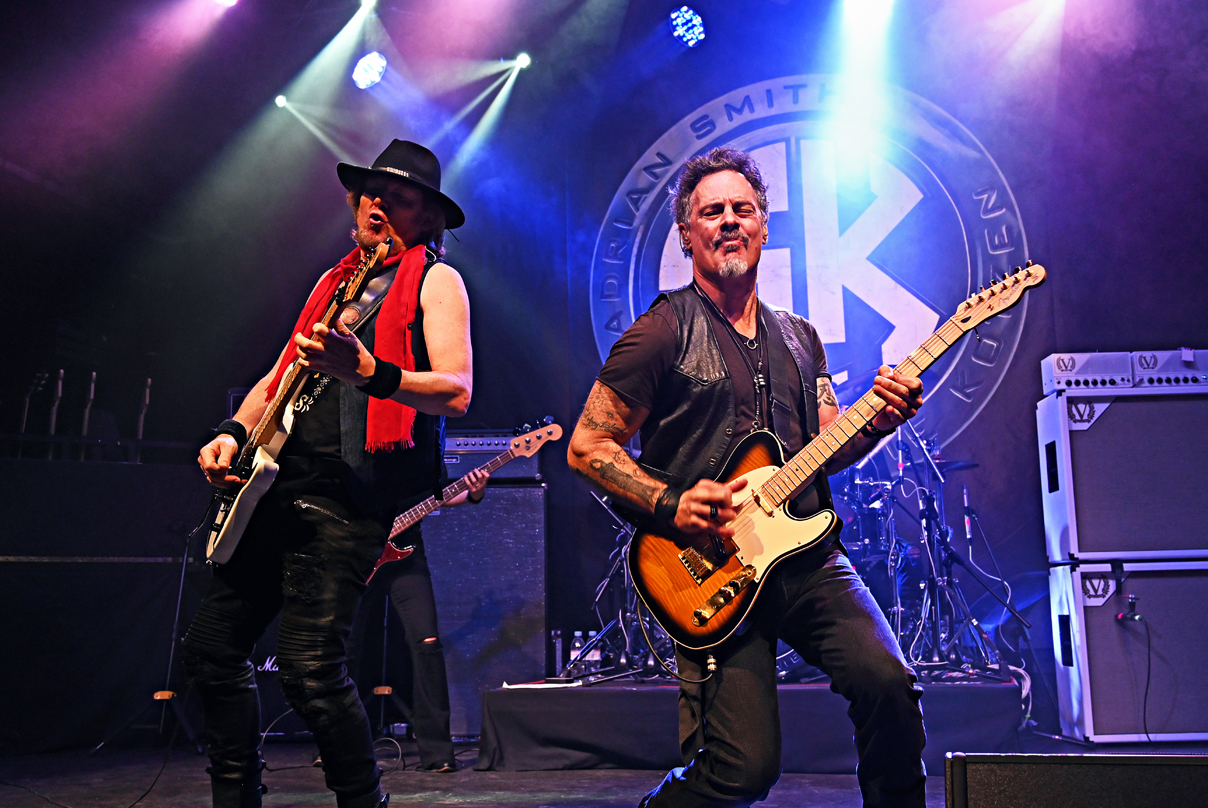 For the uninitiated Smith/Kotzen are Los Angeles neighbours and mates who first came together for a pre-lockdown project as a break from their day jobs. That project grew into an album and now a low key tour. Richie Kotzen is an American singer and guitarist. Previously a member of Poison and Mr Big, he now fronts power rock trio, Winery Dogs. Adrian Smith is a guitarist in Iron Maiden.

Tonight I’m in the unusual position of having a photo pass for a gig where there’s no pit access for photographers. I’ve got to take my chances among the regular punters if I want any images. So 7pm sees me queueing amid the masses of Iron Maiden T-shirts with the aim of securing a spot at the barrier to shoot the bands. 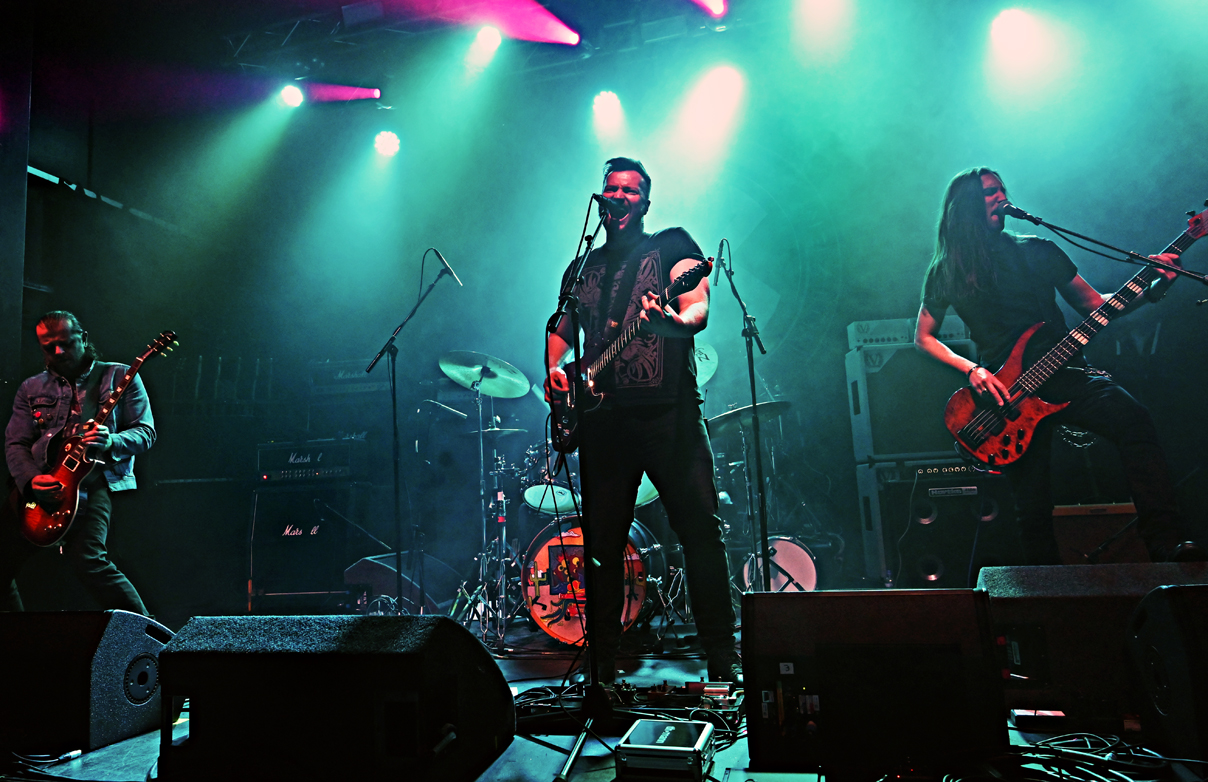 First up tonight are The Dust Coda. They’re new to me, and to my new found friends sharing space on the front of the stage barrier. They’re in the classic rock mould but with a modern touch. There’s nothing really original here, but the vocalist has stage presence and they go down well. In fact, they just seem to be getting into their stride when after 25 minutes they’re told they have just one number left.

As the stage darkens to the accompaniment of classical music Smith/Kotzen greet the crowd and launch into Taking My Chances. It sets a template for what’s to come. Opening with grungy riffs, the vocals soon kick in and there’s an immediate interplay between Smith’s rougher voice and Kotzen’s more melodic tones. Yet inevitably, as the song develops it’s their guitars that dominate. 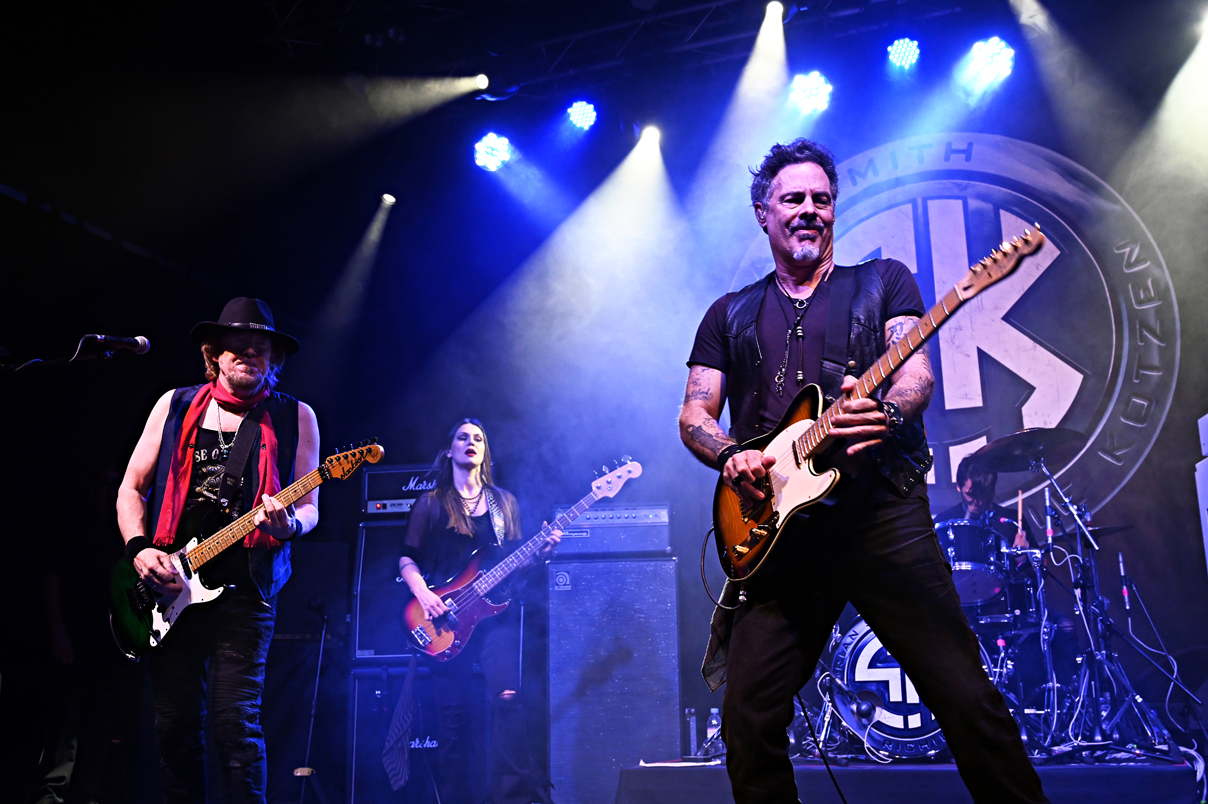 Better days begins more slowly. It’s a blues-tinged track propelled by a really interesting bassline that steadily builds as the dual guitars carry us toward the song’s climax. Without pause, we’re into Some People. Opening with an almost Zepplinesque guitar riff, it develops into a mid-paced rocker with a slightly funky feel. Adrian Smith’s vocals take a while to reach the chorus, but once in your head it’s one of those melodies that just won’t leave. With no time to catch our breath, we’re on to Glory Road. It’s slower and bluesy with echoes of Bad Company in places. Adrian takes lead vocal duties again with Richie adding harmony the chorus. It’s been a barnstorming start generating a great audience response, but now it’s time for a pleasant diversion. The barrier front of stage is festooned with Happy Birthday banners. It’s Adrian Smith’s 65th birthday, but he’s being a little bashful about acknowledging it or being sung to. Richie Kotzen has no such reticence though as he proudly proclaims that he’s also celebrating today. It’s his 5th Wedding Anniversary. So where’s his wife, Julia Lage? Well, she’s there on stage behind him playing bass in the band. 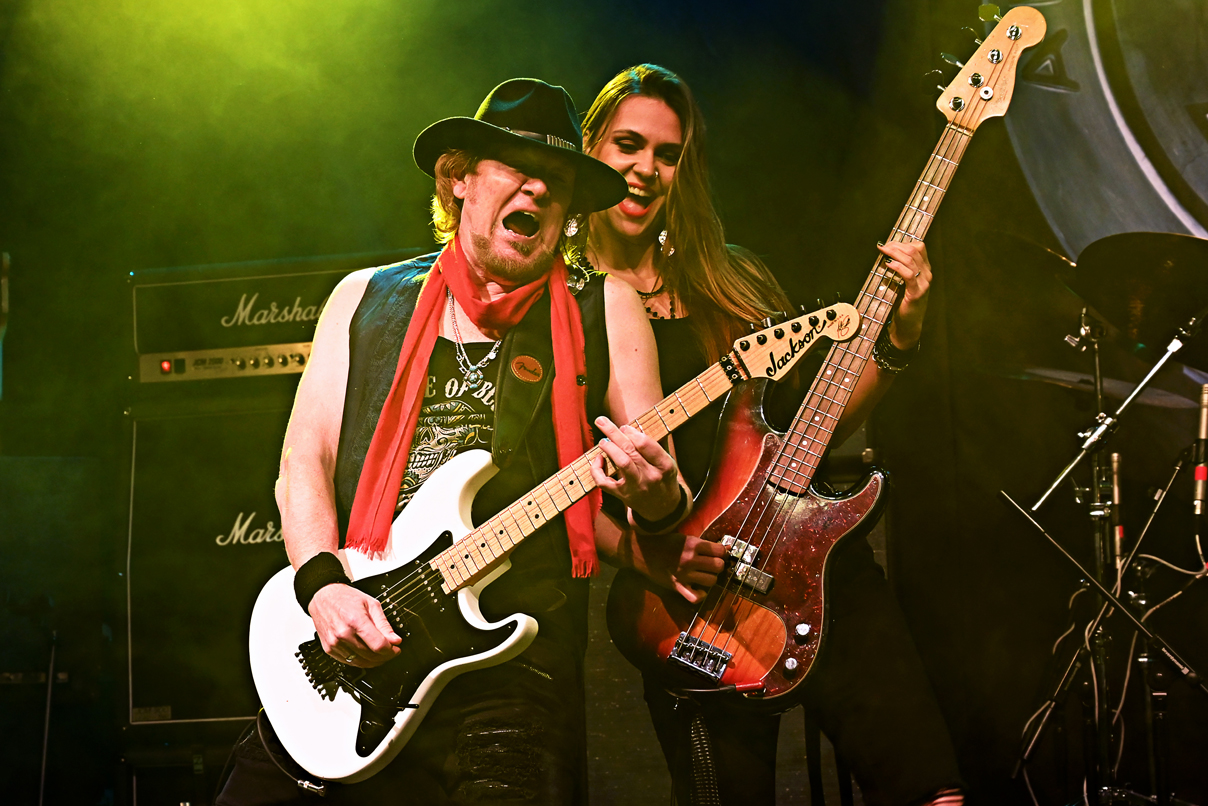 As the sustained good wishes and applause die down the band break into You don’t Know Me. Downbeat from the start, it’s a classic slow-burning, blues-infused rock ballad, with Richie and Adrian trading first vocals and then guitar breaks. It wouldn’t be out of place on one of Gary Moore’s 1990’s blues-themed albums. They continue with Hate And Love. It’s one of the few songs that doesn’t work for me, but they’re soon back on track with I Wanna Stay’s tale of unrequited love; another tasteful bluesy ballad.

Til Tomorrow somehow reminds me of Blue Oyster Cult’s, Then Came The Last Days Of May, evoking memories from my distant past. I was lucky enough to witness their first UK show at Hammersmith Odeon in 1975. The quite epic Scars follows. It’s a track that simply builds and builds and builds. For me it’s the highlight of the set, but we’re not done yet.

The band decide to inject some pace and Got A Hold On Me gets the audience heads shaking and feet moving with both men launching into some guitar pyrotechnics. Rise Again maintains the momentum with Richie even finding time to inject a few licks of jazz-rock guitar. Solar Fire finally brings the set to a close. It’s got the feel of classic 1970’s American rock with Smith and Kozten sharing vocals as the song fittingly builds toward a guitar-driven crescendo. 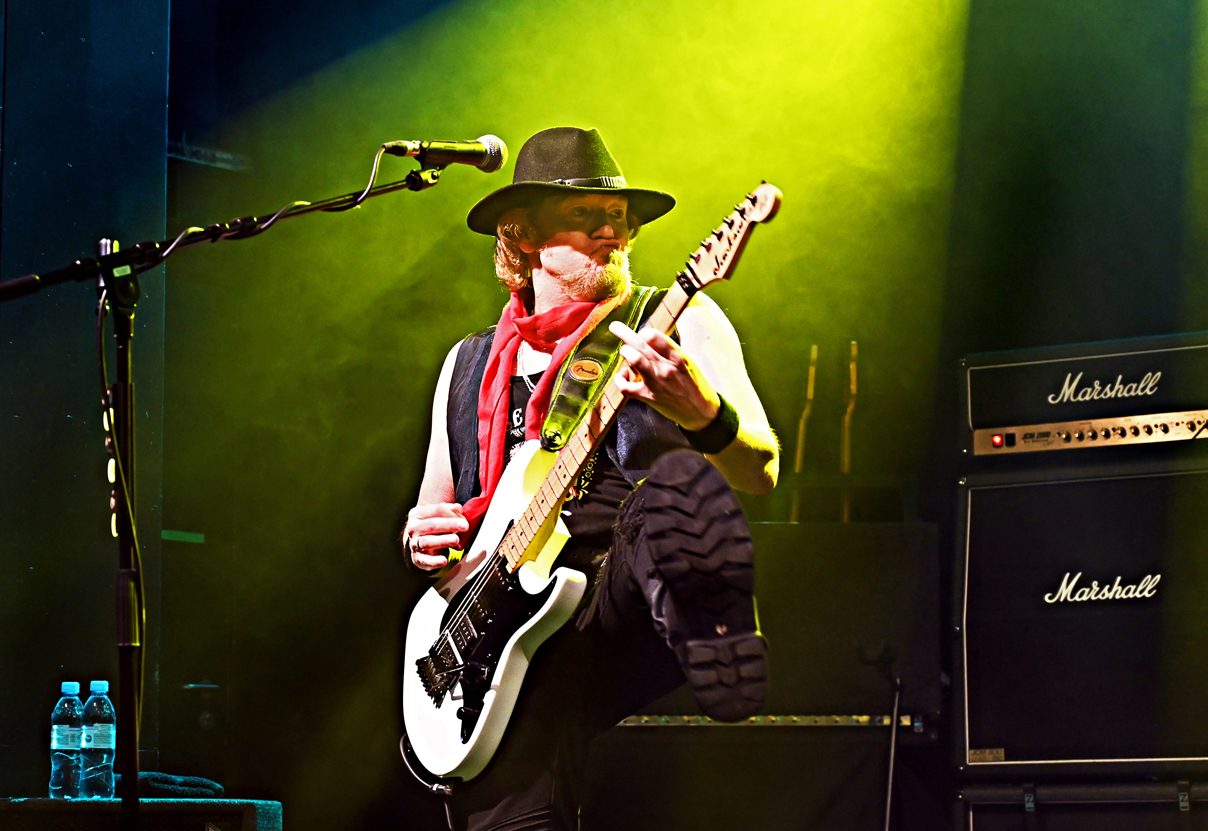 In the brief pause before an encore, I can’t help reflecting on just how good the band are musically. Smith/Kozen isn’t an overtly flash band, but they’re an incredibly tight unit, where music just seems to flow through naturally. They’re all seasoned musicians but it’s astonishing to think that tonight is only their 6th gig together.

Returning to the stage they open with You Can’t Save Me; a Richie Kotzen song performed with some impassioned vocals. It’s another track that builds and builds and for me an unknown and unexpected delight. As the first notes of Wasted Years boom out from the stage the crowd roar with approval. Every hand in the room seems to be raised; those punching the air with their fists competing with hundreds of phone cameras, held aloft capturing the moment. This is what the masses of Iron Maiden fans have been waiting for! It’s one of those occasions where an already heady atmosphere erupts and takes everything to another level. 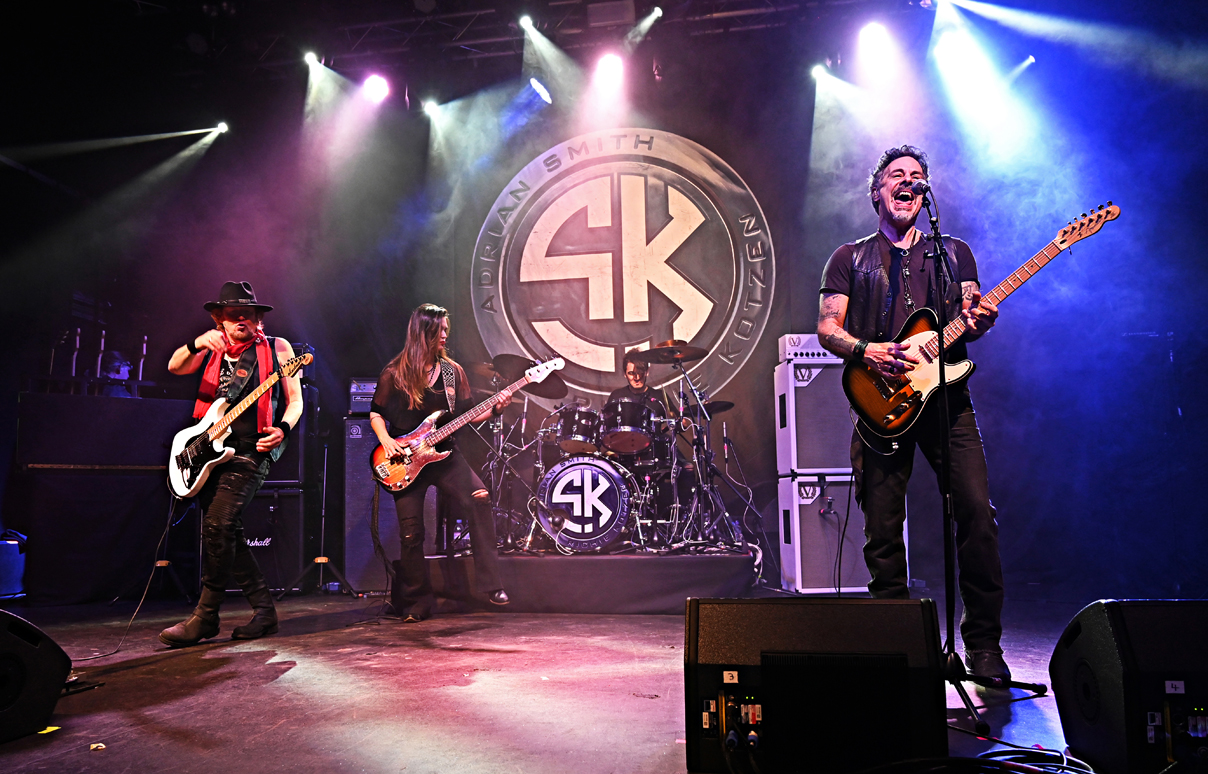 Before the crowd can settle we’re into the final number, Running. It’s the first song that Smith/Kozen wrote together, but more significantly, it gallops at a similar pace to Wasted Years, ensuring the euphoric atmosphere isn’t lost. When the applause eventually dies down both men thank us for being a great audience. They’re accustomed to playing to vast crowds with their regular bands, yet I get a sense that they’ve really enjoyed playing their own material and their appreciation is genuine. Before leaving they tease us with the prospect of another Smith/Kotzen album and a promise to return. I for sure will be there to see them again.

At its heart, tonight has been a homage to the sounds that inspired our protagonists in their youth and young manhood. Yet they’ve done more than merely regurgitate of the past. In their songs, Smith/Kotzen have given us personal interpretations of the blues-rock genre and combined these with C21 sensibilities and sounds. What’s more, tonight’s performance has delivered their vision with style, musical dexterity and no shortage of passion.