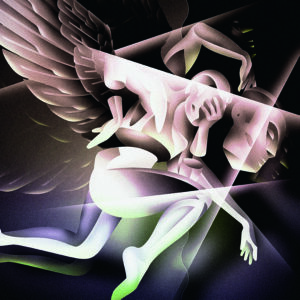 Released on Billy Corgan’s very own Martha’s Music label, Shiny And Oh So Bright, Vol 1/LP: No Past. No Future. No Sun. is the first album in over 18 years to see the band’s frontman teamed up with fellow founding members James Iha & Jimmy Chamberlin. Recorded at Shangri La Studios with legendary producer Rick Rubin at the helm, this tenth studio offering from The Smashing Pumpkins displays a well-honed and dynamically rich sound.

Featuring a melodic sensibility and feel that makes one safely assume that Corgan favours Champagne from the Supernova region, Knights of Malta is an epic opener to this eight-song album. Featuring Harrison-meets-Hendrix-inspired backwards guitar solos, soulful female backing vocals and a recurring violin-infused riff – this is not your typical Smashing Pumpkins track. But, then again, The Smashing Pumpkins are not your typical band. And nor should they be. Although it would have benefited from being streamlined by a minute or so, Knights of Malta is a well-crafted medium tempo number with catchy multi-layered hooks.

The same can also be said of Silvery Sometimes (Ghosts). Although this first single from the album is undoubtedly more typical of the band’s sound, there’s a restraint in the overall delivery that puts the melody at centre stage rather than the character of the individual members. While Corgan would famously agonise over guitar sounds in studio and the sonic signature of the group in the early days of the band, I sense that the Chicago-born musician prefers to focus his attention more on the art of song writing these days. As a result, what some listeners may deem as being safe is the simply the result of divergent interests.

Falling into the ‘safe’ category as well is Travels. With its prominent staccato piano and muted pedalled bass, this track wouldn’t be out of place on a Coldplay album. That’s not to do the song a disservice. In fact, there’s an effective juxtaposition between lyrical content and delivery here. The repeated and infectious “It’s where I belong” hook sounds positive and jubilant until the “far from here” tail reveals otherwise. It’s a catchy ditty with a chorus that Sheryl Crow would be envious of. And, while Chamberlin’s deftly played tom toms are the foundation of the track, they feel like they could have been looped up in ProTools in that the variety of his drum patterns are surprisingly static. While undoubtedly playing for the good of the song, it’s just a little bit more understated than I would have liked. Chamberlin Lite, in other words. 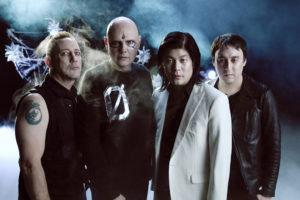 With Solara, however, the drums are anything but light. This heavier tune is awash with chunky guitars that Grammy Award-winning producer Bob Rock would raise an eyebrow over and prominent drums that drive the arrangement. Dramatic in quasi-Muse fashion at times, this frenzy of riffs feels like The Smashing Pumpkins of old and showcases the unique chemistry between the founding members alongside long-time guitarist Jeff Schroeder.

The pace and aural density is brought down with Alienation. This piano and synth pad-charged track is mostly sparse but the listener is rewarded with some impressive builds – especially in the guitar solos. While it presents itself as the least immediate song on the album, there’s no denying that the song breathes and possesses varied dynamics. This could be a possible grower.

Heaviness returns with Marchin’ On. Chamberlin was clearly allowed full reign to ‘have at it’ on the drum front and he sounds positively unhinged at times. It’s a perfect foundation for Corgan’s sinister vocals with his recurring ‘body and soul’ vocal part providing an instant ear worm. It’s bombastic, memorable and prompts instantaneous air guitar playing. 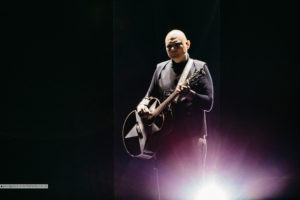 This rollercoaster of an album returns to a more serene pace with the sumptuous With Sympathy. Restraint from the band successfully paves the way for Corgan to deliver a confident and impressive higher register vocal delivery. It’s tuneful, delicate and wouldn’t be out of place as a television theme song for a dark and edgy concern on Netflix.

Seek And You Shall Destroy closes the proceedings with powerful urgency. It merges emotive stab-laden bridges with an anthemic ‘snare on every beat’ chorus that wouldn’t be alien in the world of SoCal Pop Punk. I’m not suggesting that the band are deliberately treading on the toes of Bad Religion. They’re not. But the rich stylistic blend of Seek And You Shall Destroy contains many seemingly disparate elements in its DNA of which tight and catchy punk is merely one part.

It’s great to have this lineup of Smashing Pumpkins back and, while I wish the chemistry of band was more apparent in the arrangements, Corgan’s song writing continues to be an outstanding force. As this reunion took place in tandem with the recording of the album, it’s not surprising that production has sided with a safer approach. Rick Rubin has successfully captured the essence of the songs and the overall sound is modern and tight if a little lacking in character at times. Had logistics allowed for this version of The Smashing Pumpkins to record Shiny And Oh So Bright after their highly successful world tour, I am confident that more of the group’s magical chemistry would be on display here. I have a feeling that the follow-up to this will much more powerful and characterful.