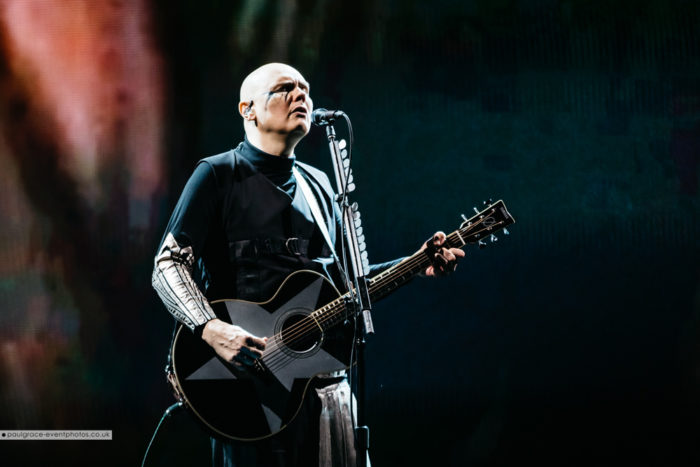 It’s been 20 years since Billy Corgan, Jimmy Chamberlin and James Iha have collectively toured as Smashing Pumpkins. And, as a fitting tribute to their arrival back on our shores, Louder Than War’s Andy Duke examines their triumphant return to London in just as many points.

3. 4 covers were performed in total. They also took on David Bowie’s ‘Space Oddity’, with Corgan (dressed up inexplicably like Darth Maul), Betty Noye’s Baby Mine and Led Zeppelin’s Stairway to Heaven.

4. This last song, which was deemed inappropriate to play in a music shop in the film Wayne’s World, saw Corgan reprising Robert Plant’s hilariously cringe-worthy “does anybody remember laughter?” line from Led Zepplin’s 1976 concert film The Song Remains The Same. Only about a quarter of the audience got the reference but those that did would have undoubtedly felt proud of themselves. And the Chicago-born singer appreciated the reaction judging from his cheeky grin after delivering the line.

5. Mark McGrath provided video interlude messages throughout the set. Adopting a surreal Vaudevillian guise, this is the most impressive acting the Sugar Ray singer has done since Sharknado 2.

6. On bass guitar was Jack Bates who is the son of Peter Hook of Joy Division and New Order fame. The English musician shares his father’s early love of Yamaha basses and is an exceedingly dynamic player and a welcome addition to Smashing Pumpkins’ touring lineup. 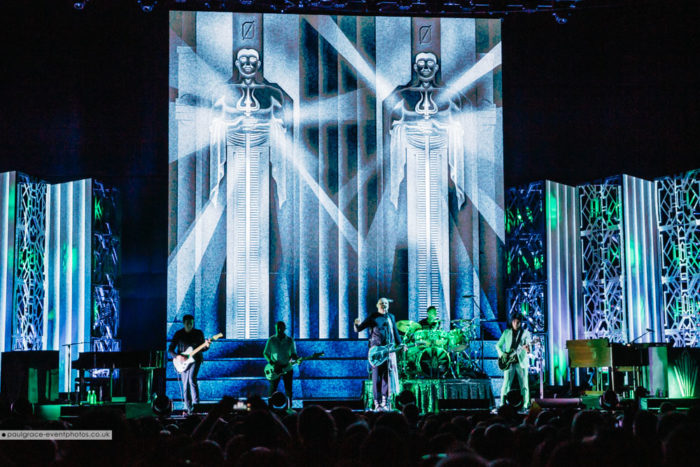 7. Not on bass guitar was D’arcy Wretzky. While there’s been a great deal of press coverage about the ‘full reunion’ that didn’t happen and the reasons why, it was surprising to see her omitted from the many pre-2000 music videos that were projected behind the band.

8. On lead vocals was James Iha, for a few songs that is, alongside tight vocal harmonies from the Australian-born keyboardist Katie Cole.

9. The guitarist who originally replaced Iha, Jeff Schroeder, is still in the fold and the onstage dynamic was jovial. There even appeared to be a couple of in-jokes onstage about guitar straps between the two guitarists. Going the ‘Iron Maiden Route’ by expanding the lineup rather than dismissing a newer recruit in favour of an original member has worked surprisingly well for both bands.

10. Corgan’s guitar playing has never sounded better. Brandishing a 70s Fender Strat for his more adventurous plank-spanking, there’s a delivery in his attack that recalls Alex Lifeson from Rush with added Big Muff-infused overdrive thrown into the mix. From a tonality viewpoint, Corgan clearly also has a big love for Van Halen’s infamous ‘brown sound’. This isn’t surprising considering that tracks from the Californian band’s Women & Children First album were being piped through the PA just prior to Smashing Pumpkins hit the stage. But, to my ears at least, the adoration for Canada’s most famous power trio goes much deeper and revealed itself especially in Corgan and Chamberlin’s interplay while going off-piste during song outros.

11. Corgan knows how to wear a skirt.

12. Iha is adept at onstage banter. Looking resplendent in his Saturday Night Fever-style white suit with black shirt, the guitarist has an endearingly dry sense of humour which helped to lighten the mood during what was a highly entertaining yet intense set.

13. Extreme dynamics. Smashing Pumpkins are masters at utilising juxtaposition as a method and they make this work to their advantage live both sonically and visually. From the quietest of ballads to aural overload that made one consider whether the ‘brown note’ had finally been unearthed (which is different from the aforementioned ‘brown sound’), it’s not surprising that black and white were the theme for the whole group’s onstage attire. 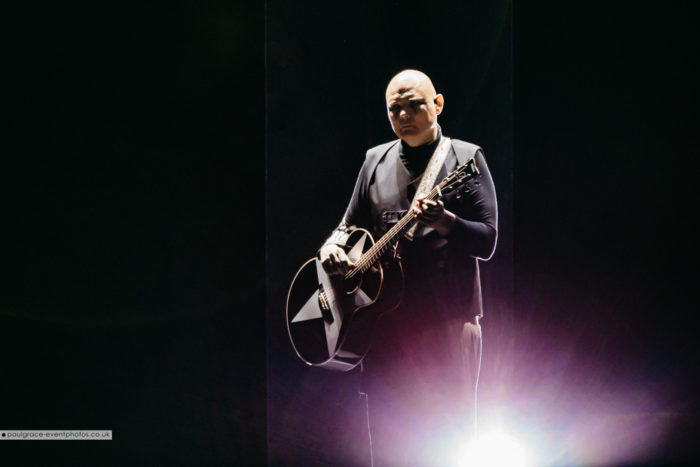 14. Theatricality aplenty. Corgan used ALL of the stage to perform from. Be it singing TO the projection screen during the Space Oddity cover (the footage was fittingly galaxy-themed) or playing keyboards high above the band while donning a hood like a medieval overlord.

15. Sans guitar. Avec microphone. Thanks to having not one but TWO additional guitarists, the band’s frontman was occasionally able to put his six-string to the side and just use the microphone to perform. It added another element to the group’s live show and enabled the Corgan to engage with the audience more intimately.

16. Audience Replenishment. While a large proportion of the crowd had clearly followed the band since the 1990s, it was refreshing to see that at least a quarter of the attendees were comparatively new recruits who were probably not even born when Mellon Collie and the Infinite Sadness was originally released in 1995. Talent will out regardless of what era you may call your own.

17. A Whole Lotta Love(ly) Guitars. Perhaps it’s a Chicago thing but the one thing that Smashing Pumpkins shares with fellow Windy City rockers Cheap Trick is an affinity for changing guitars and basses throughout the set. Does it make a sonic difference? Yes. Corgan is extremely fussy about how each song should sound. As a result, if you witness Iha bashing out some arpeggios on a Rickenbacker for only one song during the set – it’s not because of the guitar’s good looks. Well, maybe just a little bit.

18. Smiles, everybody. Smiles. Corgan, at 51, has few laughter lines. There’s a reason for this. But, judging from his cheerful glances to bandmates and the audience throughout the performance – he had better invest in a good moisturiser. It’s wonderful to see Corgan looking so happy.

19. Reunions often feel like an excuse to make hay. And, while there’s no doubting the lucrative nature of this tour for Smashing Pumpkins, there appears to be a genuine sense of joy in the band. And a revitalised passion. With newly released material expected next month, it be will interesting to see if the strength and obvious musical bonds of the touring lineup make it onto the new record. Apart from Rick Rubin’s involvement as producer, not much is known about who will be appearing on the forthcoming release entitled Shiny and Oh So Bright, Vol. 1/LP: No Past. No Future. No Sun.

20. Twenty Stories High. That’s how tall Smashing Pumpkins’ stage backdrop was. Resembling the doors of an aircraft hangar, this imposing flat surface also doubled as a projection screen and was divided and manipulated throughout the gig. At some points, it appeared as though two cinema screens were courting each other during the gig from opposite sides of the stage. And, at any given time, these flat surfaces would flip and reveal cleverly arranged lighting rigs beneath time. For some parts of the gig, the stage resembled The Death Star. Yet, after a few quickly executed tweaks, it was stark and barren. The video imagery, some of it bespoke for the performance, was also as captivating as the band were live.