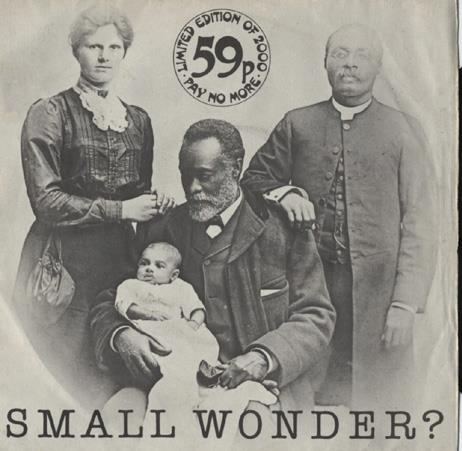 Small Wonder was arguably one of the most interesting independent punk record labels in the UK from 1977 to 1983.  It put out records by a strange and diverse selection of amazing, influential artists from Crass to Patrik FitzGerald, Cockney Rejects to the Cure and Bauhaus.  In between were less well-known names like the Cravats and Punishment of Luxury, the Proles and Anthrax.  To celebrate a forthcoming event in July in Middlesbrough here is a personal Top Ten Small Wonders. (No Crass, Rejects or Bauhaus as you all know them and their work surely!)

Puncture ‘You Can’t Rock and Roll’

The Cure ‘Killing an Arab’

Anthrax (UK) ‘They’ve Got It All Wrong’

A great interview about the history of Small Wonder with its founder Pete Stennett can be found here.

Advance Tickets £11 – On The Door £15 and can be purchased here. Further details are available on the Facebook Event Page.

The mighty Punishment Of Luxury headline a special gig dedicated to Pete Stennett who ran Small Wonder in Walthamstow, London, and released records by quite a few north east bands. Punilux, Murder the Disturbed, and The Proles will be joined by jazz punk aficionados The Cravats, a solo performance from Pete Fender of the Fatal Microbes and Anthrax UK. Somewhere in there Keith Newman will interview some of those involved and how they came to have records released on the label. It promises to be a special evening indeed.

This will be Punishment of Luxury’s first appearance in Middlesbrough since 1980 though they have played two gigs in Stockton to enthusiastic audiences. The Cravats have also played in Stockton but to our knowledge never played in Boro. It’s time to put the record straight.

Pete Fender was an original member of the Fatal Microbes and is the son of Vi Subversa of The Poison Girls and he will be travelling up from Brighton with Anthrax UK. Closer to home Murder The Disturbed originated from Washington, Tyne & Wear whilst The Proles came from Fencehouses, County Durham.

All words Ged Babey except gig details which are taken from the Facebook event page.