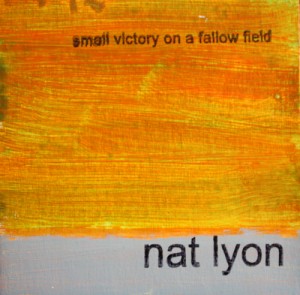 The third album from Nat Lyon is an instinctive and uncompromising example of in-the-moment music. Steve Swift is enthralled.

A brief history. I first came across Nat Lyon maybe three or four years ago when we got chatting on Twitter about our mutual love of David Bowie. Like me, he also loves British punk from the halcyon days of 1976-78 and a few other things besides. At some point in these early conversations he sent me a couple of his own demos which left an immediate impression. The radical soundscapes intrigued and I could tell there was something – what’s the word – intelligent – going on. These early sketches developed into a couple of self-released albums which I loved for their uncompromising imperfections and personality. Somehow, he’d channelled the arrogance of Bowie and the ‘couldn’t give a shit’ spirit of punk rock into two highly personal musical statements.

His reference points were his surroundings, the people in his life and a jaundiced world view which, despite the hangdog delivery,  didn’t dilute the relentlessly optimistic message of keep going, just keep going. He describes his music as “punk folk,” a narrow genre indeed, but a term that accurately captures his aggressive lo-fi approach to making music.

Third album Small Victory On A Fallow Field is an altogether looser affair than its predecessor New England Paradigm Shift (2013), as if Lyon has heeded his own advice. Domestic sounds intrude (it was largely recorded in his Connecticut house) and there’s a playful approach to the music which, unlike his previous work, doesn’t adhere to conventional song writing structures. Doors slamming and dogs barking inject an intimacy that he takes occasional pleasure in destroying – the album is a lighthearted snapshot of the wrinkles and mood-swings of a man making music, no pretensions here.

After reviewing the first two albums, believe me when I say that finding the words for Nat Lyon’s music isn’t easy. Like the best writers, he deals in grey areas and it’s not my job (or desire) to turn these black or white. Whether this music grabs you or not will largely depend on your patience and the instinctive connection that only happens when something – anything – bypasses the head to the heart.

Maybe listen to the track below. The reedy voice (a compliment) rattles around an opulent arrangement of synths and acoustic guitars. The megaphone-like echo could be a voice of authority or Lyon’s alter ego. The words seem to be concerned with inadequacy and humility and repeat as if the simple act of repetition will give them meaning. It doesn’t matter, I’m free to speculate and apply my own interpretation. The song ends in a mosquito hiss. Like the most powerful art, it’s just a few minutes of what’s important to the artist at that time and I either connect or I don’t. As it happens, I do.

The range of styles and song writing across the 15 tracks is impressive. Lyon’s punk leanings surface more than once with very pleasing fuzz and distortion. But there are spaces, as if the clouds have just parted.

Ashford To Eastford is a mordant interlude with a characteristic circular drum pattern whereas Every Bad Day is an easy listening rant :

this is a test, a cultural experiment
to see if it’s humanly possible
to write a pretty song
about a subject that is so ugly
that no song should ever be written about
it’s just a story

There’s a real brain at work here, but he’s having fun. He’s not asking me to like him, just to identify with his honesty – that I get such a forensic insight into his mind, his surroundings and his motivations is a rare achievement. He’s remained true to himself and found a highly original vehicle for his thoughts and feelings.

Nat’s heart and soul hasn’t just been poured into the music and lyrics. He’s produced 100 beautifully painted CD jackets (I know because I have No.1) and is releasing some free alternate mixes on his Bandcamp. The album itself was produced and assembled in various U.S. and European locations and is a real labour of love to be quickly followed, it seems, by other albums.

So, in the years I’ve known Mr. Lyon (although we’ve never met) I’ve felt honoured to be able to share in his music. Anyone can get to know him (and his dogs, the creaking floorboards…) All you have to do is listen to this highly personal, yet universal record.

Buy the album and access the downloads of alternate mixes from Nat Lyon’s Bandcamp.

All words by Steve Swift, find him on Twitter. More writing by Steve on Louder Than War can be found at his author’s archive.