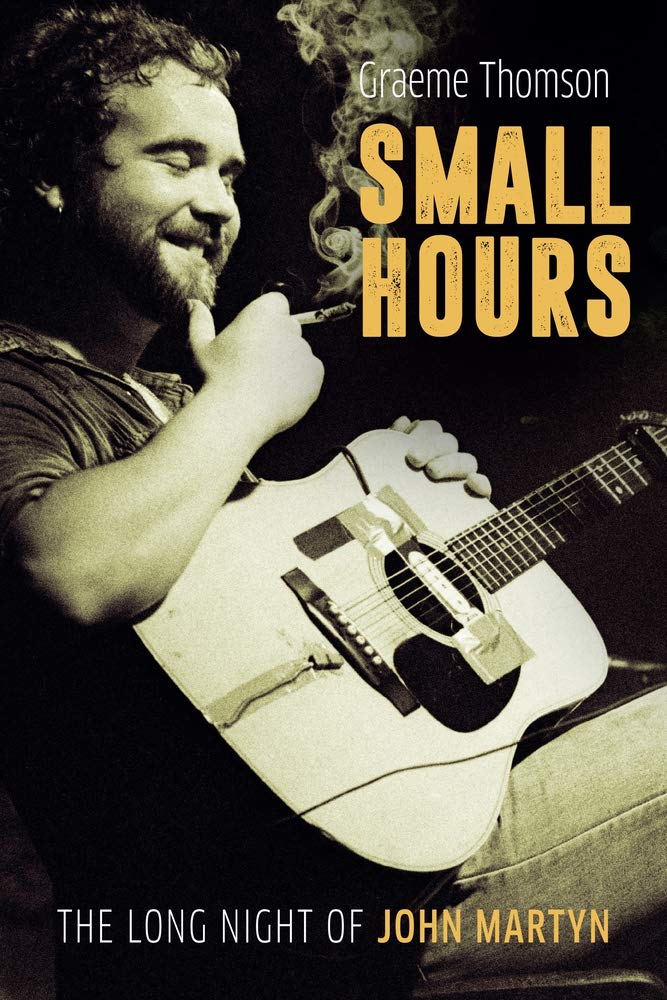 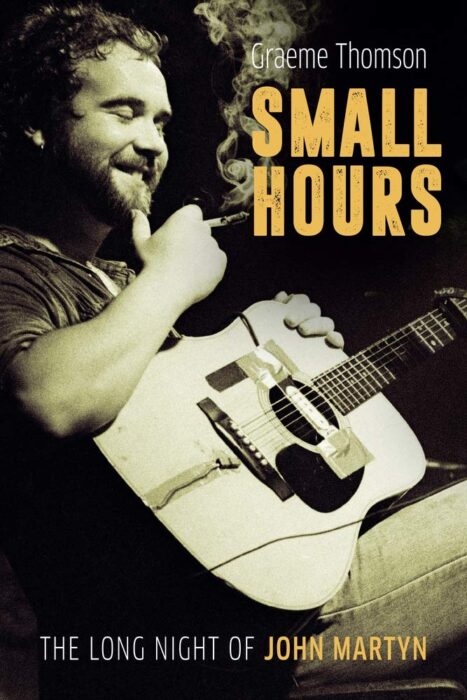 Graeme Thomson’s biography Small Hours: The Long Night Of John Martyn gives compelling insight into the complexities of the man and his music. Friends, colleagues and family are often wholly emphatic in their admiration of Martyn’s talent and the lasting impression he made. His confounding abilities present as a double-edged sword facilitating destructive behaviours in his personal life that haunt this biography.

In the prologue to Small Hours The Long Night Of John Martyn, Thomson imagines the film of Martyn’s life ‘that will never be made’.  He gives focus to Martyn at the height of his powers in the early ‘70s, a rising Island Records star. Panning back to reality Thomson describes meeting the diminished elder Martyn in 2005 in a beer garden in Ireland. His fall is nothing short of Shakespearian although the author recalls ‘He seemed cheerfully unrepentant about the choices he had made’.

Part One: The Winding Boy gives an account of the young Ian McGeachy who would become John Martyn. His mother’s absence from the age of two and the shadow of his father’s alcoholism impact on Ian’s troubled soul. Yet he appears to have a largely happy youth and genuine first love with his childhood sweetheart. This early history includes forays into Glasgow’s folk music scene; Ian distinguishes himself as a talented guitarist with ‘an interesting finger style’ (Rab Noakes). Despite cultivating a Glaswegian hard man image in later years, John Martyn cuts a dashing figure as a six-foot-tall teenager with cherubic curls and prodigious talent, who walks around in long fur coats and no socks.

Thomson charts Martyn’s career trajectory from the ‘60s alongside contemporaries such as Bert Jansch, Davy Graham, Sandy Denny and Nick Drake (to whom he would later dedicate Solid Air.) At Les Cousins in Soho, he impresses as a talented guitarist with vocal dexterity and ‘musical intelligence’ (Richard Thomson). Christy Moore is quoted, describing Martyn’s rise on the folk scene as ‘meteoric ‘.

One of the darkest shadows across proceedings is cast by the experiences of his first wife Beverley Kutner. A talented artist in her own right, some might consider that Martyn eclipsed her career. Although they initially work together, plans for Beverley to tour and record in America as a solo artist become side-lined; he grows ever more successful while she stays home with children. There’s a compelling account of the couple meeting Bob Dylan who seems more drawn to Beverley; the subsequent consequences of Martyn’s jealousy reveal the beginnings of an abusive dynamic.

Already developing an interest in alternative tunings, sound experimentation and jazz, Martyn rolls into the ‘70s via two collaborative albums with Beverley before going on to consolidate a solo career. Despite several demoralising experiences in America as support act to Yes and Eric Clapton encountering largely dismissive audiences, his style and reputation flourish. Maintaining a love of Echoplex and other technologies, Martyn gravitates towards electric guitar with a continuing insatiable appetite for experimentation.

His collaborations range from Lee “Scratch” Perry (One World), to a more commercial route in the ‘80s when he works with Phil Collins. (Grace and Danger and Glorious Fool). Collins recalls bonding through music, a shared love of drinking and mutual wallowing in heartache over their respective divorces. The account of late night drunken abusive phone calls to their ex-wives ‘to vent at them’ doesn’t wear too well.

An impending sense of anxiety grows alongside career success and ever-escalating personal chaos. Conflict, addiction and personal strife hover everywhere but Thomson is careful to give an authentic account. He allows those who knew Martyn to be the judge and jury on the impact he made personally and professionally. There is a degree of reconciliation with some of his children later in life, particularly his daughter. But Thomson gives a wounding account of Martyn’s response when his estranged teenage son by girlfriend Gillian Allen wished to meet his father: ‘Tell him I’m dead’. The self-fulfilling prophecy of rejection and addiction had played out into the next generation.

Part Two: Rolling Home describes later albums, tours and wider commercial success of subsequent decades. Thomson gives a distinct sense that the formative years of Martyn’s life are concluded. The locomotion of the music industry drives him where previously there had been an inner direction. By the new millennium, Martyn finds himself working again on a more independent basis. Despite losing the lower part of his right leg in 2003, largely confined to a wheelchair, he rallies to record penultimate album On The Cobbles.  Tracks feature appearances from various artists including Paul Weller. Martyn continues to tour, scaling up to bigger venues with material from his back catalogue.

Thomson reflects that Martyn’s declining health curbed his wilder tendencies drawing him somewhat into the fold of respectability.  He received a lifetime achievement award from the BBC Folk Awards in 2008. There is a final irony in his pleasure at receiving an OBE. This proved to be a catalyst for cleaning up his act in anticipation of receiving the accolade. Sadly for Martyn, he died of pneumonia and kidney failure in January 2009 before the ceremony took place.

Ian McGeachy the boy who became John Martyn dominates the pages of Thomson’s biography with a larger than life appetite for music and indulgences; a character unable to forgive misdemeanours in others although always keen to be forgiven himself. There is an inevitable tragic progression from sweet-faced youth into complex, aggressive, prodigiously talented, powerful man. Although he died young at sixty, he’d achieved more than forty years as an artist, producing a vast catalogue of work and his body had survived an extraordinary battering. Martyn undoubtedly showed his best self through music, loved his friends dearly and yet rampaged through the lives of those close to him seemingly without self-reflection.

Graeme Thomson imagines the film that will never be made about John Martyn, on the other hand one doesn’t know for sure.