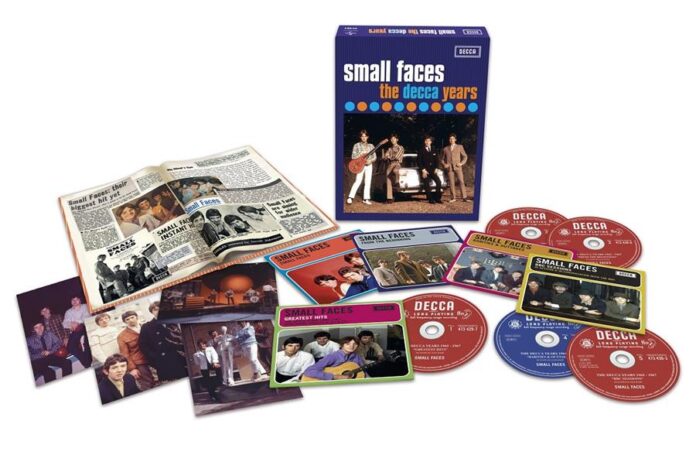 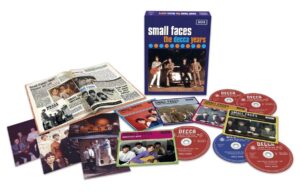 Louder Than War’s Joe Whyte reviews a five disc, gorgeously packaged boxset of the early years of the real Modfathers.

Featuring B-sides, outtakes, radio sessions and TV appearances, “The Decca Years” is an all-encompassing overview of the developing talent and precocious songwriting of Steve Marriot’s band of youngsters. With perhaps the greatest white-soul voice that ever emanated from these isles, Marriot was the leader of a band that dominated the charts and the British music scene for several years. The legacy of The Small Faces is written large across mod(ern) music; Weller, Blur et al owe Marriot a huge debt of gratitude and listening to some of the songs on this collection, it’s fairly obvious that Jimmy Page and cohorts in Led Zep were paying close attention to the virtuosity on display, too.

The first disc is a fairly standard run-through of the greatest hits with their attendant B-sides. Of the 21 tracks, there’s barely a duff one amongst them and it’s quite an eye-opener to think of this band of virtual teenagers being able to rattle off material of this standard over such a short period of time. A couple of the songs are included in their mono original incarnations and certainly stand the test of time.

Disc two is the debut album (Small Faces) with the mono version of single “Sha La La La Lee” tacked on to the end. The opener, “Shake” sets the tone with it’s Muscle Shoals-summoning groove and Marriot’s aching vocal. Being a big Sex Pistols fan, I was interested in the comparison between the very-early mod-ish Pistols (who were all huge Small Faces fans and covered “Understanding” and “What’Cha Gonna Do About It”) and the original versions. Obviously, the youthful Pistols weren’t able to match the musicianship here but it’s interesting to hear the similarity between Ronnie Lane and Glen Matlock’s bass playing. Similar sound, too.

Disc three is Decca gather-up album “From The Beginning” and includes the original mono single version of Del Shannon’s “Runaway”. This record sees the first appearance of “All Or Nothing” on an album, too.

Rarities And Outtakes is the fourth disc and contains 23 alternate and vocal-free versions of many of the previously released songs.  Again, the standard of musicianship on show is quite remarkable and the band sound like they could swiftly U-turn from straight ahead soul shuffling to wigged-out psych on a whim.  “My Mind’s Eye” is a classic example.

The final disc is made up of a number of BBC sessions and these are preceded by several interviews by starchy Auntie Beeb types with Marriot. The language often seems to be from a distant planet in this 21st century but brought a wry smile at times. The songs that are culled from the Joe Loss TV show are slightly rough in sound quality but the others are as pristine as one would expect.

Many of the tracks herein were thought to be long-lost and it’s nice to see it all gathered up so beautifully. Given the short time span that the group were with Decca, there is a bit of track repetition (if not “version” repetition) but there’s much here for the casual fan and completist.