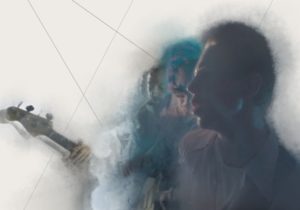 The Sly Persuaders have today released a brand new single ‘Sensational’ out via Roadkill Records.

‘Sensational’ is the new track from The Sly Persuaders and it marks the announcement of their second album ‘Saboteurs’. Following their acclaimed debut which featured an array of neo-rockabilly classics, The Sly Persuaders have honed and altered their craft into something darker, heavier and tonally sharp.

Reflecting London’s bleak political climate alongside themes of poverty, disenfranchisement and existentialism ‘Saboteurs’ paints a harsh picture of modern life with biting clarity. Drawing influence from the likes of Nation of Ulysses, Wire, Mission of Burma and Gang of Four, The Sly Persuaders have created a pre-apocalyptic concept album with layers primed for peeling back, each listen rewarding a new revelation.

Since their formation the four-piece have been paying their dues on the UK live music circuit, earning themselves a respectable following and carving out a name as one of the city’s hardest working DIY outfits.