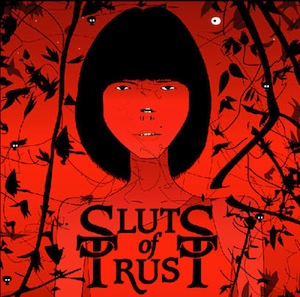 Much loved by the one and only Mr John Peel (and his listeners – they scored a top 20 slot in 2003s Festive Fifty), wildly original sleazy rockers Sluts Of Trust recently came out of what’s been a far too long sabbatical by supporting none other than massive Louder Than War favourites Gallon Drunk. For Louder Than War, Billy Walker reports. (See also this review of Gallon Drunk’s Liverpool date two days after this show).

Glaswegian music fans rejoiced last night as seminal rockers Sluts of Trust made a return to the live circuit with a short, but sweet, seven song set.

Now a three-piece, but with John Macfarlane still at the helm, the band exploded sonically with an elixir of rock, blues and psychedelia which left many in the young crowd asking… “Who are these guys?”

For the veterans present though it was more of a case of “Where have you been?” If this is their “Renaissance” then we’re bang to “Rights”.

Entering into their fourth track, the swaggering, soulful, foot tapping Seventh Seal Blues, the set takes a more laid-back and chilled out vibe, allowing us to inhale and savour the smoke of the guitar onslaught, before they impale us with Snake Hips.

With Charlie and Alistair on bass and drums respectively, floating alongside some outrageous vocal and guitar, “The Goods” are delivered.

In the aftermath it’s New Year Glory all around as the band triumphantly leave the stage.

To sum things up, this is a band you NEED to see. John Peel absolutely loved them, and in this new supercharged line up “Sluts of Trust” appear to have returned – with heavy ammunition – to invade your ears.