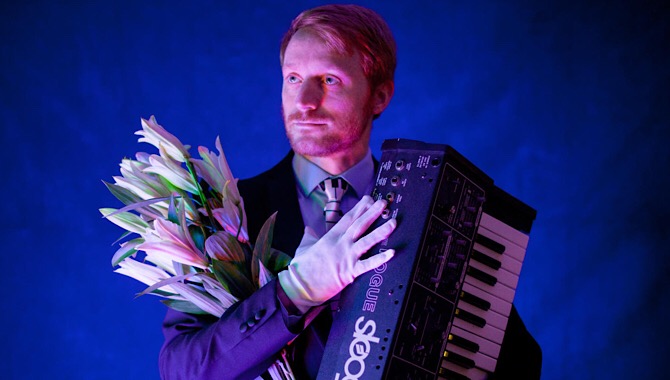 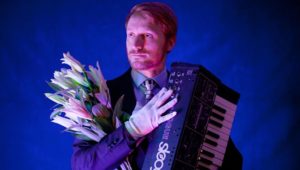 Ian Black’s SLUG took the stage with a sense of urgency, steaming through a packed set to a packed out crowd at Soup Kitchen. Onstage for approximately one hour, I kept glancing at my watch and wondering what year it was. The band’s taught funk driven sound is definite: its music that arm wrestles your attention then grabs you in a headlock, ruffling your hair and smiling like a lunatic from ear to ear.

SLUG induce the double-take on many levels. Black appears in a nun’s habit, making no reference to it whatsoever other than breaking from his deadpan expression very occasionally as a knowing mischievous smile escapes, mirrored on the faces of the basement crowd like a subterranean Mexican wave.

The rest of the band are unified in their barber shop red and white striped jackets and straw boaters, the natural accompaniment to the foregrounded cross-dressing nun. The stripes and the uniformity are all fitting because SLUG are one tight proposition. Musically, everything they do is confident, strident even. There is nothing tentative, subtle or slight about them. Every song is an exclamation mark, the rhythms underlined and in block caps.

But for such a solid offering, SLUG raise a lot of questions. Close your eyes. Orientate yourself. When is this music? What year is this?

After a brief Black-led intermission featuring the additional vocals of The Cornshed Sisters, the band are back but now bedecked in tight-fitting black long sleeved polo necks and berets a la Parisian Left Bank circa 30’s/40’s. An incredible drum solo gains in speed and intensity to restart the second act, leading this resistance against the fact, now faraway in my mind at least, that this is a Monday night.

During this second half, the drum solo sets the tone as SLUG proceed to wig out at every opportunity for extended periods. Personnel interchange instruments and finally, the songs begin to lose some of their fixed forms and explode into something more organic and alive. As Ian Black loses himself in the moment I feel myself urging him and the band to completely destroy everything in a shattering frenzy of distortion. The discipline of the tracks in the first half is just what allows the climactic sensation of the later tracks work so well.

Then they are gone, leaving an irresistible trail behind them glistening in the Manchester night.

You can check out SLUG here. They are on Twitter @SLUG_MrIBlack and you can find them on Facebook.