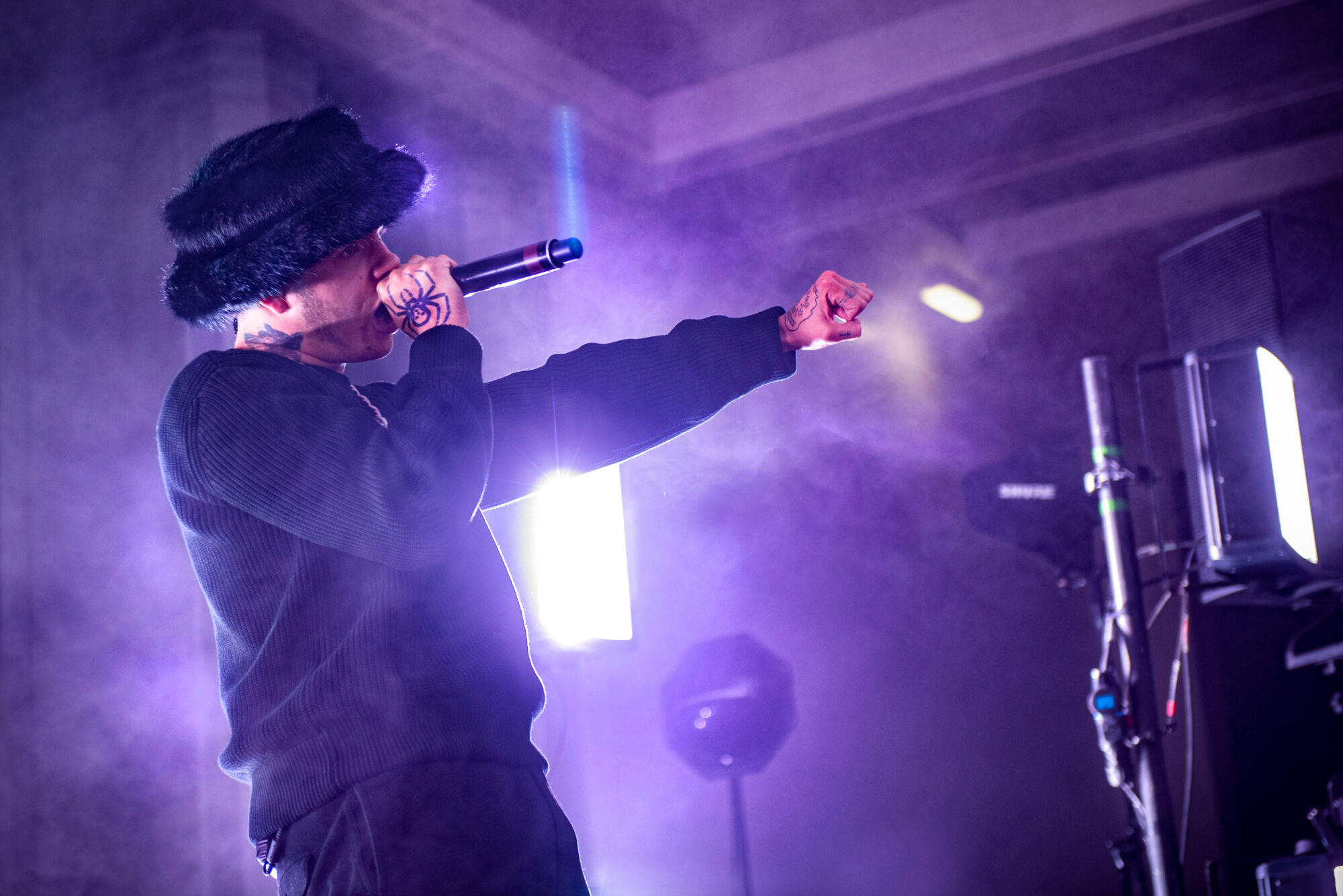 Northampton crossover king Slowthai has his Yorkshire fans in the palm of his hand, thanks to an anthem-packed set at Leeds University, writes Louder Than Wars Patrick Davies.

There’s a queue that snakes all around Leeds University’s campus, as keen revellers wait with anticipation for a show that should have originally taken place over a year ago. Even before support act and Slowthai collaborator Deb Never takes to the stage, the venue seems tightly packed for this leg of the Hell Is Home tour. While much of the crowd may only be familiar with Deb due to her appearance on the track Push (from the headliner’s second album TYRON), she commands the room well. Her admittance that this is her first run of UK shows outside of London is met with rapturous appreciation and of course the obligatory chants of “Yorkshire”. It’s a refrain that does seem to be met with a slight air of confusion from the US rapper and singer. 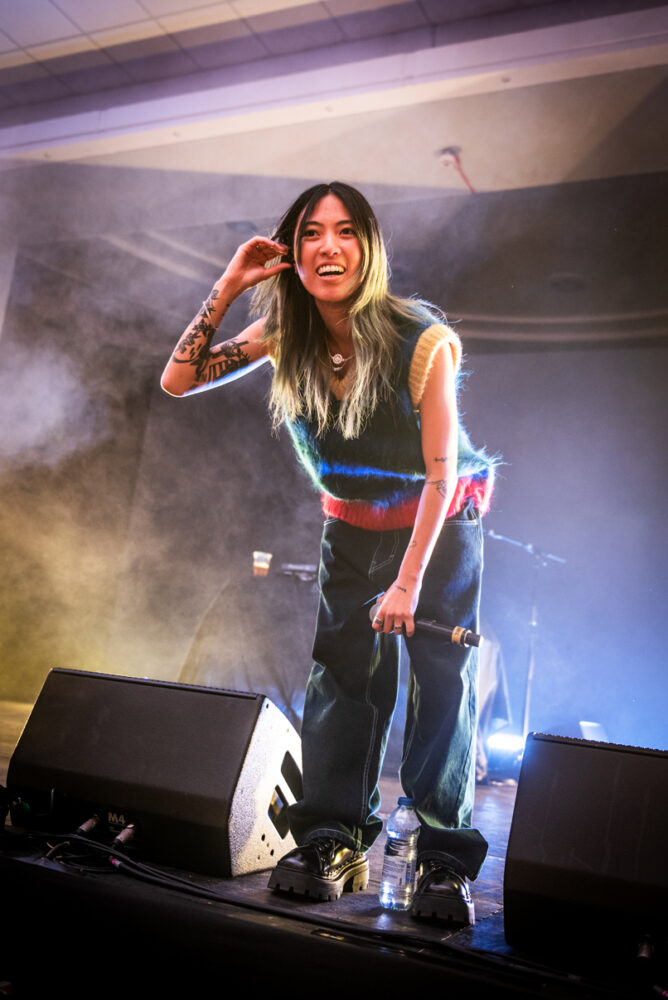 It’s a low-key lighting and stage setup for the opening set, that proves indicative of the main event. But this does nothing to quash Deb’s enthusiasm during a 30-minute performance, spanning hip-hop and pop, with more than enough catchy hooks to go around. Final number Pictures gets a great response as she brings her set to an end, but as previously eluded to, this isn’t the last time the audience will be seeing her this evening

The simplicity of the stage show means changeover times are nice and swift, leaving no time for the energy to drop. Not that there would be much chance of that anyway with Slowthai’s trademark exuberance waiting in the wings.

While Deb Never’s approach of taking to the stage with a DJ may have been minimalist, Slowthai’s is even more so. He arrives alone with no accomplice visible to trigger his backing tracks or whip up hype from the crowd. This bold, no-frills delivery could have the potential to fall flat for some hip-hop acts. But an aggressive start featuring Enemy and Skepta collaboration Cancelled has the mosh pits in full flow from the off.

Although it is indeed a full-throttle start to proceedings, this doesn’t necessarily characterise the full spectrum of Slowthai’s sound. He’s gained a reputation as one of the UK’s most versatile new artists in recent years. The pace is then switched seamlessly from one of aggression to anthemic reflection during NHS and I Tried.

With such an enforced lag between the release of TYRON and this tour, there could have been a risk that these tracks suffered from a slight reduction in impact. But instead, it seems the crowd’s thirst for a blowout has only increased with time. As the circle pits start to form, Slowthai (real name Tyron Frampton) still cannot hide his caring side, liaising with security up on the balcony to ensure all audience members are safe. 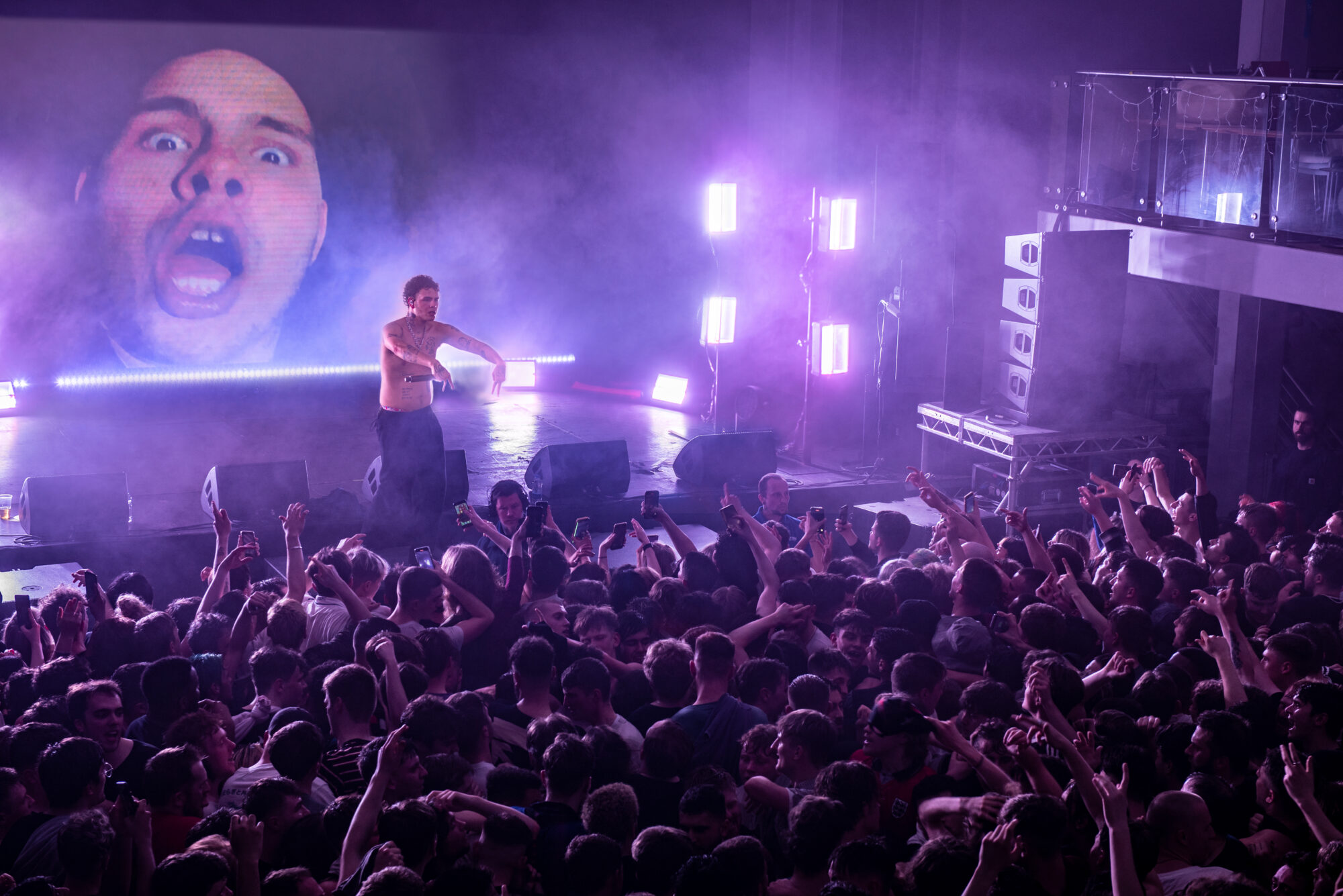 Deb Never comes out once again to a rousing version of Push, the only point in the set that Frampton does not perform alone. It really is commendable that even during unreleased tracks such as Mother and Fuck The Ops that follow, the audience is eternally attentive throughout. As the set goes on, it becomes clear just how great an arsenal of tracks Slowthai has accumulated in a relatively short space of time. His catalogue meanders from straight up grime to punk-enthused surrealism in a heartbeat, even stoking comparisons to spoken word legend Ian Dury on Mura Masa feature Deal Wiv It.

There’s a pause for life-affirming reflection, as Frampton shares his joy with the crowd at becoming a father and buying his first home since his last tour. There’s a touching moment of kinship too when he reveals his great grandfather was a Yorkshireman (cue those chants again). However, the high octane nature of his performance doesn’t subside for long, as Drug Dealer and Inglorious whip up a frenzy. 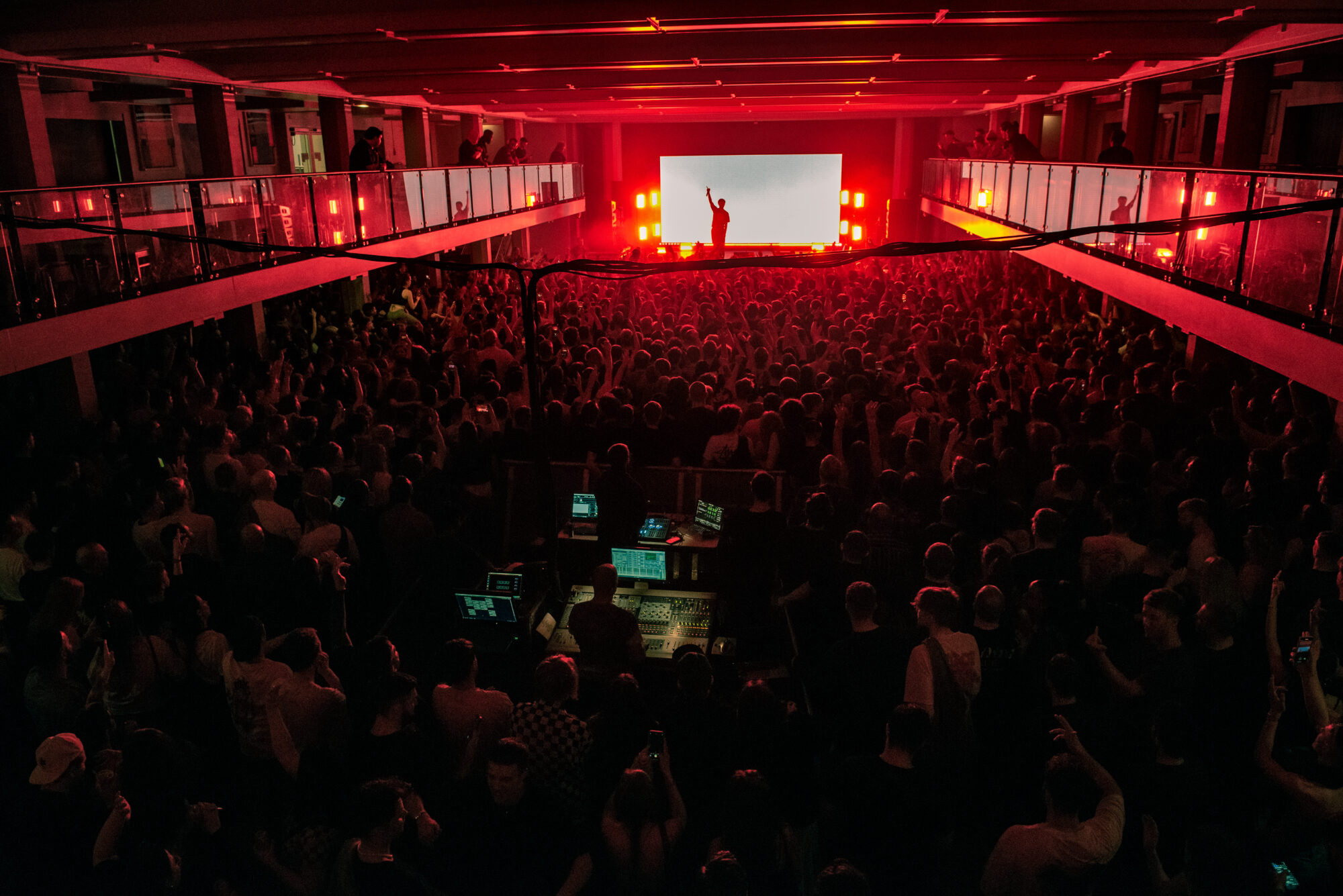 It’s a set that feels as if its comprised of a decade’s worth of material, rather than just three or four, as the boundless energy of Doorman follows on from the James Blake singalong Feel Away.

There truly has been something for everyone in the room on the Hell Is Home tour. It’s been delivered by a man who seems to be simultaneously growing as an artist and human being with every release. The crowd leave the venue with nothing but unbridled anticipation for album number three, and the hope of an accompanying tour to match the masterful performance they have witnessed tonight.

All words by Patrick Davies.