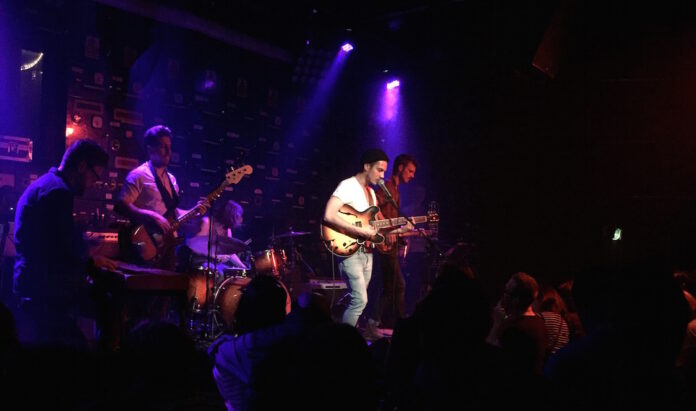 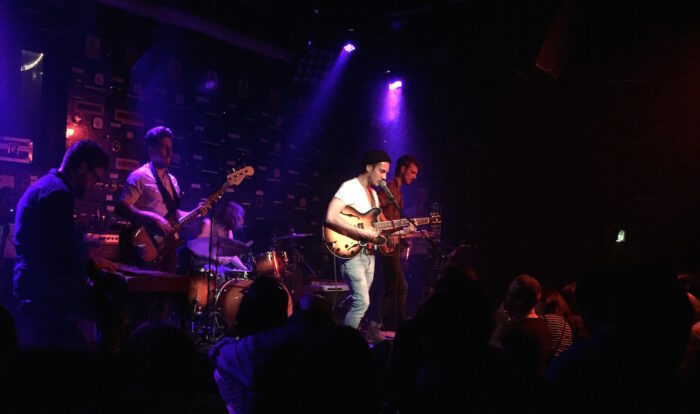 Slow Show take to the stage at Manchester’s Gorilla for a homecoming show of sorts. Louder Than War’s Pete Bernard was there.

It’s time for Manchester to take notice of its prodigal sons Slow Show. Once described as the most un-Manchester of Manchester bands, this night at Gorilla was a homecoming gig after a three week European tour which saw them being greeted by our continental cousins with as close to a frenzy as you can get at a Slow Show gig. Fans of the band have been known to “SHUSH!” any audience members ignorant enough to make a noise or talk during a Slow Show performance. That’s not to say there’s no atmosphere – there definitely is, and it’s an atmosphere of anticipation that turns to awe, and ends with celebration.

Returning to their Northern England roots like this, and bringing their dreamy brass band driven musical sonnets into Gorilla’s railway arch gig room, seems like the perfect ending to a chapter that’s seen these guys from Blueprint Studios release their debut album and become regulars on 6 Music. Tonight’s set is a showcase of the peaks and troughs in their music, the atmospheric highs and sudden drop-dead endings that characterise many of their songs. The phrase “slow burner” was re-written by Slow Show. Each song begins like it has no beginning, then builds and yields in equal measure before lulling you into sensing that a sonic earthquake might happen…. only for the vibrations to stop swiftly with a nod to the crowd.

So it’s slow, but it IS a show. And these guys can ROCK too! In a handful of songs the peaks are such that drummer Chris pounds away at his Mapex kit like Jesus pounding a bible. Guitarist Joel can become a guitar hero (though I would guess he’d not be bothered about that). He’s unfeasibly tall but looks cool, and the sounds from his guitar get more beautiful with each passing song. 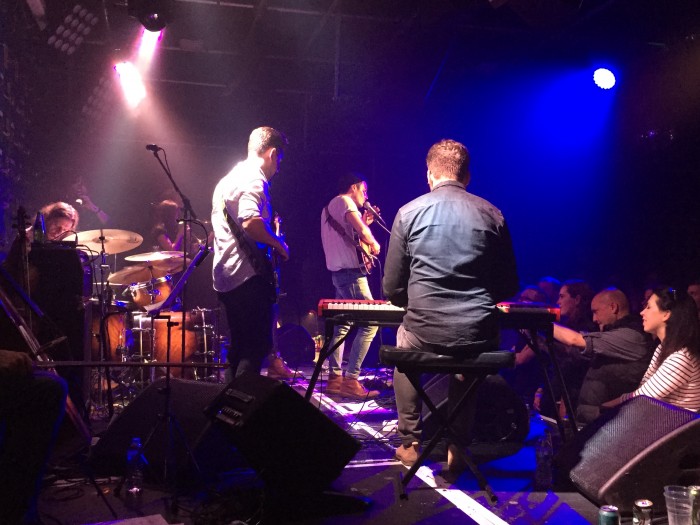 Then there’s Rob Goodwin, a man who seems genuinely gobsmacked (to use a great Northern word) with the affection bestowed on his band by its diminutive and committed legion of fans. Constantly thanking the crowd, Rob sometimes looks like a nervous hobo. When he puts his guitar aside for a few songs mid-set he takes on his true interesting character – part Michael Stipe, part Johnny Depp, his limbs seemingly trying to escape from the rest of his body as it pours itself into the songs. He’s not a classic audience-in-the-palm-of-his-hand frontman, but that doesn’t matter because the audience don’t need to be in his hands to understand his voice. Oh yes, that voice. Rob doesn’t sing the songs, he drawls them with a rasp that feels like cleaning your ears with diamonds. If I have one criticism, I just wish he’d let himself go every now and again and really cry out the lyrics like Thom Yorke or someone. Some of the songs are crying out for it.

“Lucky You Lucky Me” sees Rob and Joel play as a duo and is for me a highlight of the set, the two swapping guitar sounds like jewel thieves swapping rubies and pearls. Echoes, vibrations and jangles jump between the two as Rob describes a shared life of love in his home town.

And so, that home town (or at least a part of its populace) give Slow Show an ovation at the end of the performance. It’s back to Europe next for these busy musicians, but they know they can come back to England, particularly Manchester, and be welcomed like prodigal sons or rovers returning anytime.

All words by Pete Bernard. More writing by Pete on Louder Than War can be found at his author’s archive.