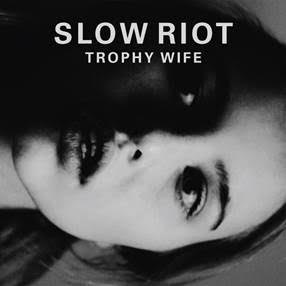 “Nice to meet you in the morning, when you greet me with a fist” begins guitarist/vocalist Niall Clancy, instantaneously setting the prevailing tone for single. A track about being in a relationship for all the wrong reasons, Trophy Wife exhibits the same, familiar darkness as their debut EP Cathedral, bringing to mind such post-punk royalty as Wire and Television whilst retaining an air of contemporary acts such as Eagulls.

Indeed, while such darkness is intrinsic to Slow Riot, Trophy Wife, despite its narrative, also offers Editors-esque pop polish to counterbalance the weight, and as such harbours an appeal more diverse than any of the aforementioned acts. And when B-Side Awake For Days is brought in to the equation, the inherent darkness is dispelled even further (though not completely), replaced instead by an understated brand of art-rock.

With their debut EP earning them lofty praise from tastemakers, it seems that the ball has very much began to roll for the Irish trio, and while many of their contemporaries and comparisons are making music a little bit too weighty to offer any commercial appeal, Trophy Wife manages to bridge the gap perfectly. Expect much more from these guys soon.