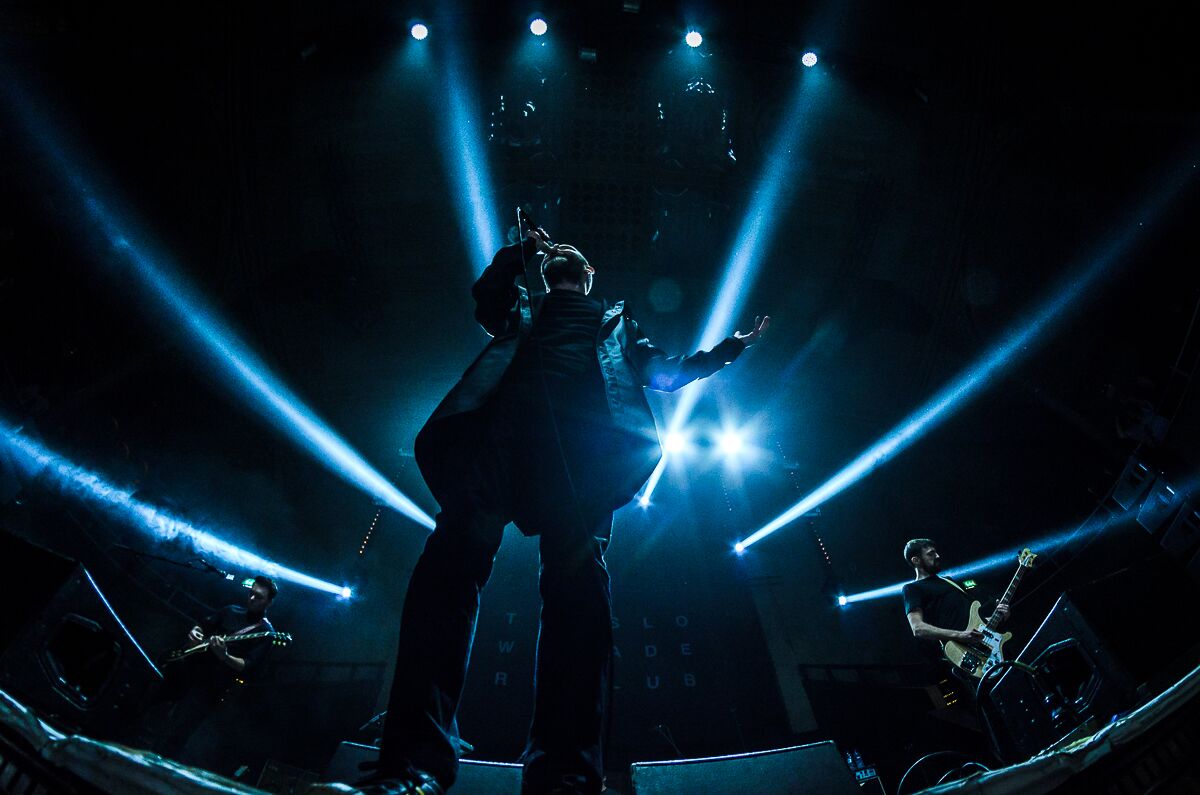 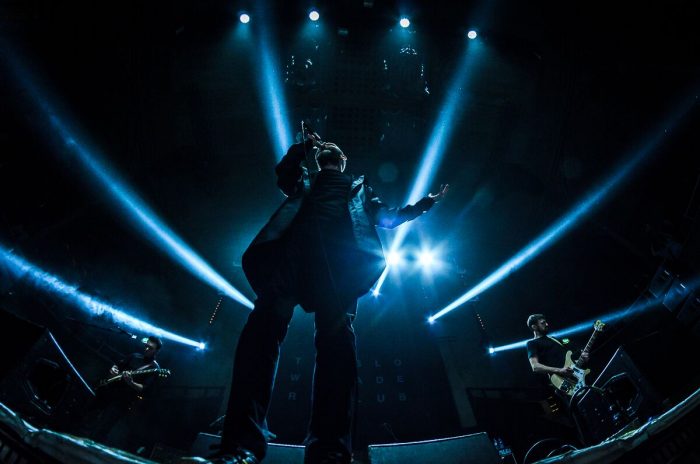 The Slow Readers Club – with support from Desperate Journalist
The Albert Hall, Manchester
24/11/2017

I felt like some ‘Desperate Journalist’ on Friday 24 November – and I mean that in both senses of the term. In a week in Manchester which began with the bustle of the Christmas markets and ended with icy rain on ‘Black Friday’ – a gig from The Slow Readers Club, supported by Desperate Journalist at The Albert Hall, was much-needed, says Louder Than War’s Emily Oldfield…

The Slow Readers Club are self-made musicians from Manchester – and a four-piece getting faster and faster. With the current line-up formed in 2013, this a band who have nurtured support and experimented with their sound over time – seemingly a recipe for success, as on their 2017 ‘Through The Shadows Tour’ they’ve been selling out venues up and down the country.

So that’s two fingers in the face of anyone who claims they are just appealing to their home crowd – as although, yes, Manchester’s Albert Hall was packed-out to high-enthusiasm – they’ve also sold-out The Garage in London and Nottingham’s Rescue Rooms. Not bad for a band who self-admittedly are in ‘celebration of the underdog’.

The thing about the music of The Slow Readers Club is that it is a celebration to which everyone is invited – and it addresses the highs and lows which makes the art of celebrating all the more poignant. There are elements of that satisfying Mancunian jangle on guitar from Kurtis Starkie, then structured into satisfying slices of electronica – which hit hard with James Ryan’s bass and billow out inspired, emotive melodies which melt into the deeper sounds of doom-pop.

They have popular appeal too– pulling a highly diverse crowd you may more readily associate with touring bands before the digital age kicked in –– but they’ve been going for less than 5 years; an impressive feat in itself. 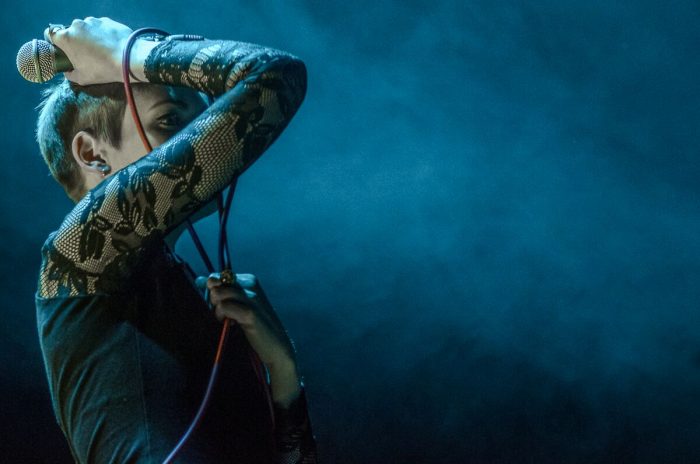 Supporting them were Desperate Journalist, a London-based band who gave real gravitas to grip the expectant crowd, pushing through on a punk edge – with their much-recommended album ‘Grow Up’ released earlier this year. Their name originates from my life – I mean, The Cure song, “Desperate Journalist in Ongoing Meaningful Review Situation” and they have a bristling energy capable of creating a buzz in a big room in the space of seconds.

Lead singer Jo Bevan was brilliantly captivating on stage, curling the mic lead round her neck, thrusting her frame into every track. And this isn’t just a case of presence, as powerful and creative vocals pack a punch – articulating unashamed anger and emotion with luscious, voluminous vocal flourishes – sometimes thickened at the end with cries and screams. It speaks to me, it shows and sashays through the seething uneasiness of our desperate, digital age.

Their mixture of emotive intensity yet captivating catchiness seemed ideal fuel for the entrance of The Slow Readers Club. The crowd by this point was electric, the anthemic chant of ‘Readers’ already resonant throughout the room, a sign not just a band appealing to fans – but exciting them, incensing them.

Then to enormous cheers, they took to the stage, turning out track after track of those satisfying beats and accessible yet interesting vocals – edging from the anthemic to the ethereal – which make The Slow Readers Club something you want to be part of.

Stand-out tracks early on were ‘Sirens’ with Aaron Starkie adding a soaring vocal delivery relayed back to him by the crowd, and the captivating ‘Start Again’, which he expressed with depth, hands poised like a ticking clock as the relentless rhythms delivered by David Whitworth’s never-failing drums surged onwards, thickened with bass and shimmering guitar.

And it’s clear that not just the older material appeals, as their new single ‘Lunatic’ had the sheer majority chanting along, turning over lyrics of clever social commentary combined with edgy electronic flourishes under an array of lights which made for a mesmerizing live show.

There is a different emotive angle this band address when you get the chance to see them on stage, and they certainly didn’t disappoint. For despite hard-hitting content, yet there was so much animation in the room, a massively diverse crowd coming together in singing and dancing to a celebration of what can happen when we mould melodies from life experience.

There was also some welcome versatility as Starkie turned to the keyboard to play one of their early tunes ‘Grace of God’ which wielded a little more of reflective mood; all with driving melodies which prevent stripped-back lyrics from feeling too overtly-simplistic.

Continuing to keep things varied, the running order too seemed well-coordinated between relaxed and rousing – with fan-favourite ‘Plant The Seed’ thundering in somewhere in the middle, tightly done in a way which had the audience working the floor until the final beat.

Yet what stands out as much as the music from this band, is their modesty – something that seems increasingly isolated from music, especially in the stage of the distance ‘digital’ provides. The band thanked the crowd not just in word, but in gesture, Starkie marking the distinct difference between ‘showman’ (more of a façade, I would say) and instead an articulate frontman, angling himself towards the audience, looking into people’s eyes, enjoying the music with them. 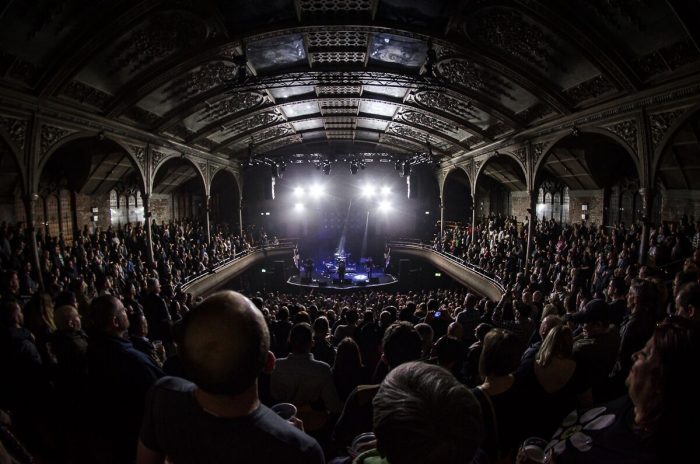 It was a highly enjoyable gig – and somewhat humbling, as Starkie asked if the band could take a picture of the audience at the end of their set. Still electrified from their hard-hitting encore of beat-bringing tracks finalised with the much-loved, ever-catchy ‘I Saw a Ghost’– the ‘Yes’ couldn’t have been more profound.

This is a band that don’t just deserve to do well, they do do well – and as the crowd danced under a surprise shower of enormous balloons, lit up from the inside, there was something almost emotional going on. They were home.

You can find The Slow Readers Club online here: https://www.theslowreadersclub.co.uk/. They’re also on Facebook and Twitter, as @slowreadersclub

Photos with thanks to Trust A Fox Photography.  All words by Emily Oldfield, also on Twitter as @EmilyvOldfield