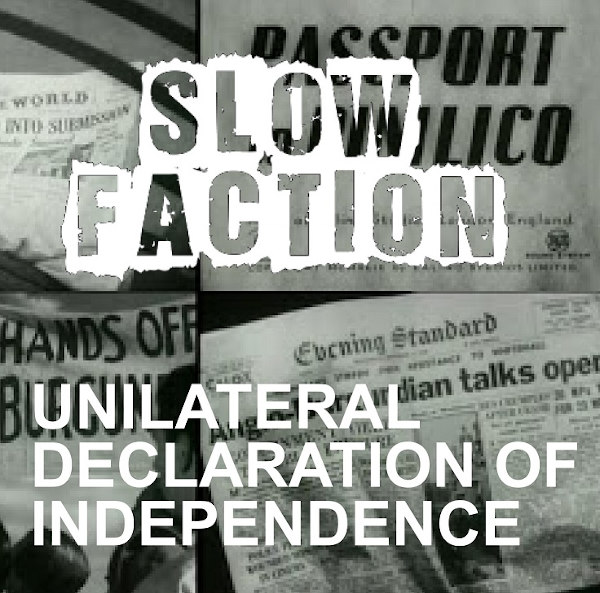 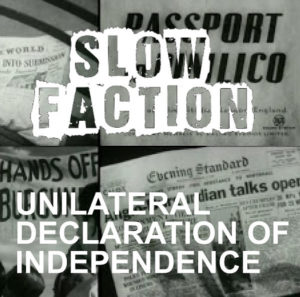 The latest album from South London’s Slow Faction paints a gritty picture of the UK, a land of poverty and fascism, over a Clash inspired backdrop. But the lasting message they leave is to know your enemy and fight back.  Transmission from Nathan Brown.

Slow Faction play melodic, anthemic, mid paced guitar driven punk rock with a political message. There are hints of Angelic Upstarts, Menace and even an occasional similarity to first-generation-now-reformed hero Johnny Moped. But the main influence for this band is clearly The Clash. When my fellow LTW writer Ged Babey reviewed Slow Faction’s last album he drew similar comparisons and then cited the problem with bands of this nature: “They are never gonna be as good as the Clash and they can come over as a bit dull, worthy and predictable and lapse into cliche very easily.” I’m in agreement with Ged, and further agree with his conclusion that Slow Faction don’t fall into this typical “We wanna be The Clash” bracket.

Many bands of that ilk would be chasing support slots at big venues and sign up with an agency.  Not Slow Faction – they are definitely of the DIY scene. Singer/guitarist John in particular has been heavily involved in the South London Punk Collective and I first met him with he was doing a stint behind the P.A. controls for a gig at Brixton’s Hand in Hand (another London music venue sadly recently lost).

On this latest album Slow Faction appeal to their own Blank Generation, some of whom have lost their way and drifted to the (far) right.  The golden rule of any battle is to know your enemy and Slow Faction have a clear understanding of the people who hate:

And as well as knowing the problem, Slow Faction know the solution. On Antifascist they stand up for the people fighting the far right who are now demonised by a hysterical right wing media: “It’s quite simple – Antifascists and fascists are not the same”

The album taken as a whole conveys a gritty image of Brexit Britain, full of hatred, and laments how bad things have got in what they refer to as this “failed state”:

When you look at it that way, it’s no surprise that Slow Faction want to make a Unilateral Declaration of Independence and rid themselves of this country. But the rest of the songs make it clear they’d rather not cop out – they want to fight for its heart and soul. It’s a shame that the ears who ought to hear this message will probably never receive it. However, there is something to be said for the catharsis of getting anger out of your system.  And sharing your angst helps build solidarity – we are not alone.

Slow Faction don’t just want to give up, and want to fight back. In case you were in any doubt, they top off the 8 original tracks with a reworking of Woody Guthrie’s All You Fascists Bound To Lose. It had to be really! I’m pretty sure another Woody, Joe Strummer, would have approved of the Slow Faction outlook. “You make a stand or you stand for nothing” is right out of the book of Saint Joe.

You can buy the CD (cheap at a fiver!) or download it on a pay as you feel basis from Bandcamp and find Slow Faction on Facebook.