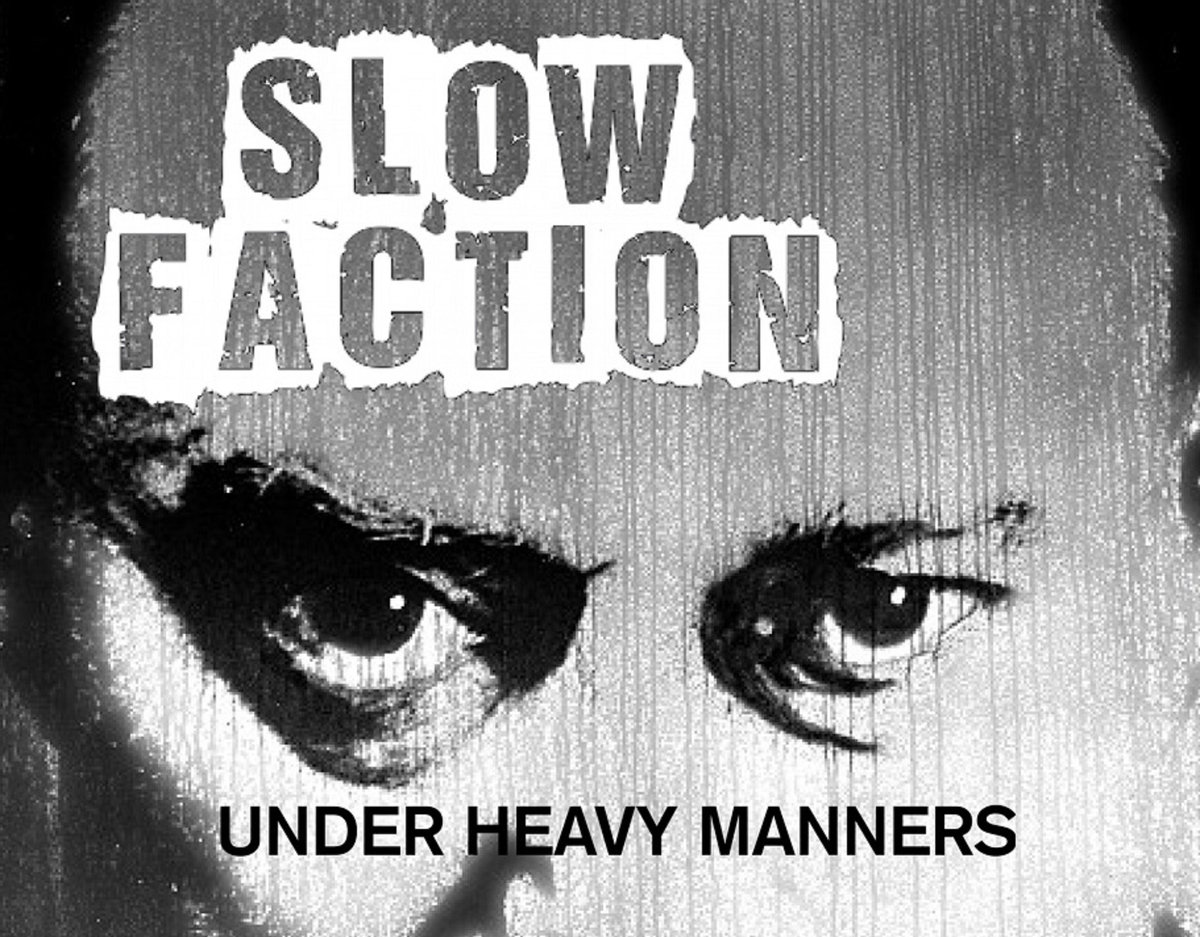 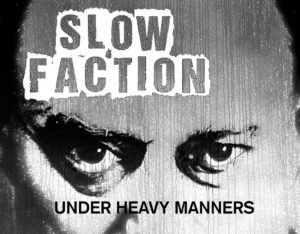 I have a mate, who refers to another mutual mate, behind his back, as ‘Wolfie’.

It’s after the character in Citizen Smith; -an inept self-styled ‘freedom fighter’ from the 1977-80 Comedy series.  You can guess the type of person he is: Into radical politics and protest, always metaphorically waving a banner….  “Power to the Peo-puuuuull!” ( Wakes a sleeping baby…)   It’s not a particularly unkind jibe, we are all Left-ish humanitarians but it’s a common thing to take the mick out of the more vocal social justice warriors.

And thinking about it seriously for a second, Comedy writers & performers are probably to blame – from Wolfie Smith to Ben Elton and in the punk rock sphere ‘Alan Parker Urban Warrior and Fred Armisens Ian Rubbish.  It is as if they parody and mock in order to take the ‘power’ and potential influence away from ‘radicals’ and those who at least try to ‘make a difference’…

This is tangentially relevant to Slow Faction because they are a seriously political band. Inspired musically by the Clash and the class of ’77  from whom they got their idea that music and social justice/political awareness must go together, or else there is no point to it.  I am not that keen on bands like this generally speaking for two reasons; They are never gonna be as good as the Clash and they can come over as a bit dull, worthy and predictable and lapse into cliche very easily.  They can be dismissed as Wolfie Smiths in punk clothing.

That said, just one play all the way through of this album (with the lyric sheet to hand) and I decide my preconceptions were wrong.  This is a very good album. Words and Music.  The wheel is not reinvented. No new ground is broken. But it’s good.

First song. the title track, ‘Under Heavy Manners‘ – a title itself taken from a stenciled slogan on some Clash trousers. It takes in a lot of heavy shit lyrically: –  consumerism, reality TV as valium for the Masses, war,  media,  class war, erosion of civil liberties…

And we all sit at home and pray to the West
To our false God, Democracy
They pretend our opinions really count
We pretend that we’re really free

There’s a media blackout on the voices of dissent
As they lead us to another war …..

It’s an articulate piece of political song-writing if you accept that this kind of thing has been done many times before, albeit way back in the late Seventies and early Eighties,  There are a few hints that its set NOW – the D-List Celebs and CCTV -and not then.

59 Minutes Past 11 is partly about how the profits to be made in Arms dealing and capitalism perpetuate wars…  and musically it’s still halfway between the Clash debut album and Give ‘Em Enough Rope.   I like the line ‘There’s a water cannon waiting and it’s paid for by our taxes’.

Track 3 out of the six on this mini-album is Poundland Society and this is the one which convinced me that Slow Faction are a bloody good band.  This is the best post-Brexit punk rock state-of-the-nation song I’ve heard. They write in straight-forward language, without the use of swearing to emphasize, and with not a single word wasted. Musically strong, a great chorus and wave upon wave of powerchords and cymbal crashes.  (I’d urge you to check out the lyrics to this and all the songs on the bandcamp page.)

Digressing for a moment – I was trying to work out why a band would choose to call themselves  ‘Slow Faction’… and noticed they were part of the  South London Punks Collective.  So maybe the first part of the name is an acronym;  SL must be South London…  and the OW  -Older Wiser?  (Or maybe it’s  classic punk detournement – the South London Old Wankers?)  Then I thought, maybe it’s the same as the old Manchester fanzine Shy Talk: You only ‘get it’ when you say it aloud… ‘Shy Talk’ becomes Shitehawk and ‘Slow Faction’ becomes Sloth Action.  Brilliant!  Sloth Versus Action!  Which Side Are You On Brother?!

It’s neither it transpires – the Faction is from the Red Army Faction and the word Slow, painted on a “twisty, quiet, country road in the middle of the night” had a band member “transfixed” due to some potent magic mushrooms, one hot summer night long ago!

(Back to the album…)  There’s A War Going On  is about gentrification, austerity, the tabloid demagogues and their scapegoating and  demonising ….. and as you can see from the beginning of this review is a modern-day echo of  Ralph McTells  Streets of London.   That said it is more ferocious in its attack on the complicit complacency of the middle classes. Musically there are a few steals from the Stiff Little Fingers, a bassline which sounds a bit Nice and Sleazy and even a very ‘Another Girl’… guitar break – but who cares,  all property (and riffs) are theft!

The Definition of Madness  concerns the rich, bankers and governments mutual interests and history repeating.  The lines “Now it’s time to start the revolution… And put these bastards up against the wall – up against the wall” is very punk cliché indeed and recalls an old Tom Robinson Band song as well. That said, it’s still a likeable song.

The closing track though is the best. The tune is the standard issue SLF / Clash / Buzzcocks punkarama but lyrically In Your God’s Name is an original, thought-provoking song about trying to understand the background and motivation of jihadi’s.   Ending with a line addressing them ” When will you understand, you weren’t given life so that you could go and kill….”  There probably are others but I’ve not heard a song addressing the issue in such a reasoned way.

In the hands of a lesser band these songs might be a bit relentlessly ‘political’ and ‘depressing’ – but the music is so spot-on and tunefully perfect-punk that this is simply a great mini-album.  The vibrancy of the music makes the songs defiant in the face of adversity and all the odds.  Slow Faction remind me a bit of Subhumans; only less manic, more than any of the obvious Class of ’77.  That said the bands lyrics are approaching the quality of Englands finest protest songwriter TV Smith.

Our aim is to make the best music with the best lyrics we can muster.  We couldn’t get onstage and sing songs about fucking, drinking and wanking….or songs about ACAB…we want to create something of lasting value.

Well, I would say that with this album, he, (Kit Gould – drums, Umbi Liszka – bass and Lee Peterson – rhythm guitar) have done so and made the best album they possibly could have, which stands head and shoulders above similar bands in their age group on their budget, all over the UK.

Punk is a broad church encompassing a lot of conflicting attitudes and outlooks – and there is a place for serious-minded bands like Slow Faction when the bleakness of the pictures painted by the words are made livid and vivid by the music.

The album and previous EP’s are all available from Bandcamp