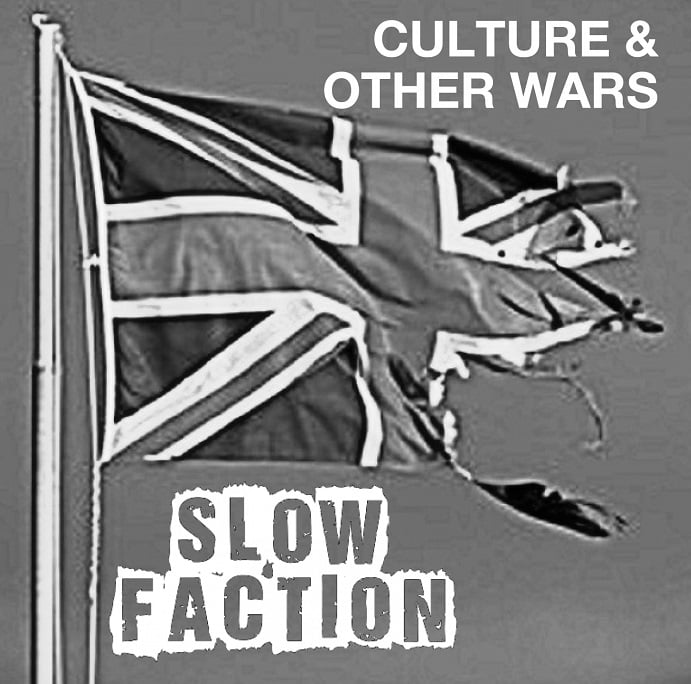 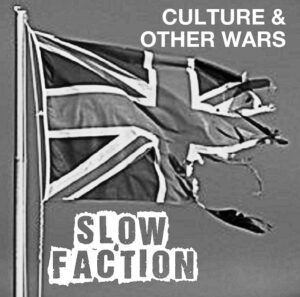 Slow Faction: Culture and Other Wars (self released)

South London stalwarts of independent punk rock Slow Faction are no strangers to LTW. We reviewed Under Heavy Manners in 2017. Joe White Interviewed them and Unilateral Declaration of Independence was reviewed in 2019. This is the first new recordings from maybe the UK’s finest exponents of ‘Conscious Old-School Punk’.  Ged Babey reviews and wonders if it’s cultural appropriation calling them that.

There was an American blogger and fan who when he reviewed the band previously said ‘Slow Faction don’t write songs about bubblegum, fast cars and pretty girls’. (Like a lot of young American pop-punk bands).  Songwriter John Youens “took this to be a challenge” and starting with the title,  Bubblegum For Josh, wrote the song.

Of course the song ends up with just as much ‘socio-political content’ as any other Slow Faction song.   He bemoans the apathy of young punks: the fact that California’s dreaming and the kids just want songs without meaning.

And is fully aware of how he is perceived: They think I’m a walking misery / but I just write about the things I see…

But worst of all, the original punk generation now include a lot of old fools who read the Daily Mail, vote Tory and still follow the lead of John Lydon. The song really takes them to task. Former punks spouting Farage-isms and getting their views from the Fail are… so far gone it’s hard to tell / What separates them from the EDL.

Musically it’s as energetic and tuneful as any of their songs, with a great sarcastic shout of ‘It’s Only Rock’n’Roll!’ before the guitar solo.

The rest of the mini album is Slow Faction doing what they do.  Politics and Punk Rock. And doing it better than ever.

The song titles give clear pointers to the subjects under discussion.  Culture War, Empire, 1945, La Commune and You’ve Been Fooled Again.

1945 seems to attempt to relate the complete history of American Foreign Policy 1945 – 2020 into a four minute rock’n’roll song. Every president seems to get a name-check at least. It’s a bloody history lesson – but fast and action-packed with a choppy (and almost punk-ska) Subhumans-style gait.

Culture War covers how social media became the battlefield for propaganda and a weapon of mass distraction. Musically it barrels along with power-chords a-plenty and the ever-present vibe of prime Clash.

You’ve Been Fooled Again – covers Brexit: A nation that no longer cares – a state of terminal despair / The liars and cheats, they won the night / will the last one here turn out the lights.  It should be a despairing blues song – wailing into the void – or a dark post-punk dirge at least – but no, Slow Faction have to retain the musical ebullience and vibrancy of punk at it’s most positive.

La Commune is five and a half minutes of nicely measured and paced music – the bassline is wonderful -the guitar sharp, the drumming solid and dynamic. The lyric the story of the Paris Commune of 1871 that took power for a few months before they were crushed and 20,000 women and men died for the city.

Empire is another history lesson you probably won’t get at school… with the energised tunefulness and pace of classic 1978 punk: Africa, India and Ireland / From The Caribbean to The Transvaal / Malaysia, China, Pakistan / The blood of Empire soaked these lands

This mini-LP probably is Slow Faction at their very best – but to be frank, they’ve never released an average or substandard recording or song.

We have regrouped post-Covid break with a new drummer and bassist and are coming back stronger than before the enforced break. I am very excited about this new release as I feel this is our strongest work yet, both musically and lyrically.  (John -vocalist / guitarist / lyricist)

Slow Faction are a great, sincere and a committed band. They are really good at what they do – but, I would like to see what they can do in addition to replicating their live sound.  Slow down, unplug, see if they can do a less frantic type of protest song – incorporate reggae or country or folk influences – then again, that may be an even more cliched and predictable route for the elder punk.  (It’s not a criticism of this mini-album, just an idea for what comes next maybe… )

Over the decades punk has become a parody of itself and ‘comedic’ elements abound and are lauded (and sometimes welcome) but it is always good when a punk band has serious intent and content. But also ‘rocks’ and sounds as life-affirming as the first time you heard ‘punk rock electric guitar’.

You can buy the CD or download it from Bandcamp

All words  Ged Babey  All quotes from the artist in italics

This album was written, recorded and scheduled for release prior to the war in Ukraine. People who follow the band understand that. but it’s all too easy to be misconstrued in the current climate.  Slow Faction are anti-war, anti-violence, anti-racist, anti-nationalist and anti-imperialist.