Home Blogs Slothrust: Of Course You Do – album review 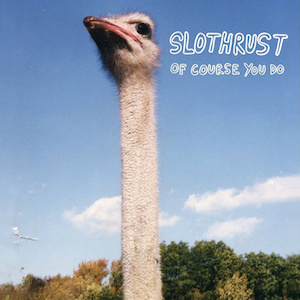 Slothrust – Of Course You Do (Badabing Records)

Slothrust tick all the boxes with their latest album. The Brooklyn three-piece stun Nat Lyon with their honesty, rawness and sonic power. They even, almost, cure his flu.

Like I do every Tuesday- I was listening to the Take Off Your Sunglasses show on 107.8 (Stockport) and taking notes.  When Huw and Martin played Homewreck Wifey by the Brooklyn-based three-piece Slothrust, I jotted down in my notebook: “Slothrust- THIS.”  And then the rest of the week went straight to hell as a flu virus invaded my body.

For days I thrashed around uncomfortably on the sofa, listening to the latest Slothrust release, Of Course You Do, which turned out to be a great soundtrack for a fever-induced delirium.  Between shots of DayQuil, gin, and periods of unconsciousness, I would occasionally wake up to the sound of guitar feedback blasting in my headphones.  And I knew everything was going to be ok.

Of Course You Do is the second full-length release from Slothrust and their debut on the prestigious Badabing label.  And it’s the perfect soundtrack for a fever-induced dreamworld.

What you should know: Slothrust is fucking TIGHT.  This is a guitar album, centred around Leah Wellbaum’s multi-tracked wall of noise and super crispy chords.  But the sonic impact, and the Slothrust “sound” are equally formed from the punchy bass played by Kyle Bann and the hammering percussion of Will Gorin.  The three-piece has always been my favorite lineup and the Slothrust crew checks all the right boxes.  Credit is also due to the outstanding engineering of Tom Tierney and Alex Mead-Fox at the Spaceman Sound Studio and Joe Saliba at The Mad Oak Studio – because the engineering of this album is gut-kicking and visceral.

The combination of Wellbaum’s writing and composition, bonded at the molecular level with Bann and Gorin’s foundation and brilliant engineering, make Of Course You Do an awesome post-punk statement over the course of ten very well-balanced songs.  Fever or no fever – this album gets your attention because it kicks you in the head with overdriven guitars and a killer beat.  If you’re looking for reference points to decode any of the above (yes, I am still chugging DayQuil while I’m writing this – the gin will come later) they would include Deerhunter, The Minutemen, Mission of Burma, Slint, Peg and The Lower Dens, to name a few.

While the musical composition, performance, and engineering are all top notch- it’s Wellbaum’s writing that ties the package together.  The lyrics are like journal entries and in many ways topically similar to Stephen Steinbrink.  Some days are up and some days are downers.  And while you might not know where the day will take you when you wake up you know that you will get there on your own terms.  Mix that with Wellbaum’s  mundane (i.e. REAL) day in the life observations and you end up with a narrative that does not hide emotions, but she also refuses to wear them on her sleeve.

From the opener, Cubicle, Wellbaum plays and sings with honesty and intensity: “I try my best to hide that I care, but you really got me wrong,” is sung to a steamrolling riff, with well-timed and well-tuned feedback and a wall of guitars that punctuate each verse.  This is the kind of stuff that makes me grin if it hits me the first time I hear it – and I am still grinning like an idiot while I’m writing this.  Of Course You Do is a guidebook on how to write killer post-punk-speed-power-ballads.  In this respect, Crockpot is one of the standouts with the line, “Don’t shake hands with the lonely kids, ’cause I hear that shit’s contagious.”  The lyrics are direct, honest, and disarming.  Wellbaum’s vocal delivery has a unique effect – observations are stated plainly and it takes a second for the meaning of the words to sink in.  While the delivery is at times deadpan, it has impact.  Check off the box for great writing and singing.

Thrashing guitars with lyrics like, “Cause I’m a hamster in a plastic ball and I’m running towards your fireplace,” interwoven with quirky changes in time signatures on the song Juice showcase Wellbaum’s brilliant compositional style.  While there is a pretty consistent Slothrust “sound” to the album (and one that they uniquely own) each song is different in structure, which makes Of Course You Do a damn interesting listen.

The ten songs shift different gears.  Some start soft and go big (Crockpot, Magnets, Pt. 1 and Pt. 2.).  Others start big and get bigger (Cubicle, Juice, Homewreck Wifey).  Every song has a strong rhythmic drive – that subtly wobble and weave in unpredictable and very pleasing ways.   Time signatures change multiple times in Slothrust songs but the sound is always tight and the changes are well crafted and expertly performed.

Of Course You Do is raw and honest in both the performance and lyrics.  This is very much music of our time that documents lives spent in cubicles, lives spent in a state of self-doubt and entire lives in pursuit of just trying to figure out how to sort it.  In most cases the outlook might seem gloomy but there’s also a 50% chance of humour.  The lyrics are wrapped in a highly textured soundscape that percussively (and literally) push you along the ten tracks.  The song structures are intricate (despite the wall of noise), and Slothrust is not afraid to wander off the trail.

The album closer, Beowulf, provides a great conclusion to the Slothrust story and all of their signature elements are welded together.  The song starts as a psych-rock jam that turns on a dime into a RATM/Black Flag- sounding riff (and Wellbaum can shred) before doing an immediate 180-degree turn.   It sounds like three very different songs woven together – and in each case the changes hinge on Gorin’s precise percussion.  Beowulf also demonstrates the range of sonics and how engineering enhances the Slothrust sound.  This song, as well as the rest of the album, has great audio presence, made only possible by great engineering.  The sound is crisp and in your face – as though you have your face pressed up against the cloth of the speaker.  THIS IS A GOOD THING.  Of Course You Do sounds bright without being screechy.  The recording provides great separation between Bann’s bass, Gorin’s drums and Wellbaum’s guitars and vocals- and each instrument has a sonic depth that combined make that Slothrust sound.

And it’s a great fucking sound.

You can purchase Of Course You Do via: Badabing Records: badabing.com.

All words by Nat Lyon. Find his Louder Than War archive here.