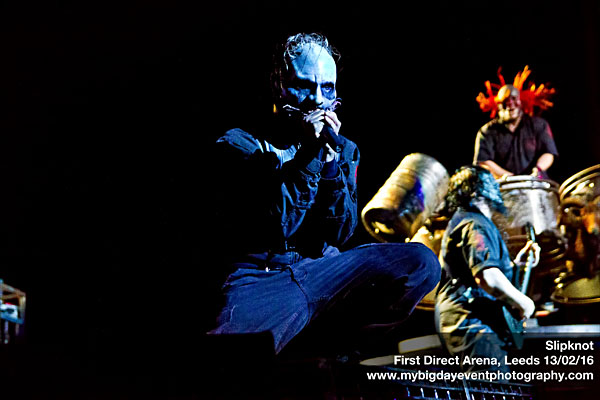 My first trip to the new First Direct Arena in Leeds, (well newish – it opened in 2013) and my first Slipknot gig which means that if you’re an expert on twin cities metal and you’re looking for a detailed comparison of this and other great Slipknot shows you should move along now. Nothing for you here except slack jawed amazement, which you know all about already.

The arena is an interesting place – relatively small in terms of capacity at only thirteen thousand (compared to 20 odd thousand in Manchester), and arranged in a huge fan. It’s a good venue and the staff are nice. It makes a nice change to turn up with a camera and not be treated like shit. 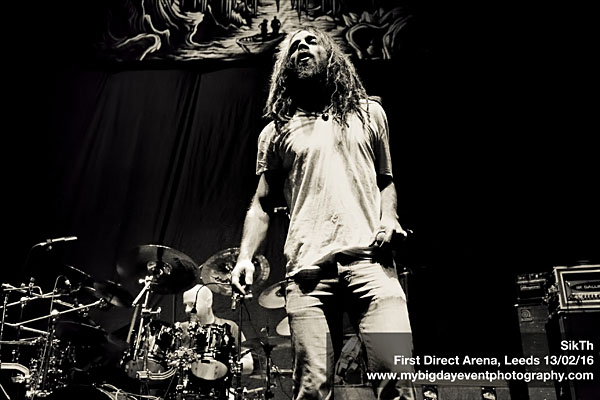 First up are Watford based progressive metal outfit SikTh who have made a welcome return to the music scene after a hiatus of several years, accompanied by a critically acclaimed EP – Opacities. They’re an energetic outfit – it’s a long time since I’ve seen grown men actually skip around a stage, and the guy riding the invisible hobby horse is particularly impressive. I’ve read that at some shows the Slipkot crowd have been somewhat bewildered by Sikth but they seem to go down just fine with a set that seems much heavier and less melodic than their recorded output, a fantastic and mesmerising blend of screams and growls on top of complex drum patterns and dissonant guitars. 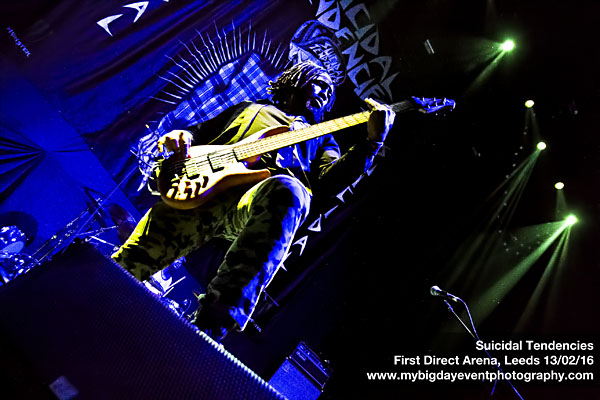 Suicidal Tendencies, Californian originators of crossover thrash are up next and they’re another band that circulate rapidly around the darkened stage. At first I have trouble keeping track of exactly how any of them there are but there seem to be five. They certainly get the crowd on side and during Cycovision they divide the assembled multitude down the middle for a remarkably vigorous Wall Of Death. They’re masters of the art of whipping up a frenzy and lead several minutes worth of chanting of their initials between choruses.

After an introductory tribute of Ashes To Ashes, Slipknot take to an elaborately dressed stage, which I think is meant to represent a high school theatre. There’s a raised stage area reached via a curving double ramp decorated with rows of light bulbs. There are more bulbs strung high up in festoons high up which give the whole thing an old fashioned dilapidated ballroom air and on the back wall a succession of remarkably high quality films are projected, featuring large numbers of those pink maggots that are particularly good for catching roach, facial decortication and incendiary behaviour with shop window dummies. 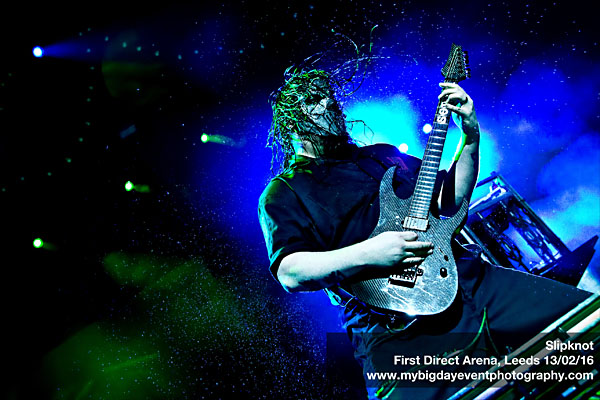 On either side of the stage are two percussion sets composed of beer kegs and dustbins, decorated with goatheads and affixed to spinning stages mounted on scissor lifts. It’s utterly glorious and bonkers and it seems almost purposefully designed to undercut the menace of the lyrics. It’s difficult to take anything seriously when percussionist Shawn Crahan is banging the living daylights out of some big tins with a baseball bat. At some point one of the cans becomes detached and gets hurled across the stage but I fail to see who is responsible and therefore do not offer to give evidence.

The set kicks off with The Negative One from The Gray Chapter and then into Disasterpiece from the Iowa album, whose fifteeen year anniversary the band are celebrating. That album and it’s predecessor Slipknot dominate a set from which several crowd pleasers, such as Before I Forget, The Heretic Anthem, Vermillion and People = Shit are absent.

Slipknot’s performance is remarkable for its relentlessness and its sheer brutal efficiency. Under all that latex they must be exhausted – it’s exhausting just watching them. At any given moment there’s no guarantee who will be at their post and who will be off on a marauding raid around the stage, climbing onto and falling off speakers, leaping from the raised stage back into designated position. There are several occasions when one worries that one or more of them is going to do themselves a mischief. They may be doing a passable imitation of chaos on stage but it doesn’t extend to their performance which is as tight as a drum and completely compelling. 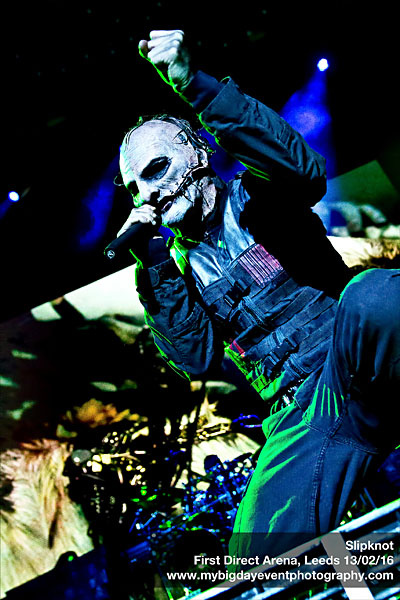 There’s nothing pretty about it of course. When Corey Taylor sings “I wanna cut your throat and fuck the wound” he sounds like he means it, but he also addresses the assembled mother fuckers as family, and describes how much it means to him that the band’s music brings people together. Judging by the roar that greets this statement it’s an opinion shared by most of those present, a kind of brotherhood (and sisterhood) or self designated outsiders and it fits well with Taylor’s recent comments on the Nazi salute performed on stage by Phil Anselmo of Pantera.

The show closes with Surfacing, Left Behind and Spit It Out and the crowd leave happy, especially the hard core contingent who have been treated to several relative obscurities from the back catalogue. It’s been a fascinating night of contrasting styles and I shall be keeping my eyes open for the return of all three bands, (next stop Camden Rocks maybe?). Outside the world seems strangely quiet but the siblinghood of outsiders are keeping the faith and I don’t think the guy with the blanket and the paper cup can quite believe his luck.

All words by idp. More work by idp can be found in his Louder Than Wararchive. His photography website is here and his photo blog is here.