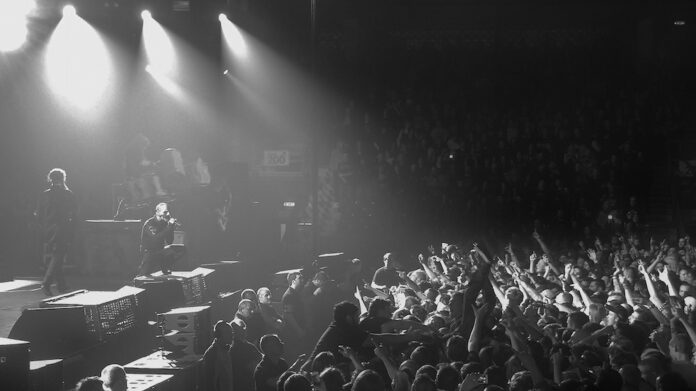 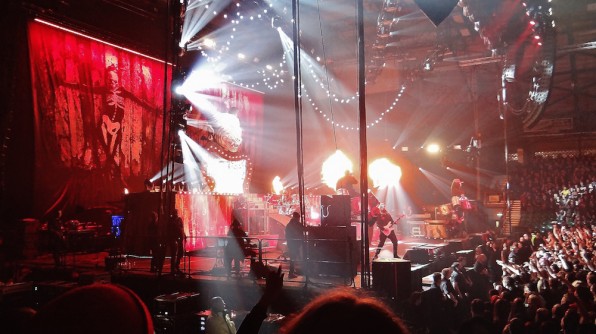 After yet another of their now customary hiatus’, one of the biggest contemporary metal bands in the universe, Slipknot, returned last year with a new album, .5: The Gray Chapter. Now touring the album they played Newcastle Arena last week where, much to his surprise, Louder Than War’s Andy Santiago found himself in the audience.

You just have to love spur of the moment, totally unplanned gigs.

Sunday night and I’m having a pint and throwing the darts when the following question is asked, “You up for a bit of Slipknot and KoRn tomorrow?”

Damn right I am!

So, 24 hours later after a trot up the A1 to Newcastle, we arrive at the arena to find possibly the biggest police presence I’ve ever seen at a metal gig. I really don’t understand why it was so heavy, I’ve been to hundreds of metal gigs over the years and never seen anything to justify such numbers. Maybe it was because the local constabulary had found out about the reputation of the first band of the night, from Flint in Michigan, King 810.

I was aware of the controversy (hype?) surrounding this band and was most insistent that we got there early enough to check out King 810 and to see if the stories of them being the ‘most violent band in the world’ had any substance. An interesting 30 minutes was in store.

After an over-long and possibly the most cringe-worthy intro tape I’ve ever heard this collection of ‘hardmen’ took to the stage and blustered through a truly awful set.
Imagine a white boy metal band who desperately wanted to be NWA but ended up a sub-standard Insane Clown Posse and you won’t be far away from the truth.
As the bassist threw his mic stand around repeatedly, the chief bad ass left the stage and returned shirtless to display his tattoos and to deliver some of the worst lyrics I’ve ever heard.

Wow. Where do you go from there? The stench of apathy and bemusement hung in the air long after King 810 left the stage. 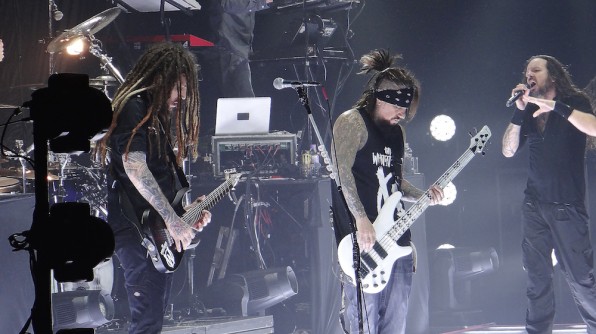 KoRn are a band I’ve always had a soft spot for and have seen them live numerous times over the year. To some extent they have been quite hit and miss on occasions but when they are firing, KoRn can be nothing short of incredible. Tonight was to be one of those nights.

There can be no argument that KoRn are true pioneers of the whole ‘Nu-Metal’ sound. The downtuned riffs, unique bass sound and borderline Hip Hop drumbeats set them aside from other bands of that time. And while many of these bands have (rightfully) fallen by the wayside KoRn continue to hold their own. We’ll even forgive their brief flirtation with Dubstep!

With a stage set that looks something like an 80s disco with its flashing light dancefloor and pink and purple lighting above, KoRn come on and rip into the grinding gibberish that is opener, ‘Twist’ and it all looks reassuringly familiar. Frontman Jonathan Davies twisting and contorting behind his HR Geiger designed mic stand, guitarists Munky and Head a blur of flailing dreads and 7 string riffs and bassist Fieldy shuffling about producing that signature KoRn rumble

The sound of ‘Here to Stay’ sets off the Newcastle crowd for the first time of the evening, pits break out all over the arena floor and by the time the song reaches it’s irresistible “bring it down” mid-section, the room is bouncing.

KoRn spend the best part of an hour banging out the hits and looking like they are having a blast doing so. When Jonathan goes off stage and returns with his trademark bagpipes the crowd go absolutely berserk howling along to the nursery rhyme lyrics of ‘Shoots and Ladders’ and gleefully murdering each other in pits that stretch to the very back of the arena.

The closing triumvirate of ‘Got the Life’, ‘Freak on a Leash’ and the anthemic ‘Blind’ brings an absolutely storming set to an end leaving the evenings headliners with quite a hard act to follow. 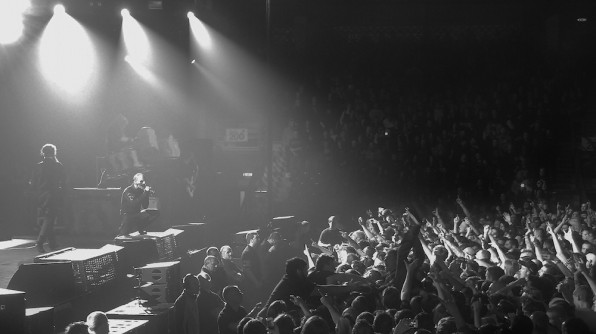 At this point, I need to say that I’ve never really been a fan of Slipknot and their particular brand of angst and rage. I’ve seen them a few times at festivals (let’s be honest, it’s hard to avoid them!) and the only memorable thing about those shows was the quite remarkable number of times frontman Corey Taylor said “fuck” or “motherfucker” whilst talking to the crowd. So would a headline gig change my opinion and would I leave a fully fledged ‘maggot’?

A large curtain descends as the stage is set for the headliners but from where we are seated we can see behind it and it appears to be a bit like a circus sort of setting with possibly the most cartoon-like goats head you could ever imagine looming above the back of the stage. Not quite Mendes, more Mickey Mouse. 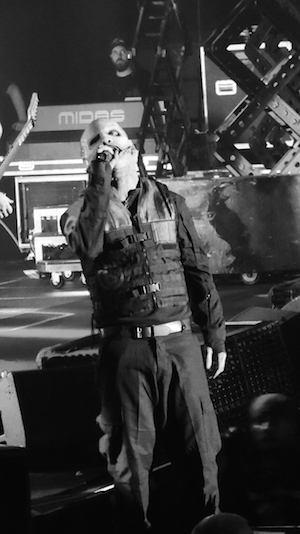 Anyway, before the curtain drops we see a few lads in black boiler suits milling around with various members of their crew adjusting the masks. That’ll be Slipknot then!

The curtain drops and the 9 piece band tear into ‘Sarcastrophe’ with a righteous fury and a blur of movement. The twin percussion attack of ‘Clown’ and erm, ‘Dick Nose?’ are mounted on spinning hydraulic platforms and are relentlessly hammered away at throughout the entire set, though they couldn’t really be heard in the sound mix, it made for good visuals.

I always associated Slipknot with genuine anger and chaos when they played live but the reality is they have become a very competent and slick stadium filling band. Perhaps I’ve got it totally wrong but it seems like the trappings of success have diluted the original rage that was present in their early days.

Corey Taylor didn’t let us down in the profanity stakes constantly reminding us that “You motherfuckers are insane” and how he “Fucking loves Newcastle and all the fucking Newky Motherfuckers”. Consummate professionalism from a man who is a lot shorter than I ever imagined!

I may be giving the impression that I’m a bit down on Slipknot and went with a closed mind, that’s not true. They were extremely entertaining and a very tight live band. It would be impossible not to be impressed at the sight of the entire arena sitting down during ‘Spit it Out’ and then on command “jumping the fuck up.” It’s just they’re not really my thing but the other 10,000 or so at the gig most certainly would disagree.

Slipknot return to the UK in June to headline Download festival (again).

Many thanks to Sally who was sat next to me for the quite incredible pictures she took during the evening.