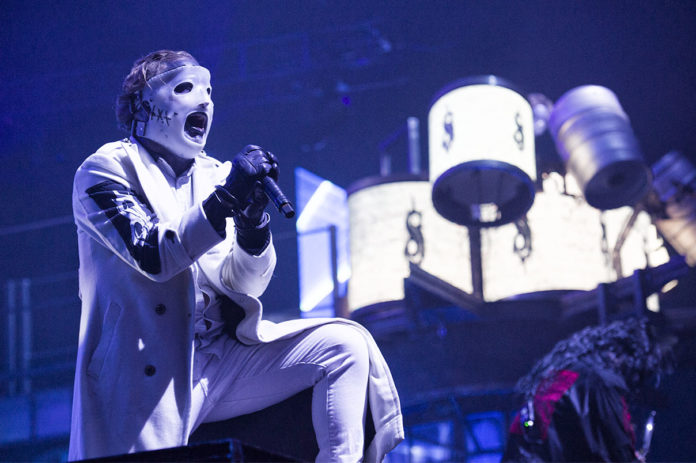 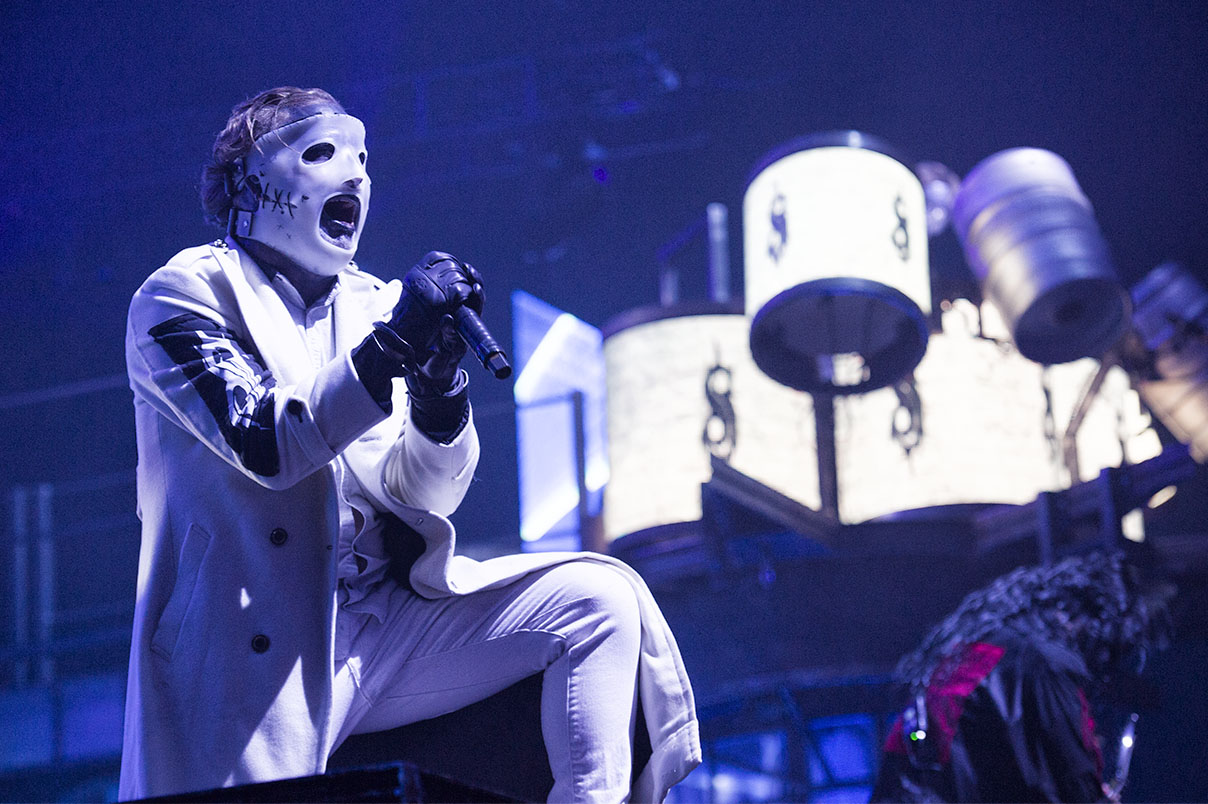 Slipknot return to the UK, revitalized and on the top of their game after the release of their triumphant sixth album ‘We Are Not You Kind’. Christopher Lloyd hits Birmingham to report, whilst Melanie Smith takes photos on the opening night of the UK tour in Manchester.

It’s been a turbulent few years for Slipknot, but they’ve managed to pull everything out of the bag on their latest album, which has been universally hailed as a return to form. To celebrate, Slipknot has bought their live extravaganza to our shores, and with them they have personally chosen the support band, Behemoth.

Behemoth frontman ‘Nergal’ takes centre stage on the mic, as his band assemble to perform a selection of tracks from their impressive eleven-album career. Nergal is cloaked in the regalia of an upper member of the clergy, and his face is a that of a tortured ghost. This tortured ghost has formerly been a celebrity TV judge on Poland’s version of The Voice, so you think there would be an element of melody to Behemoth’s sound, however, it becomes apparent that what they prefer to do is to joylessly crank out your classic death metal dirge. 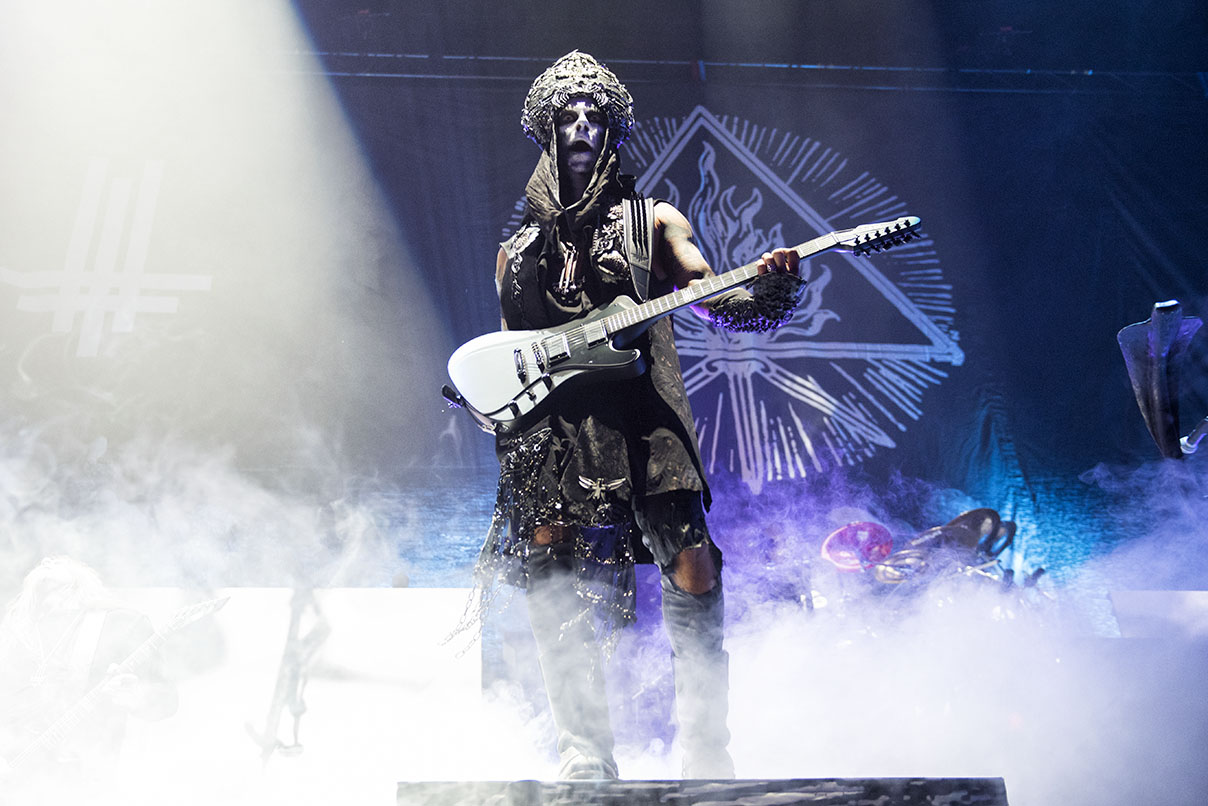 The set is heavy on the kind of metal that is so bereft of choruses or hooks that the initial blast of excitement at the cacophonous noise washes over you, soon wears off, giving time for your brain to ponder the irrelevant things in life, such as whether Behemoth are getting a good energy deal on their gas supply? They must be, based on the amount of flames they deploy onstage. As the final track blathered on indecipherably, the ghouls left the stage. Not for long though, it was time for Behemoth’s slight return. But this was by no way a James Brown cape throwing moment, no siree, they decided to come dressed like the Scottish Widows from the 1980’s life insurance adverts, bedecked with marching band drums, for a bit of a bang. I’m sure it was meant to be eerie. I wonder if my life is insured, I may be in the firing line after not enjoying the set of a bunch of doom warriors.

Whilst Behemoth used their scary imagery to cement their aesthetic as doom warriors, the beauty of Slipknot is that they choose to not live as their masked personas round the clock. They can be the nine scarily masked musicians that burst onto the rock scene at the tail end of the nineties with their lyrics full of dark imagery, and yet by putting down the masks they can switch off the theatrics to allow an element of honesty that identifies them as real, relatable human beings, ones that their ‘maggot’ fan base can relate to. Simply put, Slipknot are a night and day band. During Manchester’s set, they’re bedecked in white uniforms, yet here in Birmingham, they’re in Black. Day and night. The setlist is full of brutal, punishing rhythms, and yet they also contain songs that contain pure blasts of wondrously anthemic, radio-friendly choruses. Night and day. 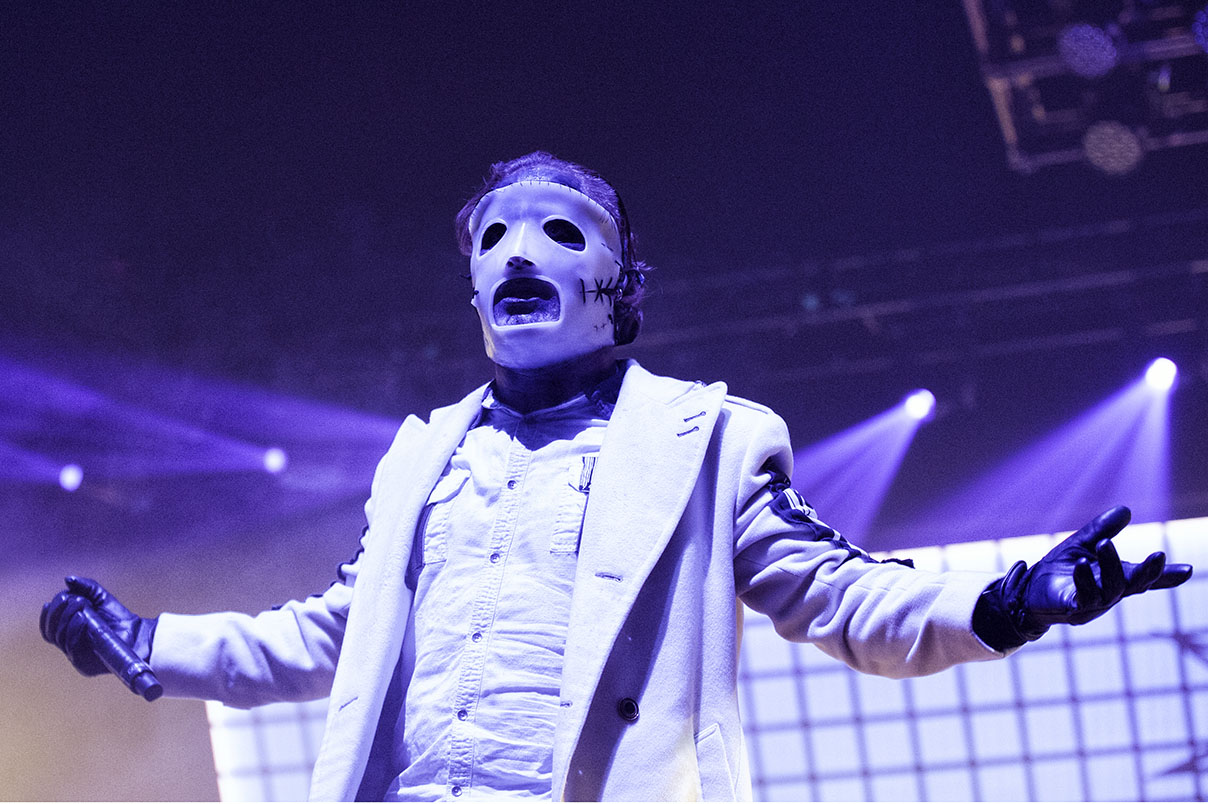 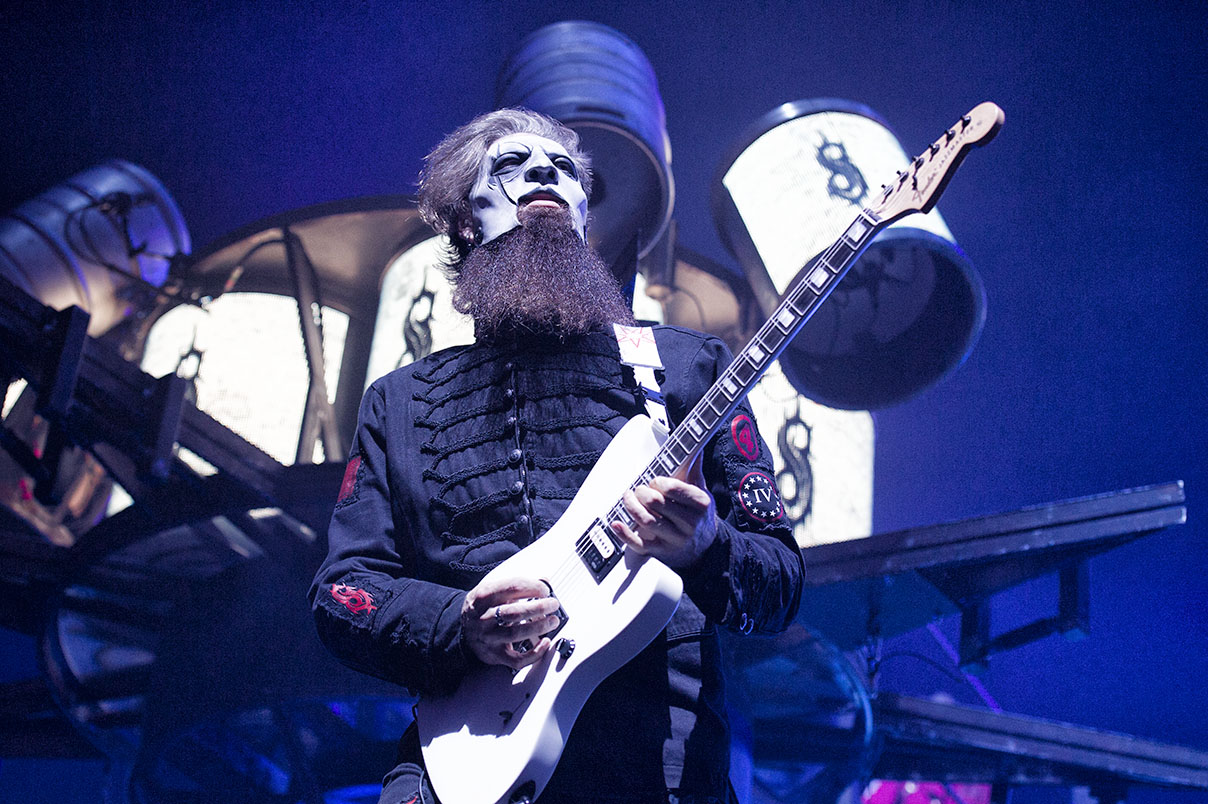 Slipknot are in the UK to tour their latest album ‘We Are Not Your Kind’. There were some initial doubts to the relevancy of Slipknot, six albums in, however, upon release it was made perfectly clear that this was the sound of a rejuvenated band, recording at the top of their game. It is a rejuvenation that has crossed over to the live shows also, for this is a Slipknot that absolutely smashes the rather lacklustre show I saw them play at the NEC just a few years back.

The stage set up was reminiscent of the blue room from Kill Bill, and the nine masked Slipknoteers slowly took to the stage, building the sold-out arena into a frenzy as recent single Unsainted hit its stride. Corey Taylor is upfront, bellowing out the choir-boy style chorus as various band members run all over the shop, often on lengthy treadmill style walkways, whipping 15000 maggots into a frenzy that pretty much never let up for a solid two hours. 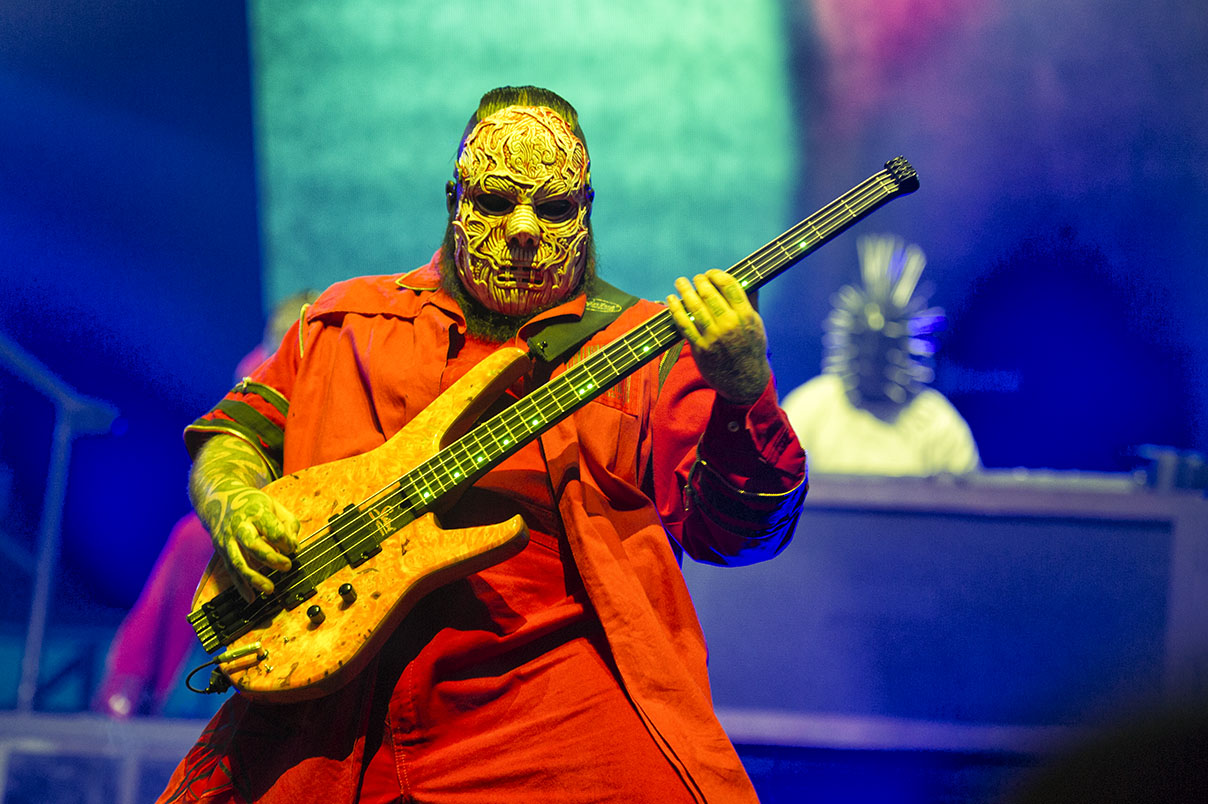 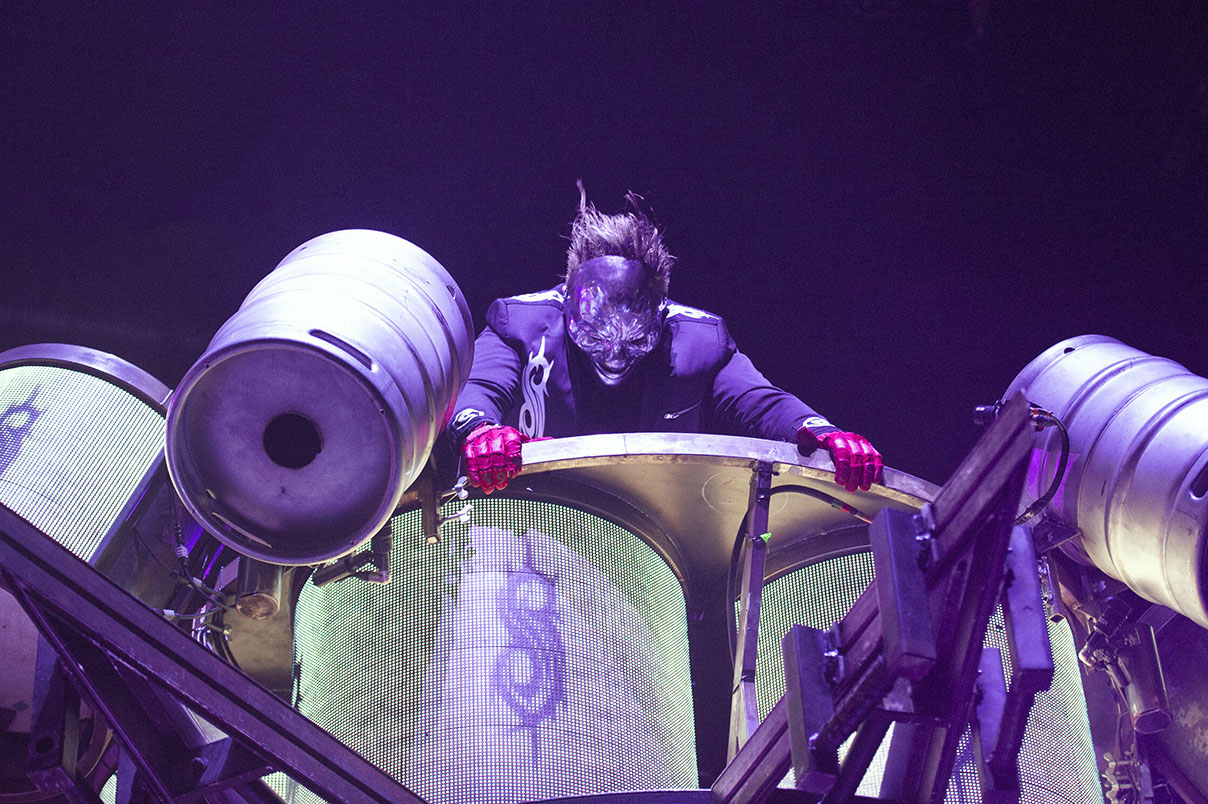 It was a set that eschewed the more melodic aspects of the bands career in favour of the heavy. It’s remarkable how popular and mainstream this band is, considering just how heavy their music can be at points, as demonstrated on tracks such as (Sic) from their debut album, and carried through to Nero Forte from their latest record. During Nero, the Kill Bill blue room style set transforms into a green, industrial landscape, complete with illuminated percussion stations that resemble eyes, eyes that are staring out at a crowd baying for riffs. If Slipknot are going to play sets as ferocious and invigorating as this, they’re going to certainly make sure their visuals are on an equal footing. There are flames, pyrotechnics, HD video projections, and explosions aplenty, and none of it feels lazy. For two solid hours I totally forgot that I was in a large arena, arguably the stalest of any venue, so immersed was I in the moment.

As the initial set draws to a close, Slipknot return to encore not with a batch of major chart hits, but with three hardcore classics that pummel the audience into a sprawling bundle of moshing glee. To pull off of a set this focused with the same fury and joyous noise that made the band so relevant back at the beginning of their career, and to do so without alienating their more casual fan base, whilst transporting them from feeling like their in the musical equivalent of an IKEA into a happening, is no mean feat. It’s a move that can only be performed by a band that, behind the masks, proves they are as passionate about their craft as they’ve ever been, and the fire is in their bellies once more.