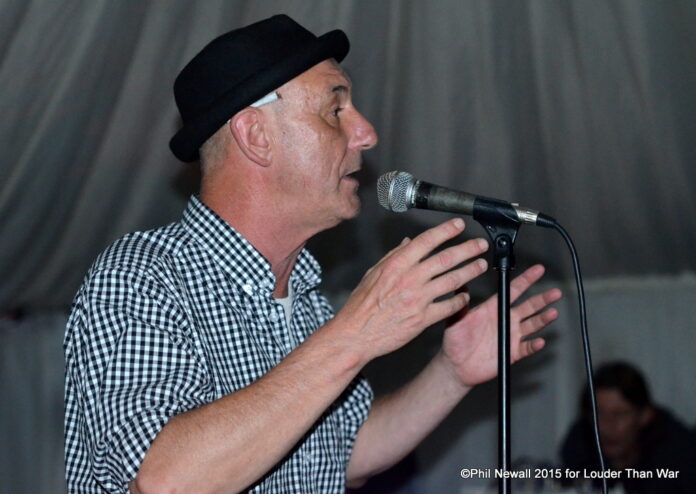 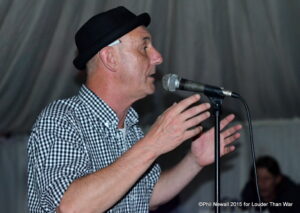 Slice Of Life stems from a desire to “do something different” – perhaps the most well-worn phrase in music, a worthy aim, but an aim that the majority of musicians fail to attain, often in spectacular fashion.

When Steve Ignorant first voiced his plan to explore a more acoustic vein, you could hear the groans of trepidation, hordes of black clad anarcho punks retreating further into their collective tepee’s reminiscing of days when Steve and his then bandmates in Crass were considered by many to be capable of challenging the very fabric of the country…

Slice Of Life might not be threatening to overthrow the Government or even provide the soundtrack; they do however, politely challenge the conventions of punk rock, the piano driven stripped to the bone songs are indeed something different, and particularly welcome for it…as if to magnify the differences tonight’s gig, hosted by grass-roots promoters Wirral Punk Gigs is held within what appears to be a wedding marquee positioned in the centre of Fort Perch Rock a former defence installation situated at the mouth of Liverpool Bay; built in the 1820s to defend the Port of Liverpool, its function has changed from defensive, to tourist attraction and museum and now punk rock venue!! 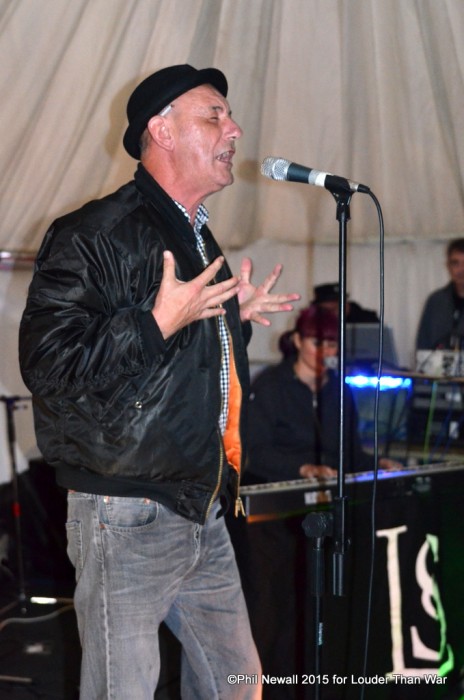 Steve without introduction appears on the low stage; casually dressed his appearance topped by a battered pork pie hat, a hand rolled cigarette wedged behind his right ear; his band Slice of Life sit arced behind him then launch into a selection of tracks drawn from their debut album ‘Love And A Lamp-Post’ (Overground Records) during the title track Steve’s verbal delivery is powerful and flawless, his Cockney phrasing adding poignancy to the lyric perfectly complementing the gentle acoustic motifs, Steve emphasising the meaning with subtle dramatic gestures, as the track concludes he discards his jacket then introduces each song with tales of his life – his home in Sea Palling, inviting us all to visit, his current role as a volunteer Lifeboat man…songs of contemplation like ’Happy Hour’ with its piano refrain reminding me of classic Madness; the songs at times are almost spoken word in delivery, others are almost lightly jazz infused, at least until abandoning the set-list – the familiar retort “Fuck the politically minded/there’s something I want to say” ignites the audience into battle cry “Do they owe us a living? Of course they do, of course they do” as the Crass classic closes Steve remarks that he still believes the lyric 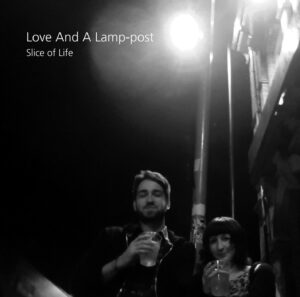 As if to reinforce the point he delivers ‘The Way Things Are’ a perfectly structured composition – Steve stood to the front of the stage, the venue is poorly lit – there are no distractions…literally nowhere to hide, and with none of the pummelling aggression Crass were famed for Slice Of Life depend on the strength of their songs; tonight’s performance demonstrates that Slice Of Life have strength in abundance, their songs are innovative and readily challenge many of the pre-conceived conceptions of just what defines punk rock…and then just as we are all getting out heads around it Steve introduces ‘Banned From The Roxy’ with a recollection of his previous visit to the area when he fronted Crass at Eric’s the almost mythical Liverpool venue that provided a stage for the likes of the Sex Pistols, Clash and The Ramones.

Slice Of Life presented a measured powerful performance, a performance that had all the intensity of Crass though delivered in a more palatable manner; I was struck by the honesty of the material and the gritty performance, Steve Ignorant remains an angry man, he’s just gained a few years and benefited from his experiences, and for that his Slice Of Life deserve your attention.