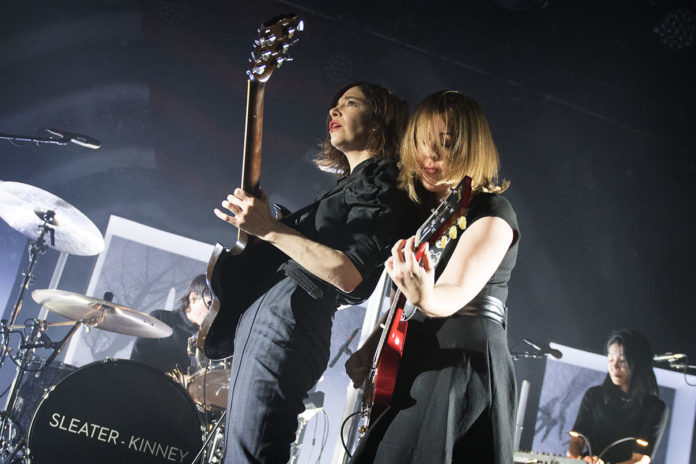 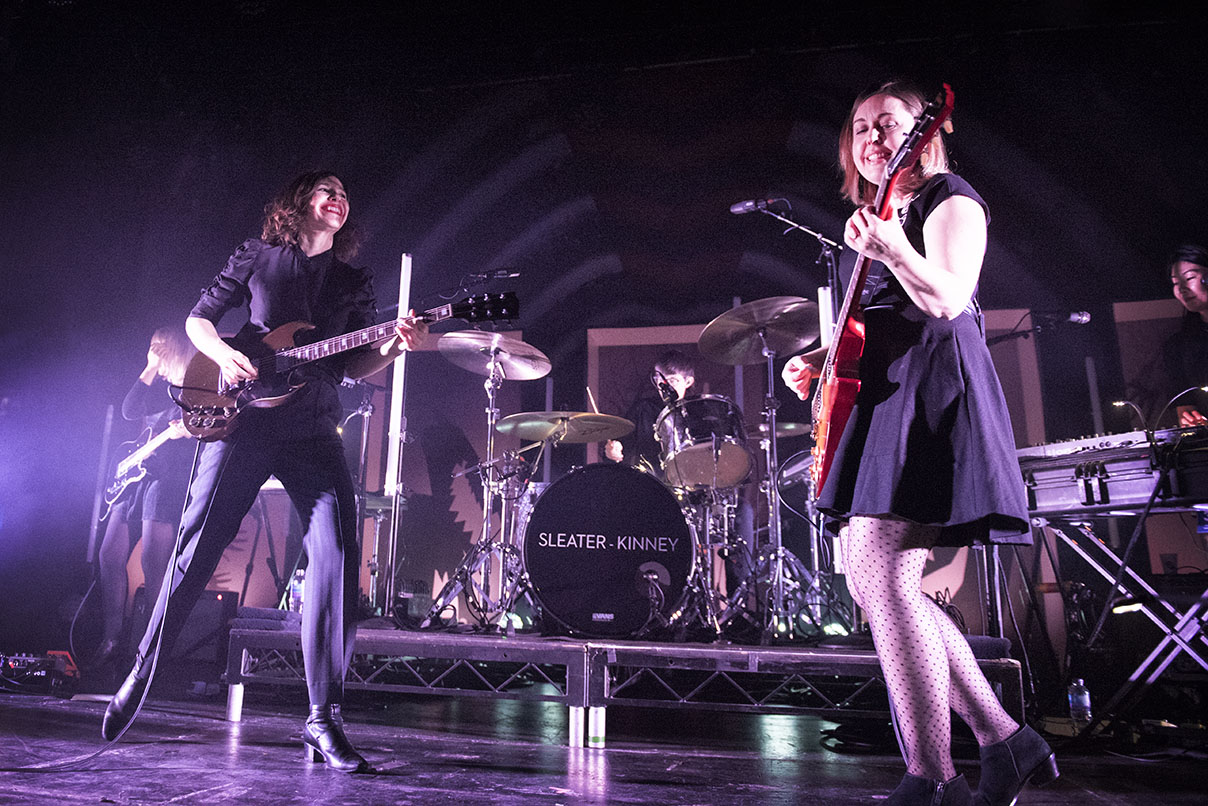 Cazz Blase and Melanie Smith witness an exceedingly on form Sleater-Kinney on their The Center Won’t Hold Tour, with strong support from Katie Harkin.

There aren’t as many people gathered to watch Katie Harkin and her bandmates as I would have expected, given the strength of her musical output. From teenage member of Sky Larkin to part of the Sleater-Kinney touring lineup to commanding solo star in the making, she has worked hard for this and I am vaguely disappointed on her behalf. Not that she is put off in any way. Her interactions with the crowd are friendly and assured; The Leeds native has spent her time offstage on this leg of the tour introducing her US bandmates (they are from Jacksonville in Florida) to the UK, leading to tentative visits to Argos and Greggs and the discovery that Tunnocks Teacakes are “Way better than S’mores!”

While it’s hard not to warm to her on a personal level, it’s also hard not to be charmed musically: Her songs are impeccably written melodic punk songs, very much complementing what Sleater-Kinney have always done, but alas, the crowd are only politely interested. That is, until the very last song, the surging synth tinged new single ‘Nothing the night can’t change’, which manages to sound both like an early eighties slice of synthpop and an outtake from The Center Won’t Hold. The crowd begin to draw in and take a bit more interest. Good. 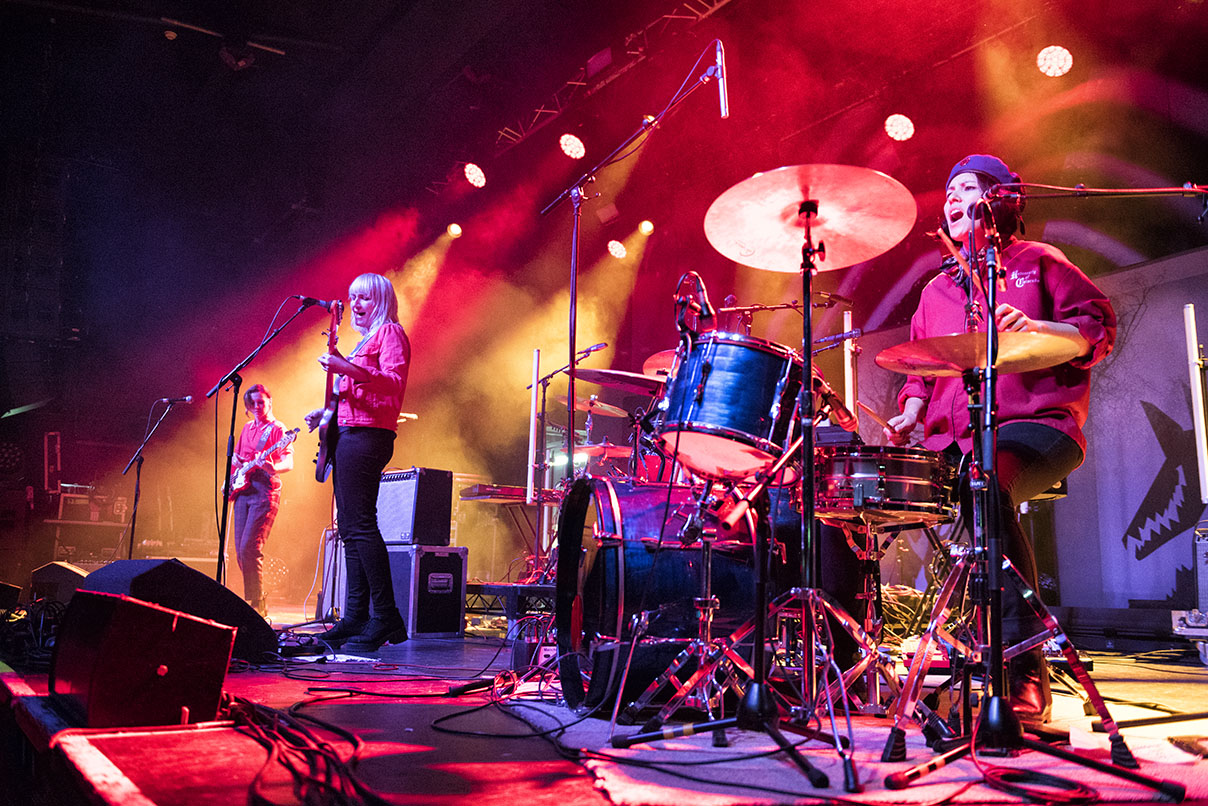 We wait what feels like a long time for Sleater-Kinney to take to the stage and when they do, it is in dramatic style. The lights go down, and a series of fluorescent tubes that have been affixed to the mic stands light up in stark red and white neon as the band begin to play the primal ‘The Center Won’t Hold’, the title track from their most recent album.

It’s a fiercely intense set dominated by tracks from The Center Won’t Hold, including the surging ‘Hurry on home’ and melancholic ‘The future is here’. There’s also strong representation from No Cities To Love, including the title track and ferocious ‘comeback’ single ‘Bury our friends’. Early calling card ‘Call The Doctor’ is on the setlist, as is the by turns tender and ferocious ‘One More Hour’ both of which go down well with the crowd, several of whom are probably catapulted back to memories of first girlfriends and broken hearts in the latter case. 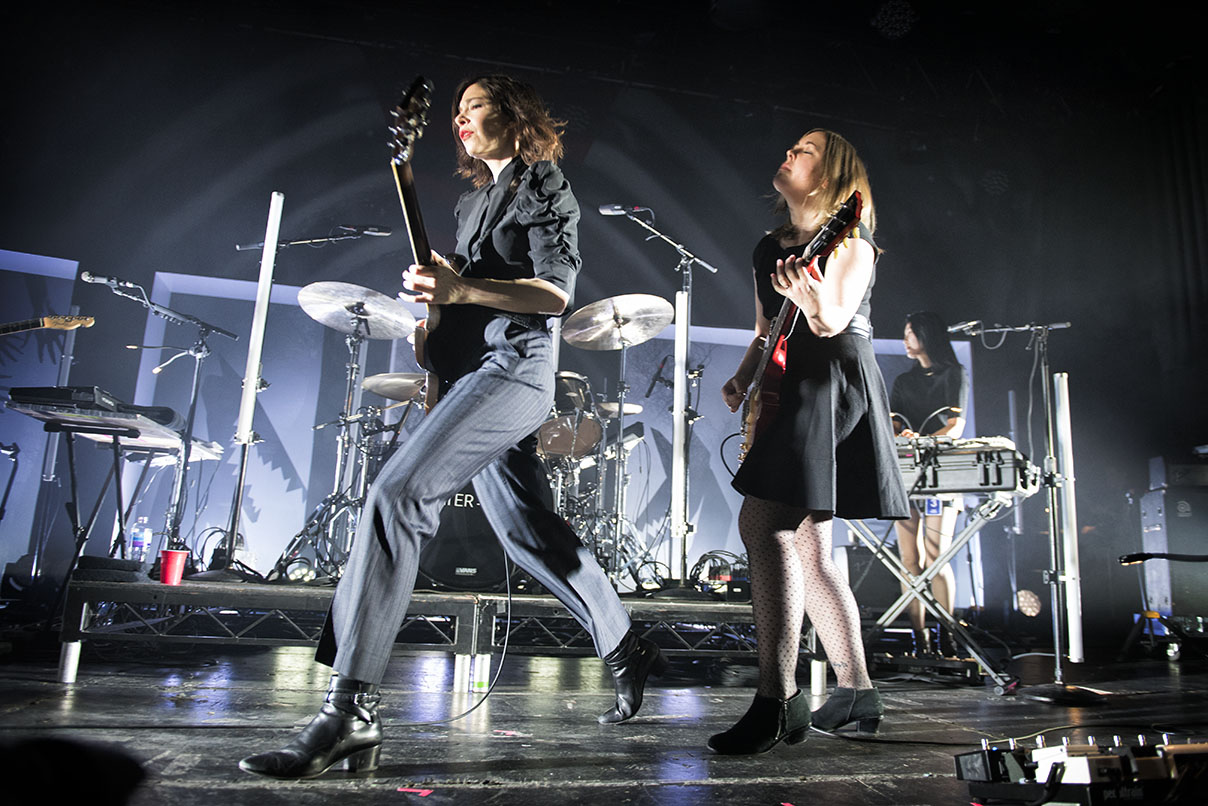 The crowd are the usual Sleater-Kinney crowd: Loyalists who have been following them for years and older rock fans. They are enthusiastic and boisterous in the extreme, as is to be expected. To one of the many cries of ‘We love you Corin!’ Corin replies, sincerely but matter of factly, ‘I love you too.’ The mood is musically intense but friendly.

While she has a fairly quiet physical presence onstage, it doesn’t prevent Corin from speaking to the crowd and telling an amusing story about cultural differences and expectations when dealing with hotel staff. Her stage presence is no less powerful than that of Carrie Brownstein, who grins from ear to ear for much of the set, and is clearly enjoying herself immensely as she catapults herself across the stage.

It’s not just that she is a fantastic guitarist, it’s that she moves across the stage like her instrument is a part of her. There’s an ease to both of their performances that comes not only from years of hard graft, but also from a sense that, since their return from long term hiatus in 2015, Sleater-Kinney have nothing to prove: They have the back catalogue, the live reputation, the fanbase, and the skill. They are, in short, a bloody good rock band, tight as fuck, exciting to watch, and always surprising. 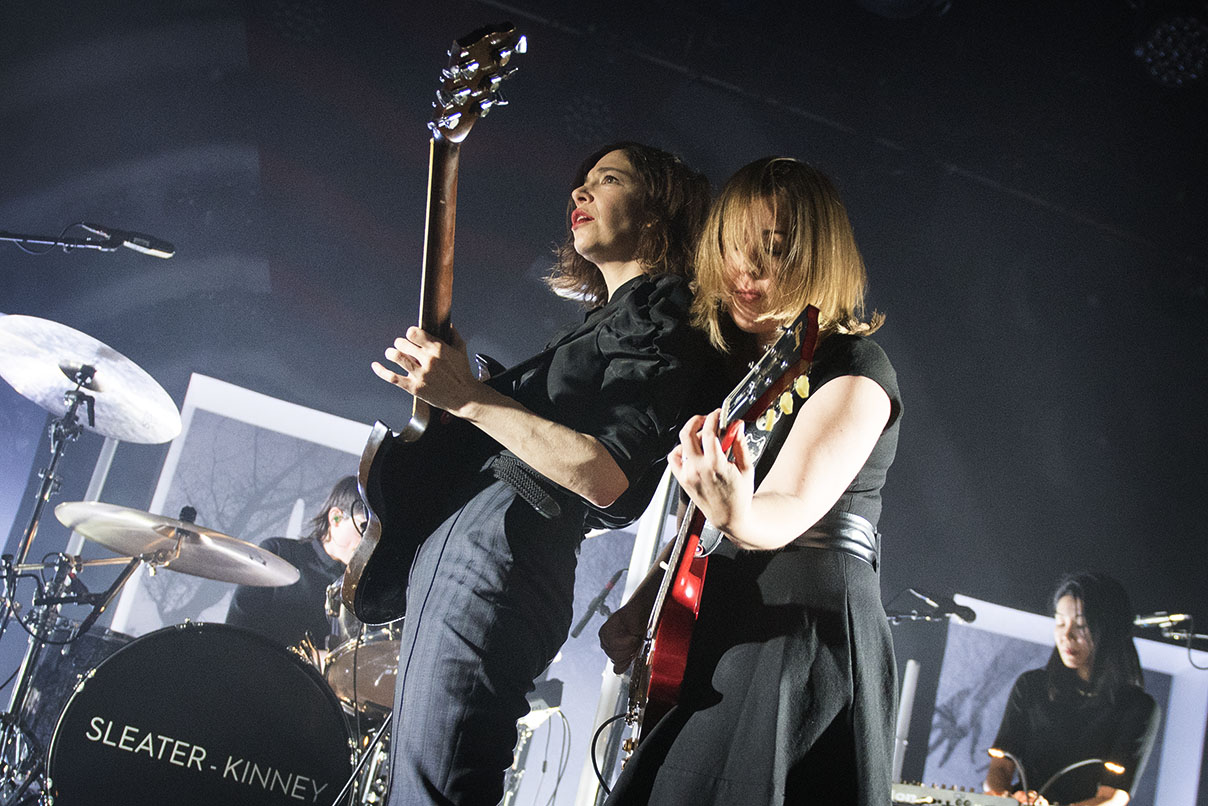 Take for example the bands choice of encores. Rather than return to the stage and hit the crowd up with more fast paced punk rock or impressively anthemic guitar workouts, the bands return to the stage begins with Carrie sitting down at the keyboard and Corin singing ‘Broken’, the final song from The Center Won’t Hold.

It’s a very quiet, stripped back song with a strong sense of vulnerability. The crowd shift a bit, perhaps feeling slightly awkward: This is not the Sleater-Kinney they are used to after all. I start to look around me to judge reactions. People are listening, by and large, but some are talking and not everyone feels as engaged as before. The band follow it up with the gentle semi acoustic sing-along of ‘Modern Girl’, a track from The Woods, and the sense of audience and band as one returns.

Sensing that the Manchester crowd preferred the ‘rowdier’ numbers, Sleater-Kinney return to fast searing punk soon after, before taking a slight handbrake turn again, this time into eighties synthpop, with a surprise cover of Laura Branigan’s ‘Gloria’, a song long associated with Signal Cheshire in the 1990s for me, but here transformed into a punk pop anthem that perfectly complements Corin Tucker’s voice. 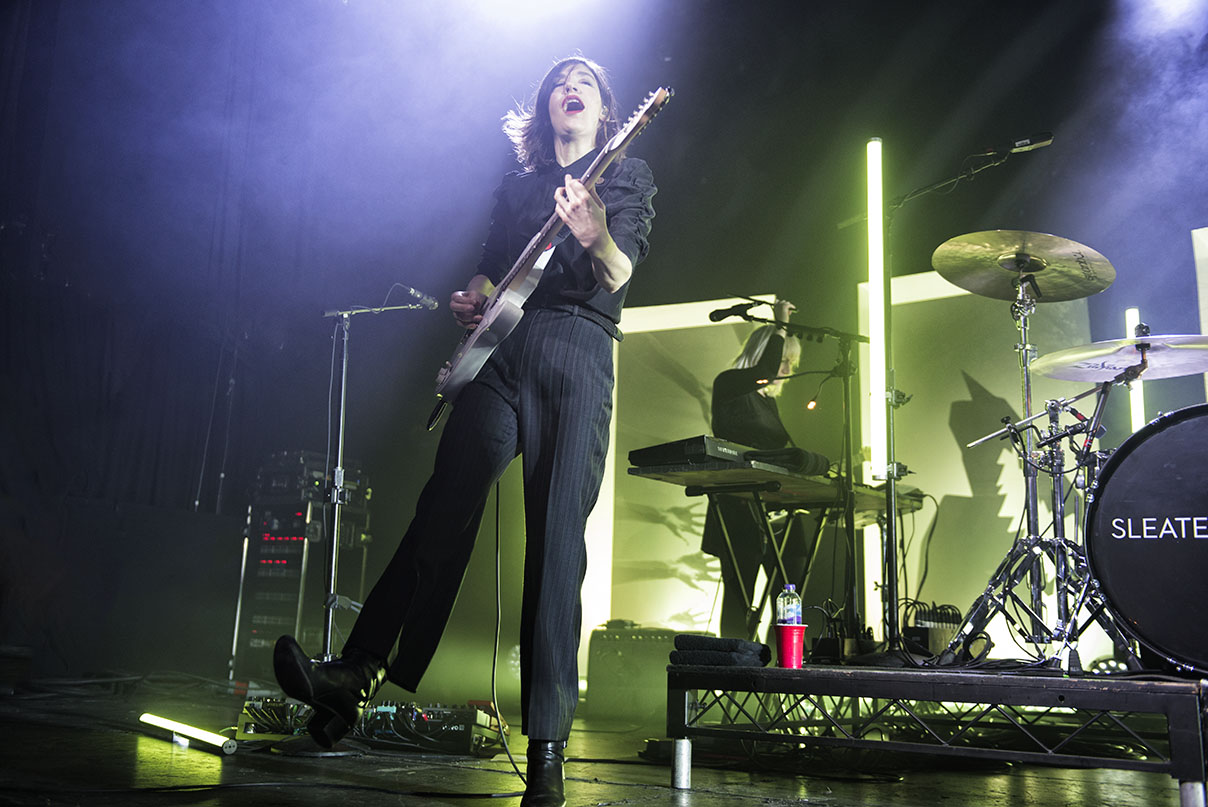 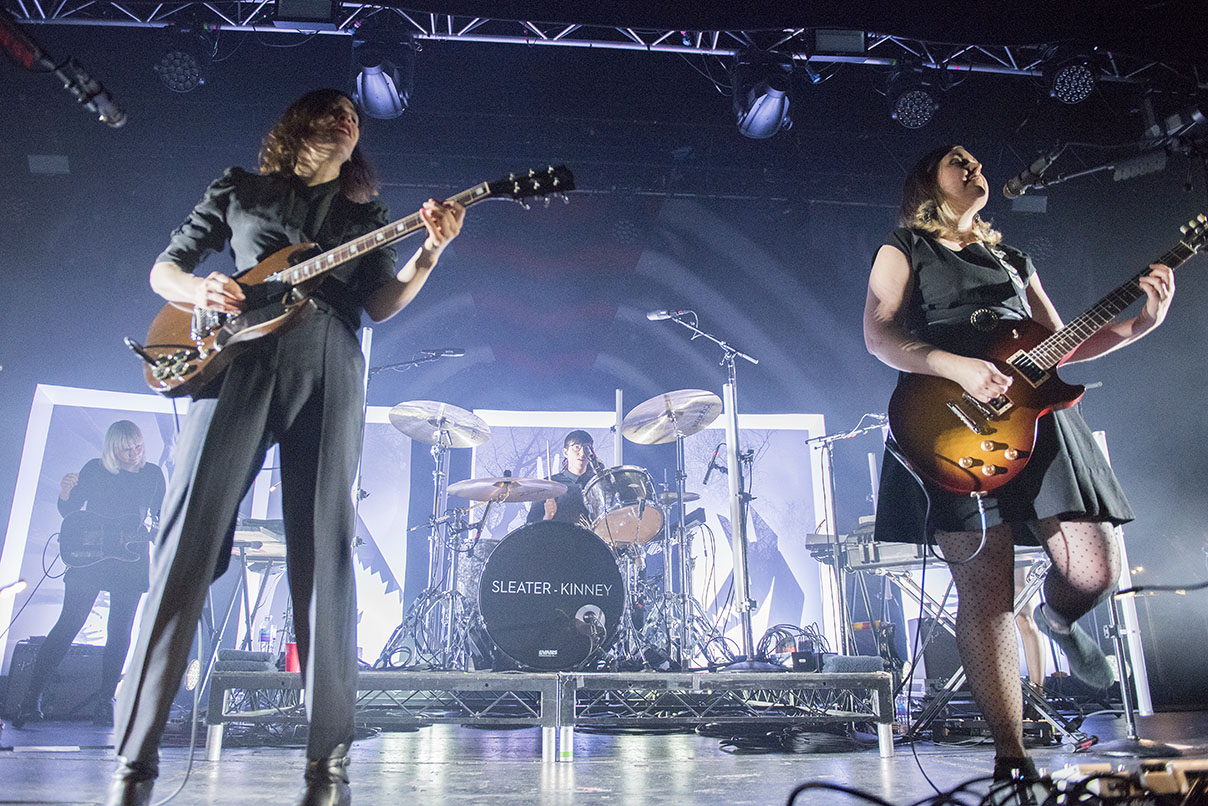 Prior to playing the final song of the night – ‘Dig Me Out’ – Carrie makes a nice speech about the comfort and power of coming together as a crowd at gigs when the US and UK are living through such polarised times. Her words are very well received and the band tear through ‘Dig Me Out’ and depart the stage in triumph, only to return mere seconds later to mingle with the crowd from the stage.

As the lights go up and we head for the exits, I feel like I keep on spotting every woman I’ve ever known in Manchester. This is a slight exaggeration, but I did see two people I used to work with and someone I vaguely used to know through going to the same club nights, in the space of about a minute and a half. A lot of my old friends in the 1990s were Sleater-Kinney fans, and most of them followed the band on their UK tours. All of these women have since settled down, got mortgages, got proper jobs, grown up. But I like to think that, every few years, they book a ticket to see the band and, just for a few hours, they’re back in that world again, screaming and jumping about with full bachanalian abandon.

To think there are music festivals that still can’t think of any women to book this year.