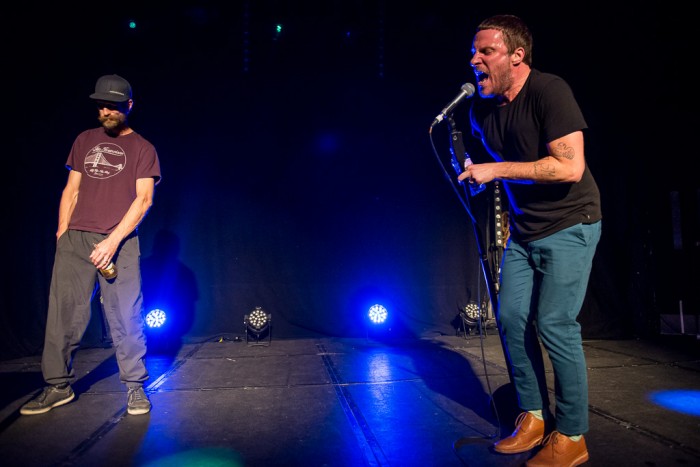 Photo above and all others on this page © Valerio Berdini.

Sleaford Mods return to Cardiff for the fourth time to play their biggest venue so far in the Welsh capital. Touring the acclaimed Key Markets, Simon Tucker (who was there for their first Cardiff gig) takes the trip again to see how the band will adapt to the bigger surroundings and what, if anything, has changed. Photos © Valerio Berdini, take in Cambridge.

Well, the cat is totally and utterly out of the bag now. That band we have been raving about for a few years have now burst forth onto the general public’s consciousness; creating headlines, scaring the middle ground, upsetting past-it rockers and stirring emotions in the minds of those who are fed up with the sadly decaying lives under this Bory rule.

The first change occurred during the release of 2014’s Divide and Exit. People woke up to the filth and the fury that is the Mods oeuvre. Acting as a clarion call for the disenfranchised, D&E laid its mast into the ground and to it we flocked. The accompanying tour was a vat of anger release and euphoria as we crammed into small clubs (in Cardiff’s case, the Moon Club), up close and oh so personal, like minded humans venting and projecting all of their inner demons onto the band who narrated our stories for us in a whirl of rapid-fire venom and razor-sharp wit. 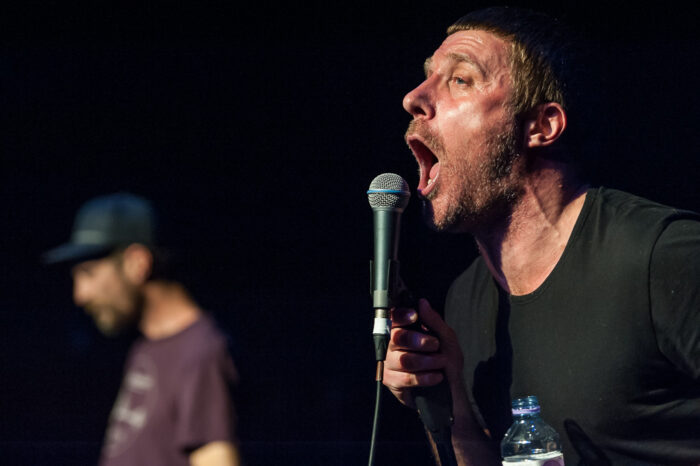 Now of course comes the ascent to the bigger venue, the logical next step, but with it comes fears and concerns. Will the impact be so visceral? Will we get the die-hard or the rubber-neckers? Those who love the band or those who are here to see what all the fuss is about?

Well the answer is somewhere in between. It’s fair to say the audience tonight were a very mixed bag. They seemed to take a while to get going and when they did you got a sense that there was most certainly a divide between groups. There were those that had obviously watched too many punk documentaries and thought that the done thing was to spit, smash into other people or lob pints at the band. Then there were the boo-ers. Yes, that’s right, some individuals actually booed them. It didn’t take a genius to work out that this was someone who’d had a few too many and was peacocking for his friends and it is also worth pointing out that this little heckle was dealt with gloriously by Jason Williamson who commented on the “backlash”. Then there were us who have come to enjoy this oh so important of bands and when it comes to the music and the performance itself, they did not disappoint. 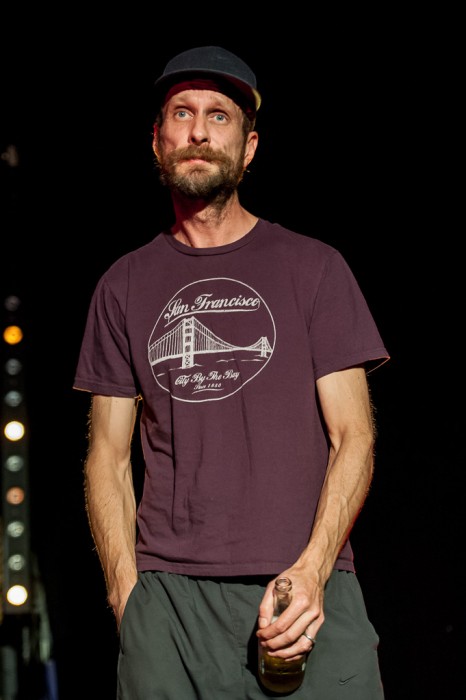 Steaming through a set that was weighted in favour of their critically acclaimed recent long-player Key Markets, the duo were more aggressive, sharper, and tighter than when I last witnessed them. Now you may wonder why I said “the duo” as, you are probably all aware of this by now, Andrew Fearn basically just presses play and bobs to the music, lost in it and his partners performance. The reason I did say “the duo” is because, for all the focus that is laid on Jason Williamson (more of whom later) on this tour you really get a sense of how thrilling the music actually is. This is no backing track, this is the bricks and mortar. Giddy On The Ciggies screams into life on a pure Techno tip, slamming hard and fast, freed from the constraints of a home hi-fi system. Bronx In A Six’s louche-funk seems stewed from the same pot as the Wu’s early work, No One’s Bothered drives a head-nod through the crowd like prime Fall, and Face to Faces grooves like a mixture of the Mondays meets Pixies. The impact the music has when played through such a system is a revelation and any fears that you may lose some of the impact of the Mods live show in a bigger venue is quashed almost instantly.

Then there is Williamson. You know what you’re going to get when you see Jason in full flow right? Wrong. Yes the same traits and ticks are still there but this time round his voice is more powerful, clearer and on-point. The years of touring are paying off as he handles all aspects of the crowd injecting humour when needed and vitriol when called for. Every sinew of his body strains to get these words OUT THERE!! Looking fitter than the last time I saw them, Williamson is now a bone-fide star (he’d probably hate this but it’s a fact) and as he bursts into Queen’s I Want To Break Free, you just know this guy loves fucking with expectations. Williamson does a few “hello Wales” shouts not far from the beginning which seems to wake up the lethargic of those in attendance and is sincere in his appreciation for the Welsh crowd when he acknowledges them at the end, even holding a Welsh shirt up which has been thrown at him before tucking it in his jeans for the rest of the rest.  How he manages to retain all those words in his head and get them out with sniper accuracy is beyond me (also, how the hell does he stop his throat blowing out after every gig?) There is no holding back when it comes to Williamson’s performance. When he delivers songs like Jolly Fucker (a real crowd pleaser and a song that Corbyn should have sung instead of God Save The Queen … now THAT would have caused a shit-storm) and closer Tweet Tweet Tweet you see a man that lives it as he breathes it every syllable created for impact whether that impact be on the listeners gut or mind. A tour-de-force performer at the top of his game, Williamson is the closest my generation has come to a Lydon or Bill Hicks, part preacher part satirist, ALL human.

If you’re unsure about seeing Sleaford Mods live don’t be. They will be everything you wished for plus more and I can’t wait for them to hit Wales again.

The photo gallery below (and photos above) come from the band’s Cambridge show a few days later. All are © Valerio Berdini.

Please note: Use of any images in any form without permission is illegal. If you wish to use or license any images please contact Valerio here: valerioberdini.com.