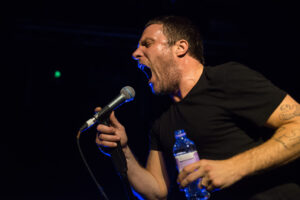 No pizzaz. No showbiz.

Sleaford Mods on Jools Holland was a startling moment.

A monochromatic blast from the other side of midnight. A missive from a world a long way away from comfy London media-land.

It was a great moment.

Like when a punk band got on Top Of The Pops in them old days – a moment when ‘one of our bands got through’.

The intensity of delivery was undiminished by the cruelty of TV and the band were as defined and perfect as ever. It looks even better seeing Andrew stand there, pint in hand after pressing ‘go’ on the laptop – an anti music gesture as he shuffles from one foot to the other- the perfect foil to Jason’s shut eyed poetic assault.

It should never work but its perfect.

Deceptively simple this is a stunningly effective music. Someone on my twitter feed called them the Crass of their generation and it’s kinda true. There is complexity in the simplicity and the brutal assault is only a mask for the paid and the angus and the emotional spree that is contained in the poetic an lyrical shards and snippets.

The Sleaford Mods felt like an event. This was not your usual TV fare and they will have split opinions everywhere like all the best bands ever did. Their black and white, their simplicity, their cutting away of the fluff and the bullshit was the perfect riposte to the grin and bear it culture of the mainstream pop parade and lets not forget Sleaford Mods are a pop music as well.

Someone else on my twitter said they got the shivers when the band played and I understand them.

This was a moment. A cultural moment. One of those rare moments when music TV crackled to life.

And Jools went nowhere near them with his piano…