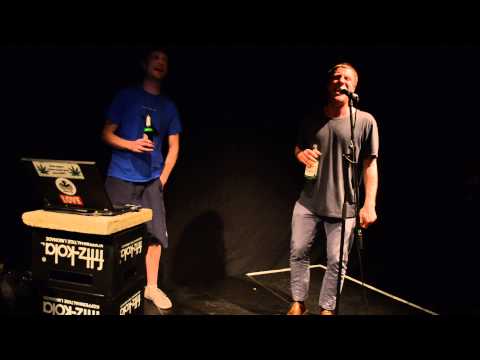 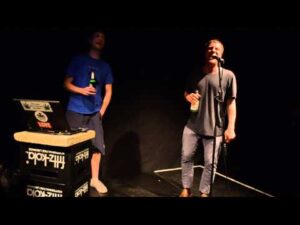 Sleaford Mods are not afraid to tackle their surroundings in song. Their music reflects a reality that has been ignored in favour of heartfelt indie wank, Edwardian facial hair andthrowaway lyrics of unbearable tweeness. The bottom of the barrel has been well and truly scraped and something is about to give.

With a laptop full of cheap riffs and a snarling absurdist take on societal ills Sleaford Mods are carving out their own path, veering away from the distractions of the circus. AndrewFearn provides the backing tracks, bouncing on his heels likethe last raver standing whilst Jason Williamson hits himself in the head, spewing a shamanic form of poetic tourettes into themic. Williamson doesn’t do heartfelt vowel sounds which have become the staple chorus of stadium acts. Instead, he barks out venomous and surreal rhyme schemes that hit you in the gut.

The crowd tonight are a mixture of oddballs, football heads and gurning casualties of all ages. It’s striking how many words people know and there’s a cathartic feeling in the room as people scream along with all the passion and belief of the voiceless finding a voice.

The set draws heavily from their last two albums and every track is an anthemic, social vignette which grips you with its realism. Very few people have captured the minutiae of modern life as vehemently as this before.

Sleaford Mods make music which does not concern itself with trends, money or befriending mediocrity. They are the antithesis of what the industry would deem as relevant. They’re in their early forties for a start and self released their first five albums to little fanfare. The sixth and seventh,Austerity Dogs and Divide and Exit have certainly pricked people’s attention though.

Whereas most young bands don’t last an album let alone hone their sound before being dropped after they’ve turned a profit, this Nottingham duo have slogged it out till they’ve become impossible to ignore. They are the crystallisation of a two decade bender, years of shit jobs and various musical culde sacs which have sharpened their sense of purpose. So muchso, that they cut through bullshit with the expertise of people who’ve had to crawl through it firsthand.

They have a fierce intelligence that will threaten people who are used to an idea of the lower orders being oiks on reality and talent shows, a form of harmless vaudeville entertainment viewed from a safe distance. Horrified that drug addled scroungers are given a platform to air their grubby little grievances. They shake the cage that others are content to decorate.

The puppeteers of popular culture are about as accurate at capturing the public mood as a City of London think tank and yet they still pull the strings. It may be foolish optimism after seeing both the Fat White Family and Sleaford Mods in one week but I’m willing to jinx it and whisper that the tide is turning. If bands like this can gain traction then there is hope.

Time will tell if Britain rediscovers its radical musical past any time soon, in the meantime Sleaford Modswill continue to carry the torch and keep the faith.

All words by Nathan McIlroy. More writing by Nathan can be found at his author’s archive.