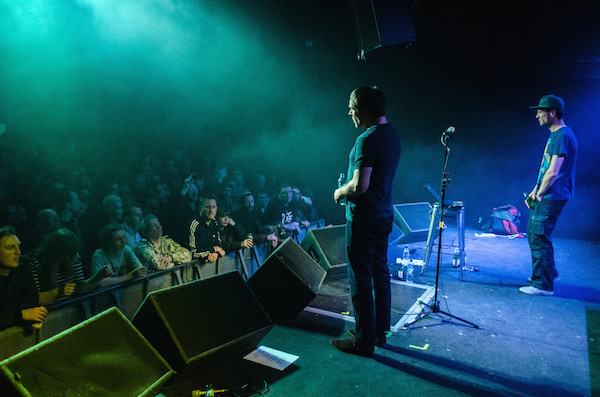 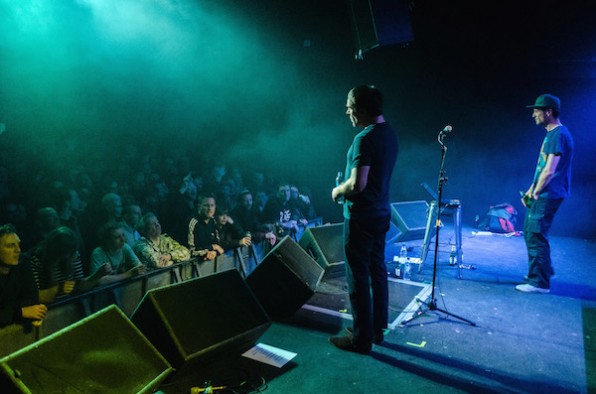 Photo above and all others on this page © Simon Parfrement

As we’ve referenced on many an occasion already, Sleaford Mods had an incredible year in 2014, culminating in what was no doubt a highlight for them – securing the number 4 slot in our albums of the year list! Two nights ago they returned to Nottingham for a triumphant homecoming gig, one that Louder Than War’s Stephen Murphy was in the audience for.

Musically, 2014 was a bit of a vintage year. From the release of the gloriously filthy Touch The Leather by Fat White Family, to the mind bending return of Aphex Twin, there seems, in retrospect, to have been a continuous, year-long rolling program of life affirming releases, all jockeying for attention and ear time.

The big bastard cherry on top of 2014 though, was the massively deserved, if slightly unexpected rise and rise of Nottingham’s Sleaford Mods. Deserved – because last year’s Divide and Exit was an absolute stone cold classic. An LP stuffed to the gills with brutal tunes and confrontational / angry / ugly / hilarious tales of life in contemporary Britainn. Unexpected – because breakout success for forty something blokes doesn’t happen very often, especially when you consider that the music being produced is bass driven / expletive laden streams-of-consciousness, that would probably put your nan in an early grave if she heard it. But even with the odds stacked against them, Sleaford Mods managed to became one of the most talked about bands of 2014, and now in 2015, seem primed for even greater success.

So, after a mental and memorable twelve months, tonight’s gig at Nottingham’s Rescue Rooms feels like a triumphant homecoming. The place is packed, and the sense of excitement and expectation is palpable. Before Sleaford Mods fire up their trusty laptop though, there’s the not insubstantial matter of tonight’s support act, Kagoule.

Despite their relative youth, Kagoule (consisting of Cai-vocals / guitar, Lucy-bass / vocals, Lawrence-drums), have been a staple of the Nottingham’s music scene for the last few years. With an album release imminent, and a reputation as one of Notts best live acts to live up to, tonight seems just as important for them as it does for Sleaford Mods.

As soon as Kagoule launch into the first song of their set, there’s a very real sense that something really quite extraordinary is happening. Waves of Placebo / Nirvana-esque guitar histrionics kiss the ears and tickle the pleasure centres of the brain, but just when you think you have the band pegged as nu-grunge disciples, they throw in some fabulous boy / girl harmonies, then a sprinkle of My Bloody Valentine noise terror – just to take their likability up to fucking 11. Songs like It Knows It and Adjust the Way sound like big fuck-off classics of tomorrow, and their sheer brute physicality means that once heard, you have no choice but to kneel and pray at the altar of Kagoule. 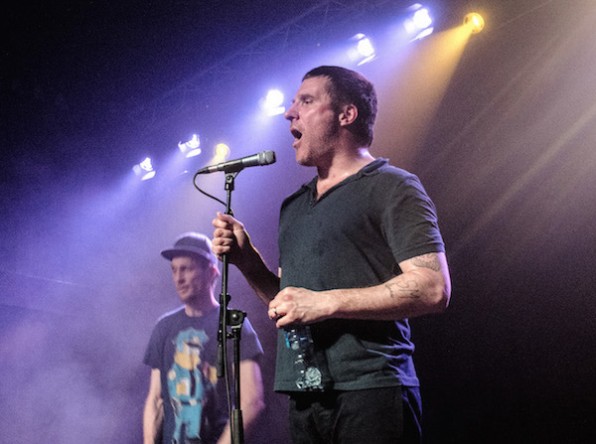 To a soundtrack of applause and exuberant whooping, Sleaford Mods amble out onto The Rescue Rooms stage and immediately begin the process of making ninety percent of all other music look redundant and silly. Just from a purely aesthetic viewpoint, the juxtaposition of happy smiling beat master / laptop fiddler Andrew Fearn and the snarling, twitching, pacing figure of Jason Williamson is something I could watch for hours – even if I was completely deaf; but it’s the songs, Oh Dear God, the songs, that place Sleaford Mods in a league of their own.

Kicking off proceedings with Bunch of Cunts, Jason Williamson stalks the stage like a Tourette’s ridden Larry Grayson / Mick Jagger hybrid. The sight of him gurning and gesticulating, whilst shouting out the bile stained, stuttered refrain of ‘bunch of cunts’, ‘bunch of cunts’  is like witnessing a very public nervous breakdown, and is perhaps one of the greatest opening salvos to a gig I have ever sent!

This eye popping intensity is somehow maintained with the frenetic stream-of-consciousness that is Mr Jolly Fucker, the benzodiazepine crawl of Mcflurry, and the Johnny Borrell bothering, 6 Horseman (The Brixtons). It is perhaps though a triumphant Tied up in Nottz, and the sound of a roomful of people shouting out ‘with a Z you cunt’, that leaves the most lasting impression. 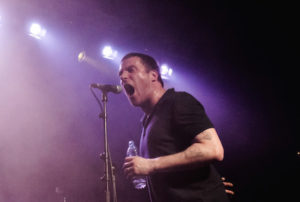 An even stronger political statement is the last hurrah of the night, an absolutely barn storming Tweet Tweet Tweet. Considered by some to be this generations Ghost Town, Tweet Tweet Tweet perfectly captures the frightening uncertainty of the times and is perhaps Sleaford Mods greatest musical achievement so far. The way Jason Williamson spits out the lyrics and contorts his face into a rictus of utter lunacy, only heightens the demented power of the song. Absolutely. Fucking. Terrifying.

As a beer soaked, ear ringing evening finally comes to an end, it’s easy for hyperbole to bubble to the surface, but I have to say, that even with musicians of the calibre Fat White Family and Aphex Twin carrying on where they left off in 2014, Sleaford Mods are undoubtedly the most important band in the UK at this precise moment. Don’t believe me? Go and see them for yourself. It’ll change your life.

Many thanks to Simon Parfrement for the photos.